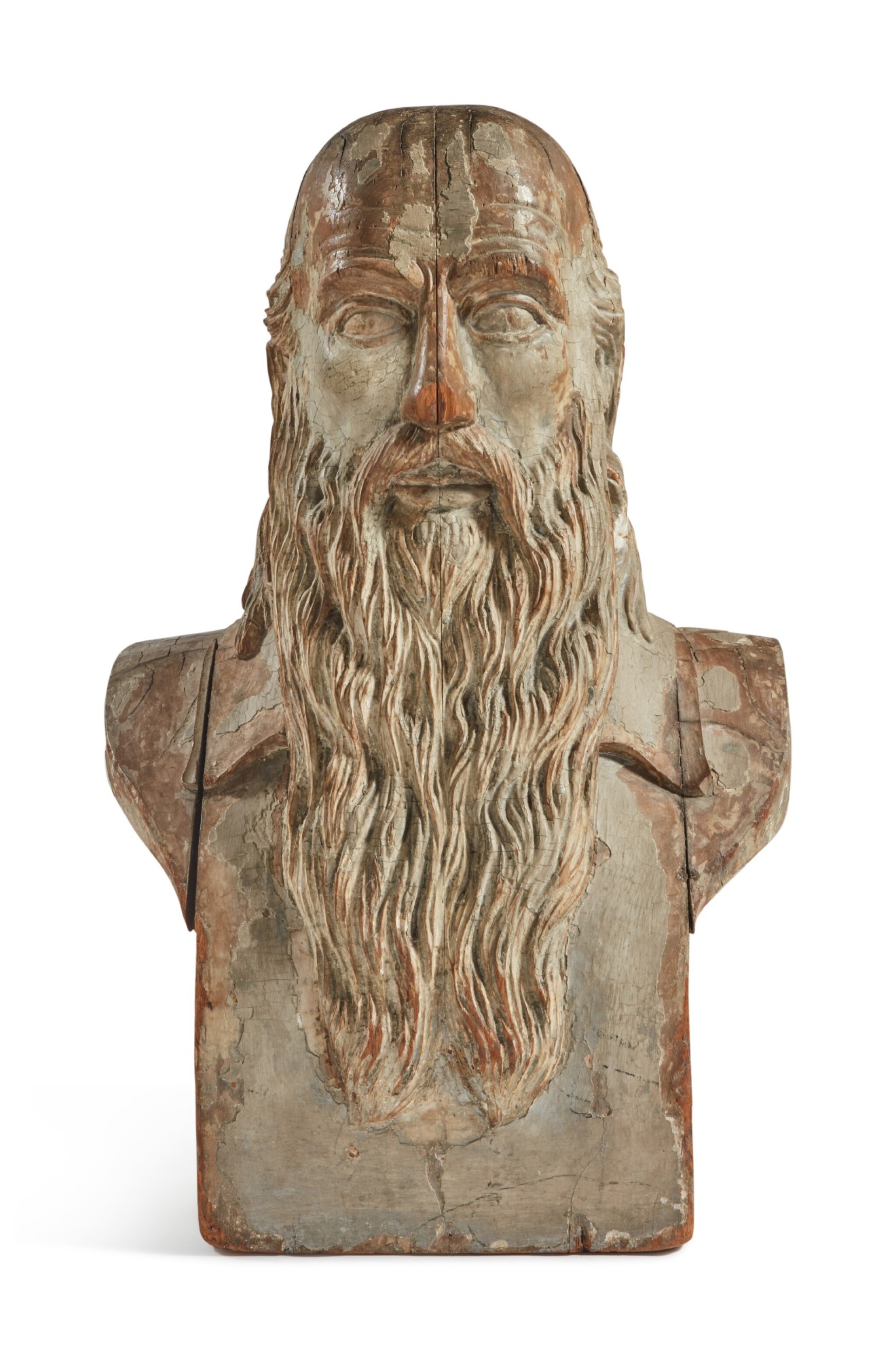 WITH: Two chromogenic prints of Lizzie Himmel's photograph of Andy Warhol and Jean-Michel Basquiat posing with the da Vinci bust (one 6 x 6 in, and one 8 x 8 in)

AND: Jean-Michel Basquiat. The Radiant Child. A Film by Tamra Davis, 2010. DVD.

THE RENAISSANCE MASTER WHO INSPIRED A MASTER OF THE MODERN ERA

We can see the influence of Leonardo da Vinci on Warhol as early as 1963, the year that the Mona Lisa was exhibited for the first time in New York. The ensuing media frenzy caught Warhol’s attention, and inspired by the hype of the portrait, Warhol unveiled his own version of the masterpiece, repeating her smiling face 30 times in Thirty Are Better Than One (1963).

Warhol would again look to the past for inspiration in the 1980s, obsessively creating his own Pop renditions of Renaissance painters such as Sandro Botticelli, Piero Della Francesca, Lucas Cranach the Elder, and Paolo Uccello, as well as the Modern icons Giorgio de Chirico, Henri Matisse, Edvard Munch, and Pablo Picasso. Through his reproductions of iconic works, Warhol showed that a famous artwork can be just as commoditized as a can of Campbell’s soup. “In the 1970s, he revisited the image of the Mona Lisa once more - this time as a comment on his own status at having arrived at the highest level in the pantheon of art history” (Kenneth Goldsmith, in: Warhol “Giant” Size. Phaidon, p. 498)

While it is unknown exactly when Warhol acquired the bust, the earliest documentary evidence of it being in his possession occurs in 1974-75. A photo by Bob Colacello shows the front room of the Factory, which moved to 860 Broadway in 1974; the photo shows Warhol and the president of Andy Warhol Enterprises, Fred Hughes with bust prominently posed on the table. (Bob Colacelo, “Holy Terror: Andy Warhol Close Up”, 2014). In 1975, it became the subject of one of the numerous Polaroid portraits Warhol snapped of friends & celebrities.

Through the 1980s, Warhol staged the bust time and again in a variety of photographs at the factory. In the spring of 1981 he thoughtfully posed with it at the other end of his desk at the Factory, his collection of Halston shoes and a typewriter set between them. It was one of many photographs which were unveiled by Manhattan’s Maison Gerard gallery in their exhibition “Two Days in the Life of Andy Warhol” from Dec 10th 2015 – Jan 7th 2016. (See: https://www.architecturaldigest.com/gallery/rare-photographs-of-andy-warhol )

A catalogue of Waddington Galleries, London, on an exhibition “Andy Warhol (After de Chirico)” held from 14 October - 14 November 1998, features a photograph of the bust on the back cover. The photograph is used for the front and back flap: Andy Warhol sketching in his studio, the bust behind him and looking over his shoulder at his work; against the Leonardo bust part of Andy Warhol’s work “Italian Square with Ariadne (After de Chirico) 1982” is visible.

In 1984, photographer Timothy Hursley took several photos at the Factory, and several feature the bust, including one of Warhol, Keith Haring and Bianca Jagger seated underneath the bust (during taping for Andy Warhol’s Fifteen Minutes, for MTV); one of Fred Hughes seated in the same spot; and another, of the bust on a high shelf in Fred Hughes’ office, above two of Warhol’s portraits of Elizabeth Taylor. (Timothy Hursley in Andy Warhol “Giant” p.575 Last Call)

Perhaps the most iconic photograph to feature the bust was that taken by Lizzie Himmel in 1985, with Andy Warhol seated next to his protegé Jean-Michel Basquiat. The bust would also appear in Tamra Davis’ excellent documentary, “Jean-Michel Basquiat: The Radiant Child”, during an interview with Basquiat and Warhol where they are seated under the bust.

Belgian art collection acquired from the above;

Private collection E.J. Philips, Netherlands, acquired from the above;

A European collection, acquired from the above in 2012.

Appearing in: Jean-Michel Basquiat. The Radiant Child. A Film by Tamra Davis, 2010.