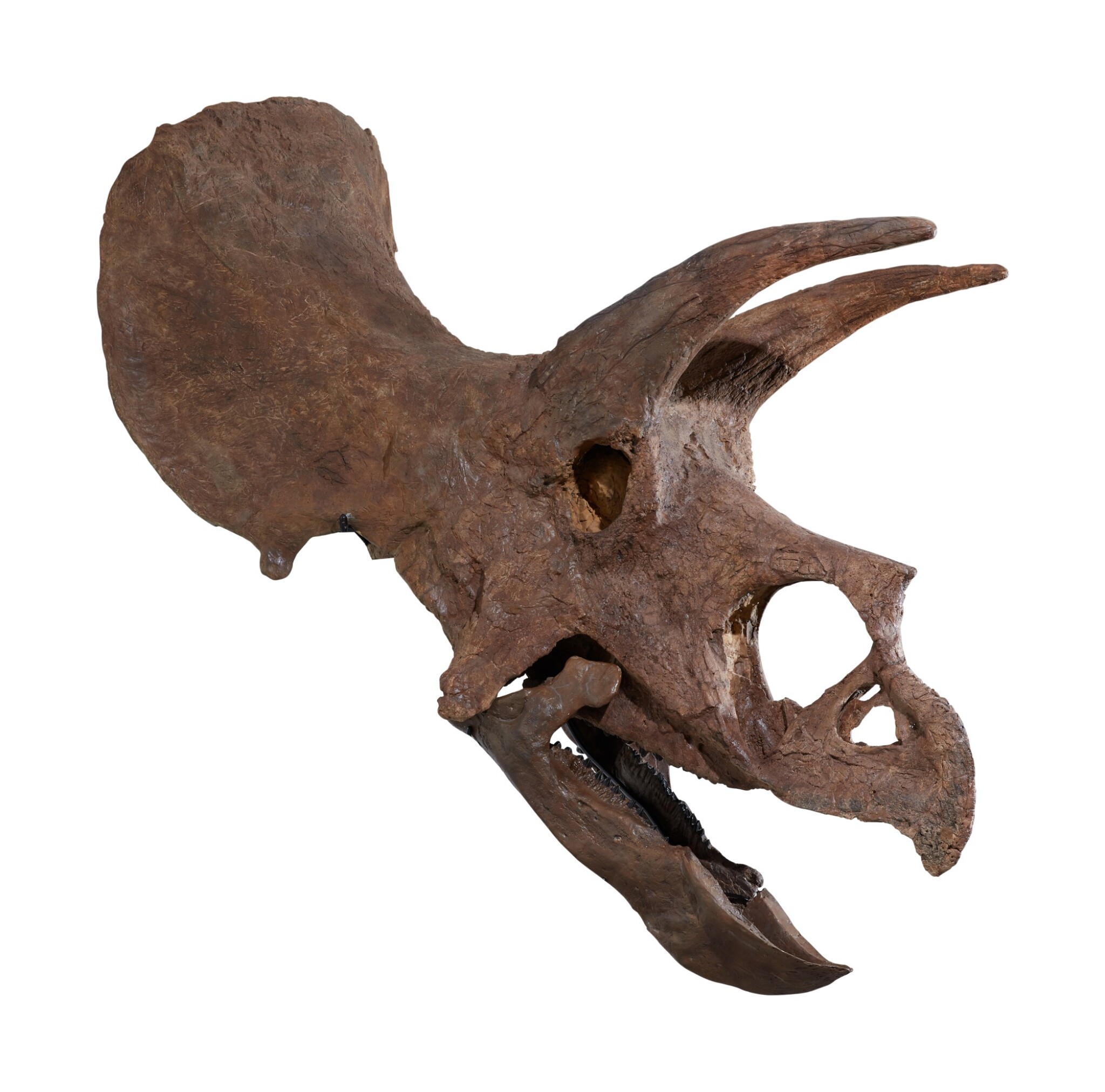 Excavated the last week of July 2018, approximately 25 miles due south of the city of Newcastle in Weston County, Wyoming.

ONE OF THE LARGEST AND MOST COMPLETE TRICERATOPS SKULLS TO HAVE EVER BEEN FOUND INTACT- EXTRACTED FROM THE SURROUNDING GANGUE IN A SINGLE BLOCK.

Arguably the most important part of the Dinosaur skeleton, skulls are rare and even more so when found in one block such as this, and of this large size.

The Triceratops was a large quadruped herbivore whose name literally means "head of three horns,” having two long horns stemming from the forehead, and a third, shorter horn rising from the nose, which terminated in an unusual, toothless beak. The large bony collar behind its skull functioned as a shield, protecting the skull, neck and shoulders from attack by large predators, such as the Tyrannosaurus rex, which lived during the same period in the same region. It is one of the most recognizable dinosaurs, probably because it is often represented engaging in mythic battles with the very same Tyrannosaurus rex. Despite the formidable power and ferocity of the Tyrannosaurus rex, it seems like the Triceratops was able to hold its own.

It could grow up to nearly 25 feet in length, and weighed up to 6 tons. The present specimen was that of a very large, and likely old male. Its exceptional size, coupled with the lack of puncture marks in the bony collar would indicate that it died of old age.

This species of dinosaur was discovered by John Bell Hatcher in 1886, and it comes from the Marginocephalia clade of the Ornithischian order, which includes all dinosaurs with bony ruffled collars or a developed cranial skullcap. This particular Triceratops comes from the family of Ceratopsides, which have short bony collars.

The Latest Cretaceous, Hell Creek and Lance Formations are some of the most fossil-rich rock units in the United States, if not the world. Every year, both public and private groups travel to Montana, Wyoming, North Dakota and South Dakota in pursuit of these remains and every year they return with new skeletons, isolated elements and teeth. These important fossils have helped change the way we look at dinosaur anatomy, physiology, ecology, evolutionary history and of course, the end Cretaceous-Paleogene extinction event.

The Hell Creek and the Lance Formations are generally considered to be equivalent terrestrial units. That is to say, that they were deposited at approximately the same time during the Maastrictian epoch, approximately 66-67 million years ago, along the eastern margin of the primordial Rocky Mountains. Despite a few structural and localized faunal differences, they are sedimentologically very similar. They typically consist of alternating, “somber-colored” (tan to grey to maroon), fluvially deposited, conglomerates, sandstones, siltstones, shales, mudstones, freshwater limestones, minor coal seams and the occasional volcanic ash bed, rich in bentonite. Yellow, red-brown to orange to even, black, siderite-limonite iron concretions and secondary concretionary horizons are very common. Like most fluvial systems, it is highly variable. Unlike the overlying Paleocene, Tullock or Ludlow members of the Fort Union Formation, which often have laterally continuous beds and thicker coal seams, the Hell Creek and the Lance shift depositional environments rather quickly leading to a more chaotic look and feel. The Hell Creek Formation tends to be more rich in mudstones and carbonaceous shales, whereas the Lance tends to have more fine grained sandstones and siltstones. The Hell Creek is on average, around 90-100 meters thick (Murphy et. al 2002; Depalma 2010), whereas the Lance is further south and west, closer to the source of the sediment, and thus, considerably thicker. Some estimates suggest that the Lance can be over 600 meters thick in some of the interior mountain basins of Wyoming.

The Lance Formation was first named and officially described by John Bell Hatcher in 1903 for exposures along Lance Creek, Wyoming. Prior to this time it was simply referred to as the “ceratops beds”. Important expeditions related to its description or to collections from it, include the: Hayden and Meek surveys of of the 1850's and 1870s; the Hatcher expeditions of 1890-1893, The University of Wyoming expeditions of the 1950's -1960's, The University of California Berkeley expeditions of the 1950's to 1970's (Clemmens and Hartman, 2014), as well as dozens of both public and private teams which come out each and every year.

The Hell Creek Formation was not formally described until 1907, by Barnum Brown for exposures along Hell Creek, several miles north of Jordan, MT. Important explorations include those made in the 1850's by Hayden and Meek, and of course, those made by Brown himself between 1900 and 1910. Additional major expeditions included: The Science Museum of Minnesota expeditions of the early 1960's, the LA County Museum of Natural History expeditions of the mid 1960's to 1970's, the UCCP expeditions of the 1970's-early 2000's (Clemmens and Hartman, 2014), the Museum of the Rockies, Hell Creek Dinosaur Project from 1999-2010 (Horner et. al., 2010; 2014) and the Marmarth Research Foundation expeditions of the late 1990's and early 2000's. Work on the South Dakota side of the line continued with explorations by the South Dakota School of Mines and Technology throughout the 1980's and 1990's... At present, there are at least 60 different museums, science centers, universities, commercial collectors, ranchers and private collectors which dig and explore these units annually.

These formations represent an ancient coastal floodplain environment, filled with swamps, low-land forests, estuaries, broad, but shallow, river systems and occasional lakes. As the Rockies slowly rose to the west, the Hell Creek and Lance Formation expanded eastward, filling in the great basin that was the Western Interior Seaway. Along this irregular, swampy coastline, dinosaurs flourished.

To date, over 20 different genera of dinosaurs have been found with new specimens discovered each year. The ceratopsians are represented by at least three genera; Triceratops, Torosaurus, and Leptoceratops. An additional two others, Tatankasaurus and an unnamed ceratopsian may also exist, though the latter has yet to be formally described and debated. Hadrosaurs are represented by several species of Edmontosaurus and possibly by a rare genus known as Anatotitan. Thescelosaurus is the primary small ornithopod, but there has been some isolated evidence to suggest the possibility of another unknown Hypsilophodontid. Pachycephalosaurs are represented by up to four genera. These include Pachycephalosaurus, Stigimoloch, Dracorex and Sphaerotholus. Some, including (Horner,) have suggested that only one of these, Pachycephalosaurus, is valid. The armor-plated dinosaurs are represented by at least two genera; Ankylosaurus (an ankylosaurid) and Denversaurus, (a nodosaurid) though this material is surprisingly rare. Tyrannosaurs are represented by the super predator, Tyrannosaurus and the always controversial, Nanotyrannus. Struthiomimus appears to be the lone Ornithimimid, but the Oviraptorosaurs may include up to three separate genera. These include the recently described Anzu, the enigmatic Leptorhyncos, and two, smaller undescribed specimens. Dromaeosaurs are represented by at least two and possibly up to five genera. These include the recently named Acheroraptor and Dakotaraptor as well as cf. Saurornitholestes, Richardoestesia and another undescribed genera known only from teeth. Troodontids include two genera known only from teeth and very rare, isolated elements. These include: cf. Troodon and Pectinodon. Additional enigmatic small theropods known from either fragmentary material or teeth include: an undescribed Alvarezsaurid and Paronychodon (which may or may not be a dinosaur). Of all of these genera, only ten remain undisputed and known from reasonably complete skeletons. These include: Triceratops, Edmontosaurus, Thescelosaurus, Pachycephalosaurus, Ankylosaurus, Denversaurus, Tyrannosaurus, Struthiomimus, Dakotaraptor and Anzu. Triceratops, Edmontosaurus, Thescelosaurus, Pachycephalosaurus, Ankylosaurus, Denversaurus, Tyrannosaurus, Struthiomimus, Dakotaraptor and Anzu. The rest are known from very fragmentary remains, teeth, or are disputed for one reason or another.

Other time equivalent formations include the Frenchman and Scollard Formations of Canada, the Laramie and Ferris Formations of southern Wyoming, the Denver Formation of Colorado, and the McRae Formation of New Mexico. Together, this entire group of rock formations outcrop sporadically over 1,200 miles along the front range of the Rockies and along the outer rims of the inter-montane basins of the western United States and Canada. For the purpose of this study, only the Hell Creek and Lance Formations of Wyoming, Montana, South Dakota and North Dakota are considered. Fossils contained in these beds represent some of the last dinosaurs to exist on the planet prior to the great K-Pg mass extinction.