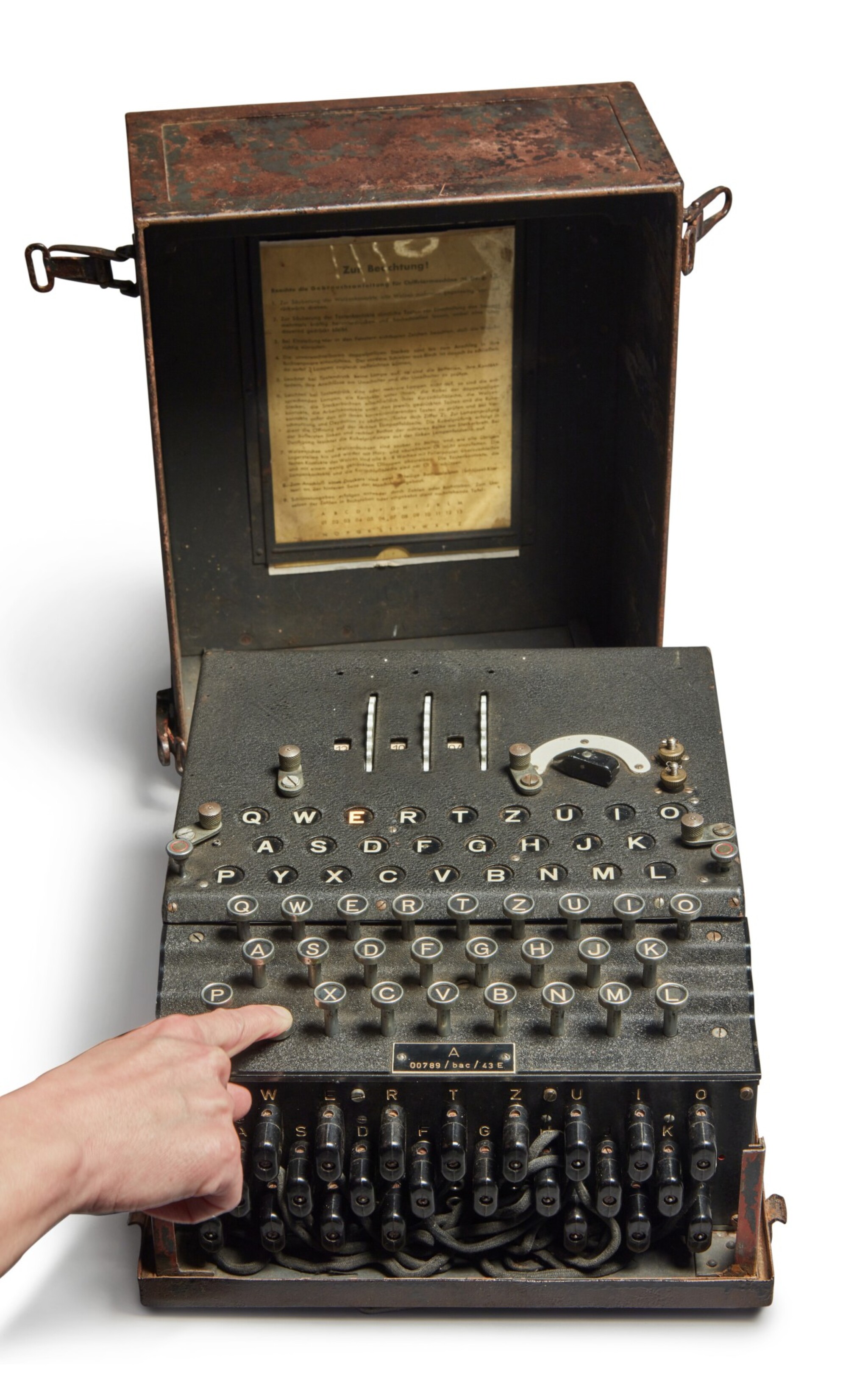 3-rotor Enigma I cipher machine, serial number A00789/bac/43E, complete with reflector and 3 bakelite rotors (I, II, and IV) all with matching serial numbers (A00789), each rotor with 26 positions labeled with numbers, housed in the original black metal Panzerholz case (10 1/2 x 13 1/4 x 6 inches). Case with removable metal lid, revealing control panel with standard raised "QWERTZ" keyboard of 26 glass and metal keys with white on black backgrounds, light panel with letters A-Z and hinged rotor cover lifting to reveal 26 light bulbs, reflector & rotor compartment, and battery compartment, bake-lite Steckerbrett (plug-board) and 12 patch-cables, inside of lid with original printed instructions ("Zur Beachtung!"), and original wooden extra bulb holder. Some wear to components consistent with, and indicative of field use including: lettering on ring above power switch worn off, rotor cover no longer present, green contrast screen no longer present (not uncommon; the original screens are made of a material that off-gases and is highly corrosive to the machines), removable metal plate in front of plugboard no longer present, lettering outside of case which would have read "Chiffriermaschinen" worn away, Despite this, this machine is in exceptional working condition, with all original parts and fully operational.

A FULLY OPERATIONAL ENIGMA I, IN ORIGINAL CONDITION, IN A RARE PANZERHOLZ CASE.

The Enigma I, often called the "Heeres" Enigma, was used by the German Heer (Army), the Luftwaffe (Air Force), and later, by the Kriegsmarine (Navy) before the introduction of the "M4" 4-rotor machine. The serial number A00789/bac/43E of the present machine indicates that it was manufactured in 1941 by Ertel Werke, a German company manufacturer of scientific and mechanical instruments founded in 1802. Ertel-Werke was located in Munich’s Westend from 1911 on, until it was burned down completely in a bomb attack in April of 1944. It was the exclusive manufacturer of the Enigmas in the rare metal Panzerholz cases.

Patented in 1918 by Arthur Scherbius, the Enigma machine uses three electromechanical cipher wheels, each with 26 contacts at either side. The three rotors would be placed in pre-arranged positions, and the user would then type in a plain text message using the keyboard. The machine would encipher the message, and each corresponding encoded letter would light up on the light panel. The enciphered message would then be sent to the receiving party, usually via Morse code. The receiving party would then decipher the message, using another Enigma machine with the rotors set to the same position as the first. The rotors of all Enigmas were interchangeable, and indeed, rotors were swapped out very frequently. The fact that all three rotors on this machine match each other, and match the machine’s chassis indicate that this machine was used in isolation from any others.

The Enigma machine set a challenge that was answered by the remarkable team at Bletchley Park, whose achievements provide one of the most compelling stories of World War II. Breaking Enigma was the work of many, including Polish cryptographers who had already begun to decipher Enigma traffic before the war; naval forces who risked their lives capturing Enigma machines and code books; Alan Turing and other mathematicians with their revolutionary models for deciphering; Tommy Flowers and other mechanical geniuses who designed 'Colossus', the world's first programmable digital computer, at the GPO Research Centre at Dollis Hill in north west London; the hundreds of Wrens who operated the Bombes and, later, Colossus machines that made possible the daily decrypts. Their work saved countless lives and had an enormous impact on the submarine war in the Atlantic, the North African campaign, and the Normandy invasion; the work of Bletchley Park is often said to have shortened the war by two years. Furthermore, by coming to the understanding that to defeat Enigma it was necessary to mechanize much of the work of decryption, they helped to inaugurate the computer age.