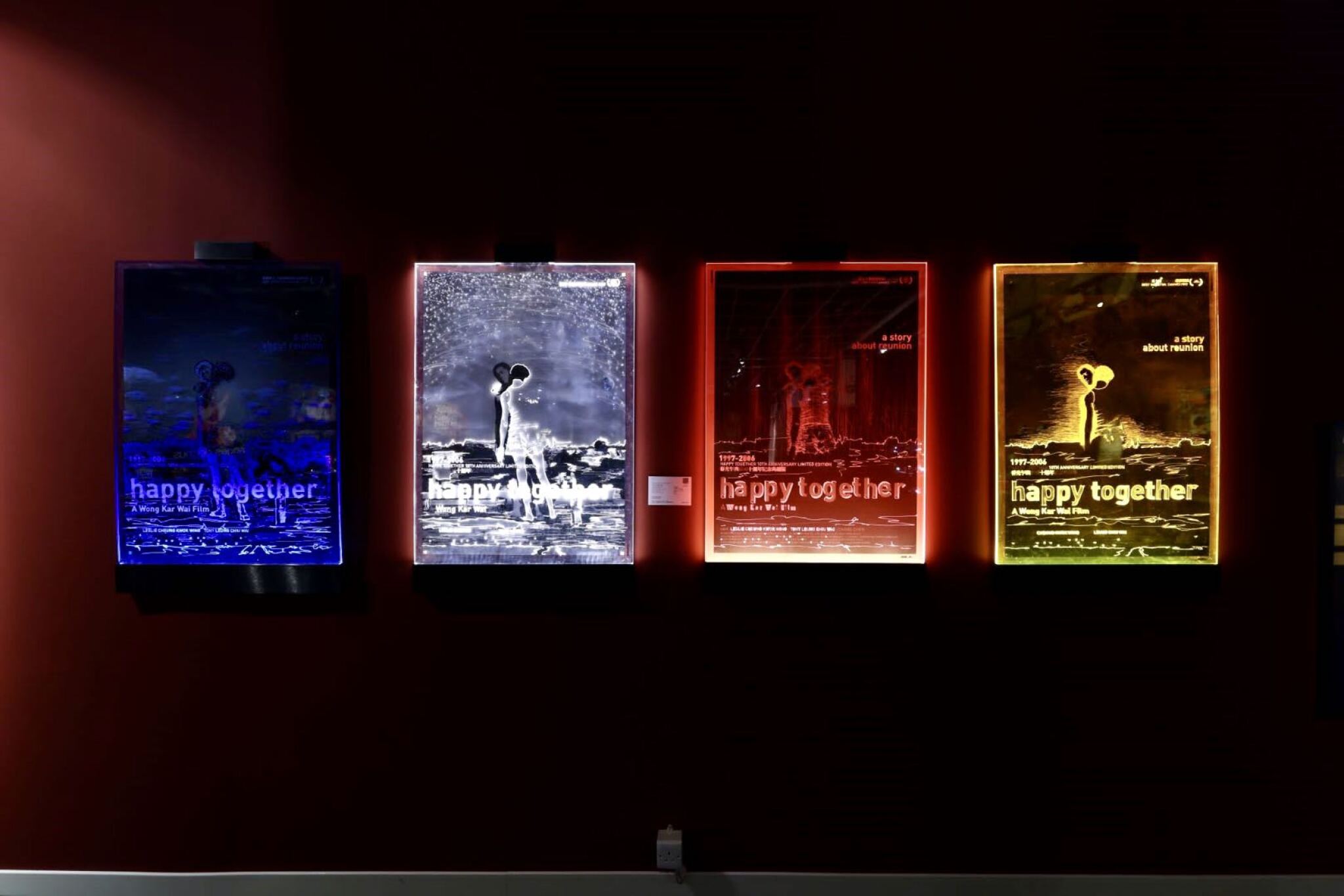 b. signed in Chinese

"The poster of HAPPY TOGETHER was printed with traditional offset printing technique, which broke down color printing into cyan, magenta, yellow, and key (black). Because of my background in graphic design, I have always taken a keen interest in the design and printing of our posters. Over the years, I have collected different devices used in the printing process, such as movable types, printing plates and output films.

Happy Together Diptych is my first collaboration with Tino Kwan, who is not only the leading lighting designer in Hong Kong today, but also my senior at the Polytechnic University. This installation projects the original output films in the traditional split of CMYK, but from the perspective of Tino’s modern lighting approach, multiplying the original visuals across a spectrum of colors, mediums and time."

Happy Together Diptych is a crossover between Wong Kar Wai and world-renowned lighting designer Tino Kwan. The artwork is created with the poster output films of HAPPY TOGETHER.

The set of four black and transparent output films were originally created for the traditional four-colour printing process of Cyan, Magenta, Yellow and Black. To create this installation, Kwan fitted the output films between custom-built acrylic sheets and installed edge lighting within the frames of this work. The acrylic sheets were ink drawn and hand engraved by Kwan himself. The work is an interpretation of the classic visuals of HAPPY TOGETHER with Kwan's signature lighting across colours and mediums.

Internationally acclaimed lighting designer Tino Kwan is regarded as one of the world’s most celebrated masters. His glazing work can be found in landscapes across the globe, from nano-homes, commercial buildings, pleasure yachts, royal palaces, to the most luxurious casinos, hotels and private homes. Over the past 40 years, he has accumulated numerous accolades from all over the world, including the Lifetime Achievement Award from the Hong Kong Interior Design Association (HKIDA).

Born and raised in Hong Kong, Kwan studied at the Hong Kong Polytechnic University, with a major in the industrial and environmental design. Upon graduation in 1973, he worked in an interior and furniture design company, before pursuing a position as a lighting designer.

Kwan founded TinoKwan Lighting Consultants in London in 1979, and moved his office back to Hong Kong in 1982. Kwan opened his branch offices in Beijing and Tokyo in 2010 and now has a total of over 60 staff.

Today, Kwan expands his design practice and serves as an influential figure in the lighting industry. Kwan has taught at design institutes in Hong Kong and the Tsinghua University in Beijing since 2008. Kwan also serves as the president of the Asia Pacific Hotels Design Association, a platform for international hotel designers and hotel industry.