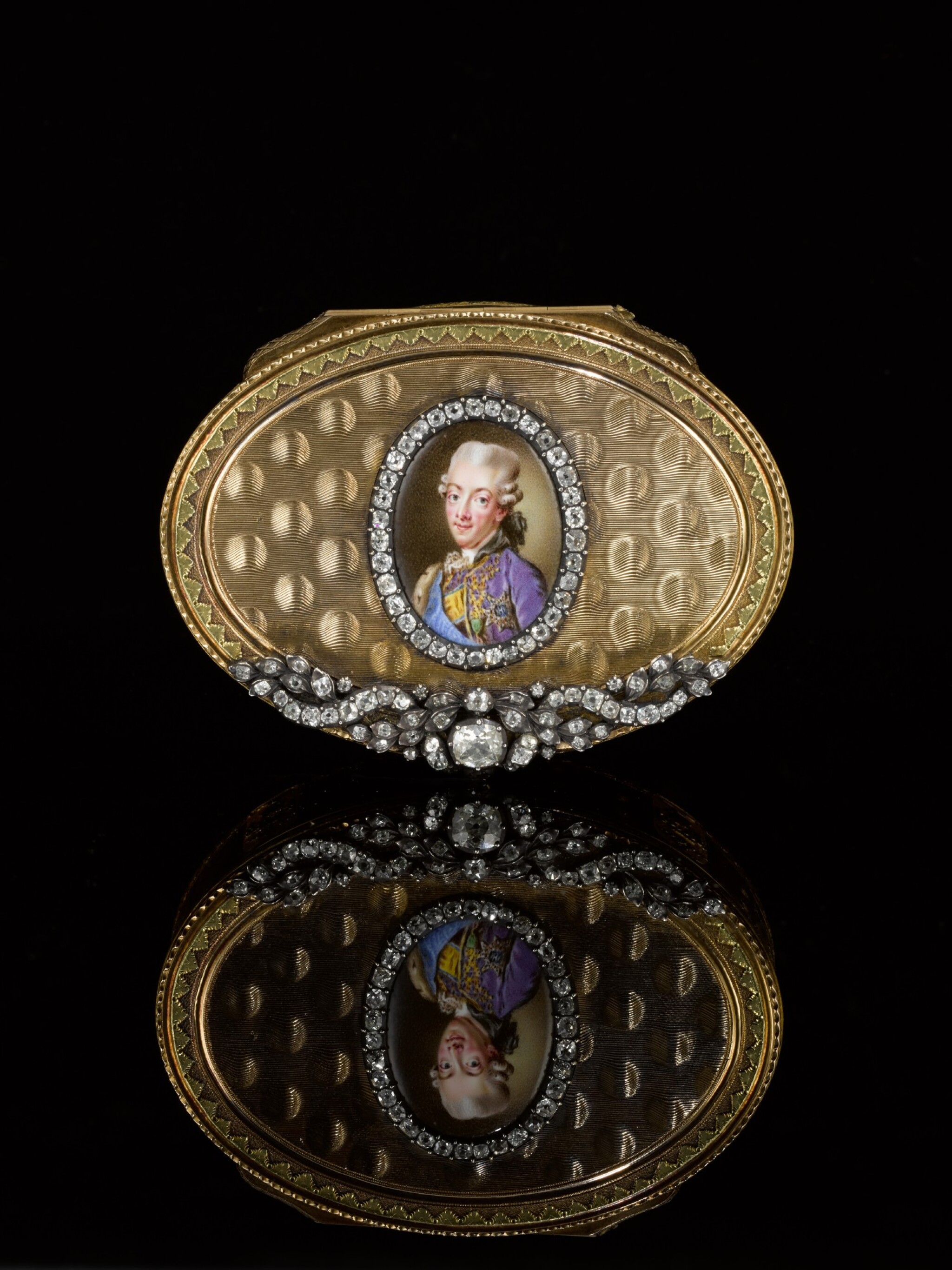 of oval form, the lid inset with a rose-cut diamond-framed enamel miniature of King Gustavus III of Sweden, attributed to Georg Henrichsen, on a reeded engine-turned ground forming a regular circle pattern, within a chased lemon-gold acanthus border, the sides also chased with four cartouches with urns below scrolls on a sablé ground, the richly-jewelled thumbpiece formed of interlaced ribbons of cushion-cut diamonds, rubbed maker's mark between leafy sprigs, in a later green leather case,

The first recipient of the box was the Scottish Jacobite and Freemason John Mackenzie, 4th Lord MacLeod (fig. 2), who was born in Castle Leod, Scotland, in 1727 as the eldest of twelve children to George Mackenzie, third earl of Cromarty (c. 1703–1766), and Isabella Gordon (1704/5–1769), daughter of Sir William Gordon of Invergordon. After joining the rebel army, Mackenzie fought in the Battle of Falkirk and led a regiment of 500 clansmen in the Jacobite rising of 1745. During the rebellion, Mackenzie was taken prisoner, but in January 1748, he received a full pardon on the condition of giving up his earldom. Mackenzie left Scotland in 1750 and lived in Berlin, from where he prepared to join the Swedish Army in 1750, soon entering service in Swedish Pomerania as a mercenary. He served the Swedish crown for twenty-seven years with distinction, and became a lieutenant general and recipient of the Order of the Sword of Sweden, an order of chivalry created by King Frederick I of Sweden in 1748. After fighting as a volunteer for the Prussian army in the Seven Years' War (1756-1763), John Mackenzie was created a Count of Sweden and returned to Scotland in 1771. His Swedish title was recognised by King George III in 1778. It is probable that the 4th Lord McLeod received the present box as a token of gratitude for his services to the Swedish crown before 1779, when he left for Madras as part of the East Indies Campaign in 1779. He returned to Scotland again a year later and died in Ross-shire in 1779.