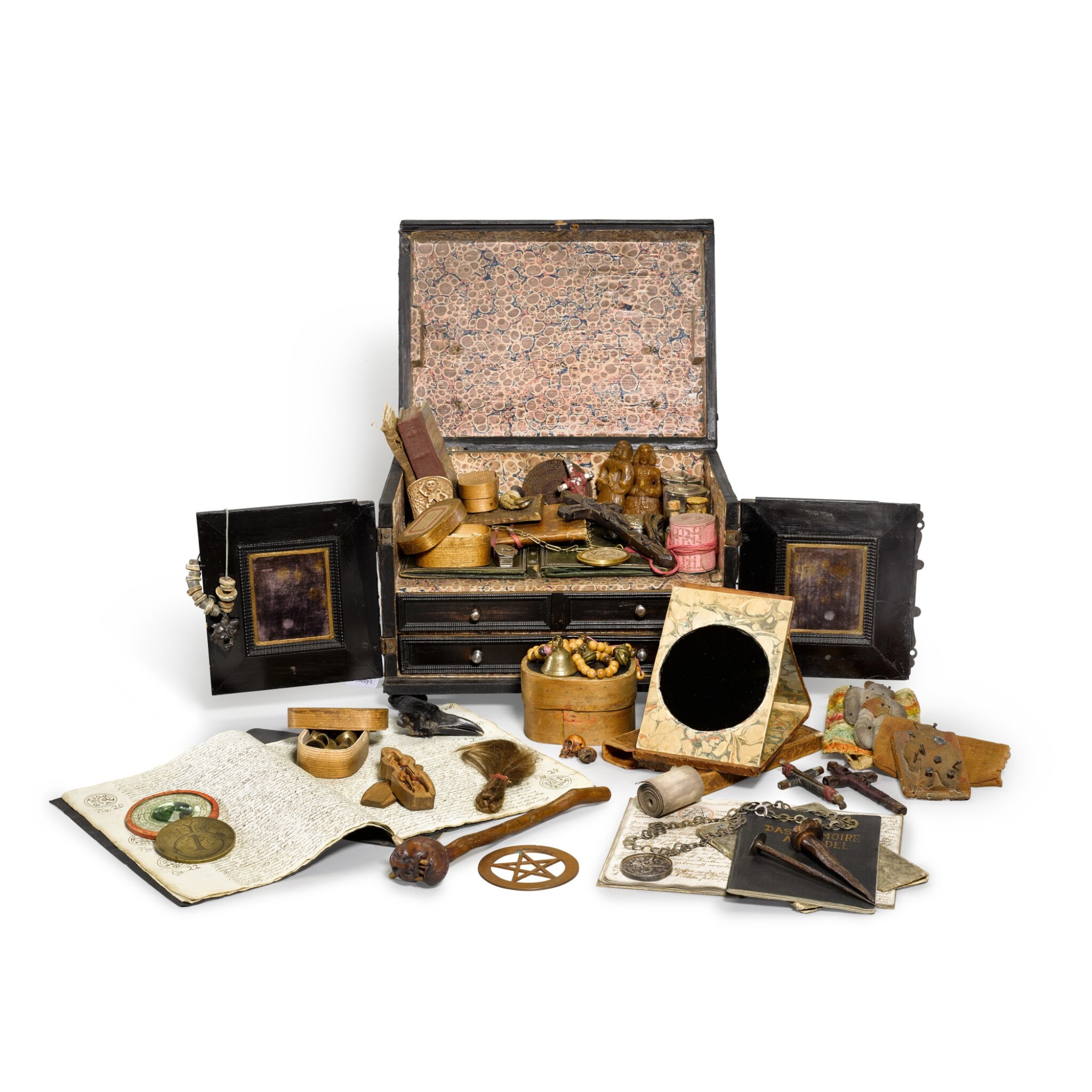 An extraordinary assemblage of objects pertaining to the occult and witchcraft

the collection including pamphlets, talismans, amulets and other occult objects contained in a casket with a hinged lid and doors opening to reveal a marbled paper interior with two short drawers

A small cross with twine and hammered nails

A preserved crows head with beak

A small silver pendant in the form of a key

A silver-metal pendant and chain, the pendant cast with a dragon and verso engraved with a star motif and the word SATAN

A brass hat-pin, with cherub and heart finial

A small handstitched cloth ‘Voodoo’ doll, with hair and pins, in silk bag

A small handstitched cloth ‘Voodoo’ doll, fixed to a board, with nails and pins, in linen bag

A carved wax ‘Voodoo’ doll with tacks and pins, in parchment bag

A plaster/composite cast of a Gothic style wax seal

A carved wood Christo Morto, with brass fixing for hanging

A cut length of plaited hair

Part of a metal button

A gilt-bronze mount in the form of a gargoyle

A moulded wax plaque of the Virgin & Christ child

A miniature Venetian glass goblet, from a dolls house

A bracelet of chord threaded with bones and metal mask pendant

An Asian fragment of bone carved with a skeleton

An engraved brass pendant with hanging loop and serrated border

A cast metal pendant depicting a Saint, with hanging loop

A small brass oval pendant from a rosary

A brass cast pendant in the form of the Virgin and Christ Child, with matrix engraved ‘ID’

A cast-bronze cross on stand

A silver-metal hinged snuff box containing a smooth pebble, the lid with armorial

A silver-metal glazed pendant and chain containing a paper fragment with manuscript diagram and text, the border of the pendant in the form of an ouroboros

A brass disc engraved with an ouroboros and tree, with integral pendant loop

A rosary of turned wood beads and metal bells

A bentwood box, with papered label to the lid inked ‘Geheime Sachen’

Another bentwood box, with inked paper label to the lid

A bentwood box containing a collection of animal teeth

A fragment of vellum with manuscript text and symbols

A set of eight miniature brass bells with glass clappers

A silver-metal conjoined double cannister, each lid with a cruciform finial

Gallery inspection recommended. Whilst this group of objects is fascinating, the onus is fun and decorative rather than academic. The casket appears principally 17th century albeit with a re-lined interior and the case has undergone some remedial attention. The doors are slightly uneven. The casket outer surface has wear and some re-decoration, the surface also appears to be later blackened. It is possible that the attractive marbled paper to the interior is later. Some metalwork mounts, hinges and knopped handles to drawers later. Many of the objects are of an aged appearance and show signs of extensive wear and use and in some cases are fragmentary. The objects probably assembled/curated in the 20th century, many of these components are 19th century and some earlier – some are also more recent. The watch movement has not been tested. A most unusual lot.

This lot contains endangered species. Sotheby’s recommends that buyers check with their own government regarding any importation requirements prior to placing a bid. For example, US regulations restrict or prohibit the import of certain items to protect wildlife conservation. Please note that Sotheby’s will not assist buyers with the shipment of this lot to the US. A buyer’s inability to export or import these lots cannot justify a delay in payment or sale cancellation.