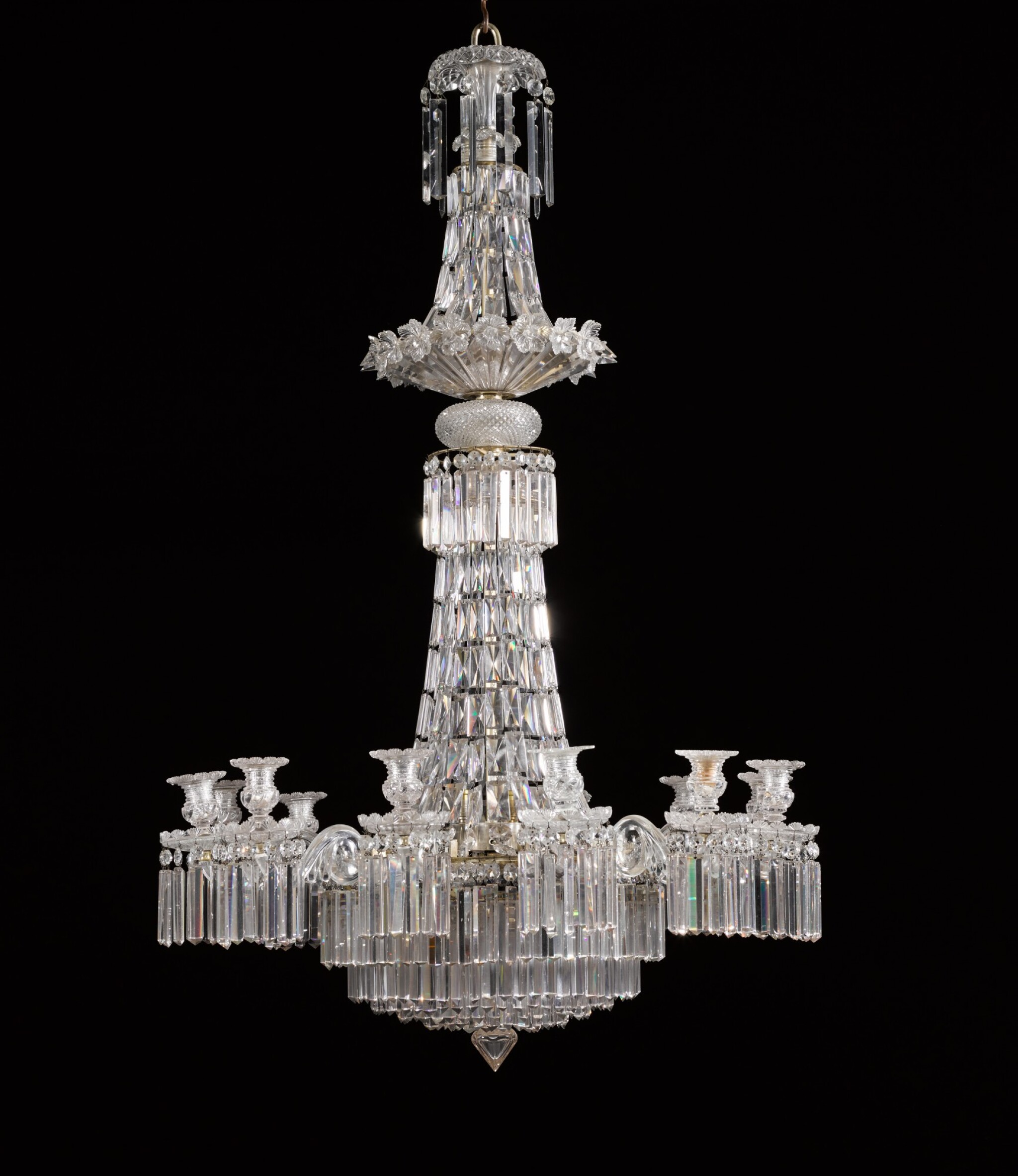 late 19th/early 20th century, in the manner of Perry & Co

the upper section with cross-hatched bowl issuing a curtain of faceted drops above a tier of glass flowers and a cross-hatched ball above further drops and festoons, with fourteen cut-glass nozzles on scrolled glass supports, the drip-pans with cascades of drops, the main shaft with a tapering cascade of drops ending in a cut-glass knop

A grand chandelier in overall reasonable conserved condition entirely consistent with age. One arm with restored break. Typical minor chips and losses to cut-glass elements throughout and one nozzle with break to edge that will require attention. Some elements possibly replaced including drip pans which have been drilled for electricity and generally the chandelier will require installation by a professional. One or two missing elements including one two flower heads and various faceted drips to tiers beneath five of which are present and will need refixing. An impressive design and of superior quality that will clean up nicely and benefit from further conservation.

The present lot is probably by Perry & Co. The boldly-cut lustres, scrolled glass branches, applied ‘flower-heads’ and in particular the vertical disc-form arrangement of glass ‘bars’ to a stage of the stem suggest these eminent English makers. The firm were renowned not only for their stunning creations but illustrious client list too. The present lot relates to examples in the collection at Chatsworth which were acquired by the 6th Duke of Devonshire for his London residence Devonshire House in the 1840s, notably for the Green Drawing Room and grand Salon. It is likely the firm also supplied a glass handrail, newel post and scrolled wall lights for the fabled ‘crystal staircase’ at the Mansion. The present lot appears though, to be from later in the firms output.

This leading manufacturer of chandeliers was founded in 1756 by William Parker, later becoming Parker & Perry before finally changing their name to Perry & Co., until closure of the business in 1935. The company provided fittings for Royal residences such as Carlton House and the Royal Pavilion, Brighton. Perry went onto re-work all the Carlton House chandeliers for Buckingham Palace. One of the most important series of chandeliers the company produced was for Goldsmith's Hall. George Perry in his letter accompanying the estimates to the livery company wrote ‘...we trust that our having made the greater part of the lustres for the late King, and our now being employed in making the those for the new Palace of his present majesty [William IV), will be some guarantee for the new character of our manufacture.’