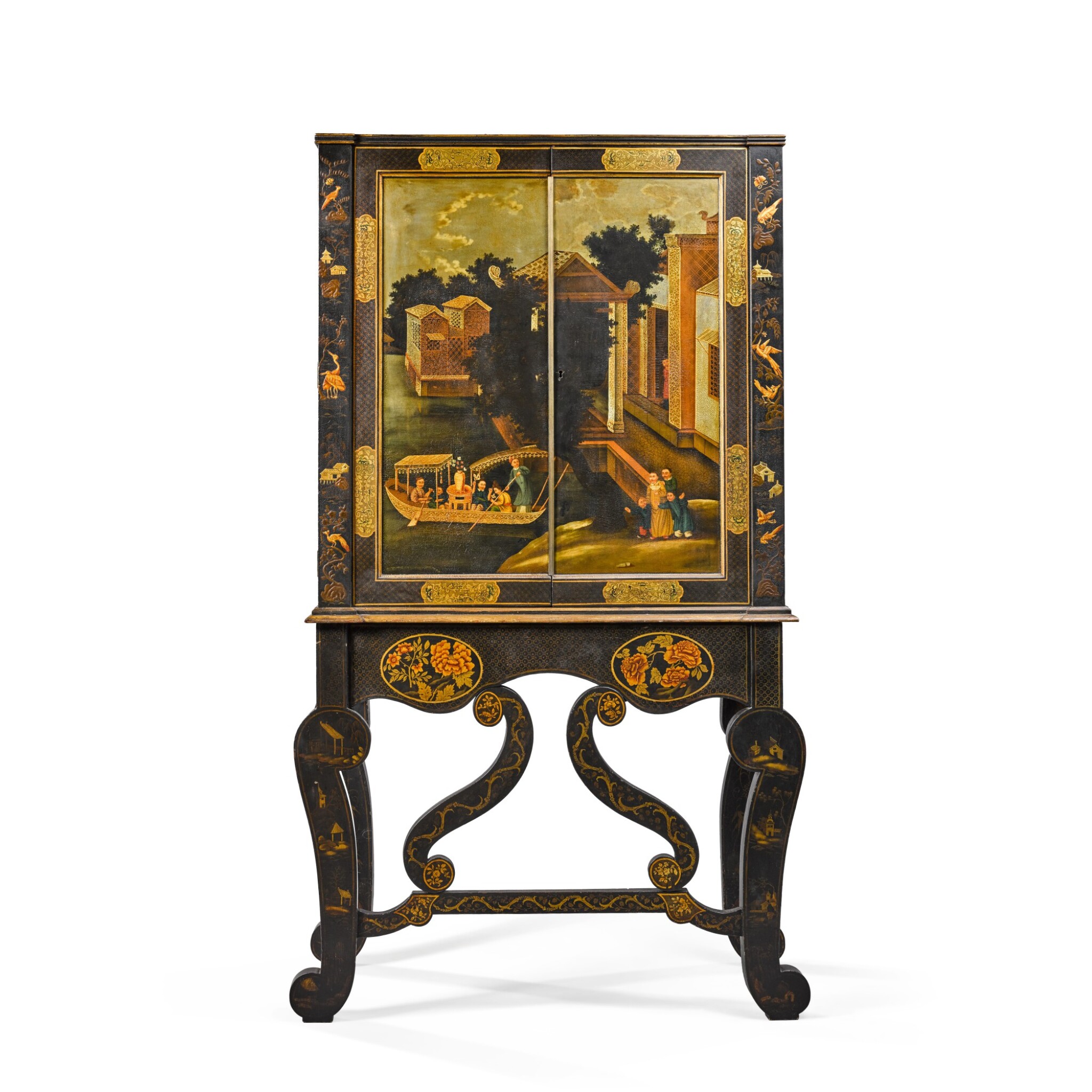 circa 1820, in the manner of Frederick Crace

the upper section with two cupboard doors decorated with a landscape, opening to reveal a fitted interior with fourteen drawers around a central niche with doors opening to further drawers, raised on a stand with four scrolling legs joined by a stretcher to the front

In overall very good conserved condition and ready to place. With some minor retouching to the painted decoration. The sides with gilt decoration slightly faded. The interior retaining its vivid colours. Generally with minor old marks, wear and scratches consistent with age and use. Feet of stand restored. One key. A very attractive and decorative piece. Structurally sound.

This lot should have no VAT symbol. The item will be sold under the auctioneer’s margin scheme and VAT will not be charged on the hammer price.
The Hon. Carolina Boyle (d. 1883), maid-of-honour to Queen Adelaide;
Bequeathed to her solicitor, Luke Coleman;
His daughter, Florence Knibb;
Thence by descent until acquired by the present owner.

The present cabinet has affinities with the work of John and Frederick Crace, whose commissions included work for the Prince Regent at Brighton Pavilion between 1800 and 1804, where they designed interiors in the Chinese style.

Their accounts for this period show that the from the start the Craces were involved in much more than merely the applied decoration at Brighton. Not only did they amuse the Prince with a variety of Chinese curiosities, including costumes, ivory junks, and even `seven pounds' of Chinese tobacco', but large quantities of furniture were supplied by them too. Most of it seems to have been either Chinese - especially bamboo furniture - or English in the Chinese manner. In 1802 `One very Fine Japan India Cabinet...£14' was invoiced, the following year five more, one costing £15, and in 1804 a charge was made for japanning a stand for a cabinet in black and gilt (see Megan Aldrich (Ed.), The Craces Royal Decorators, 1768-1899, 1989, pp. 21-26).

It has been suggested that the present cabinet might have been a wedding gift from Queen Adelaide, the wife of William IV, to her maid of honour Carolina Boyle.