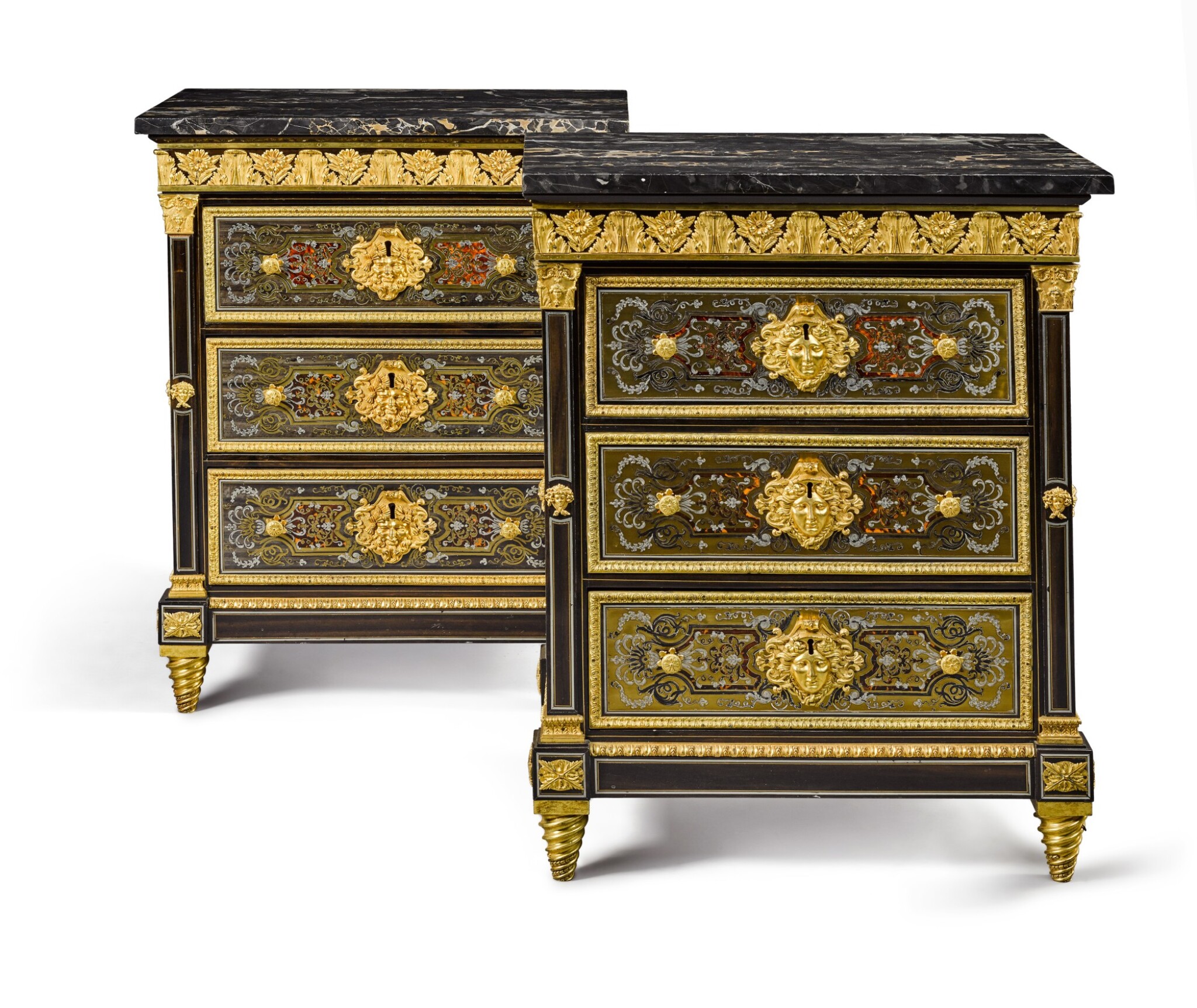 the portoro marble top above a frieze of acanthus leaves and flowers, on three drawers raised on turned toupie feet, both with spurious stamp for B. MOLITOR, alterations

This lot contains endangered species. Sotheby's recommends that buyers check with their own government regarding any importation requirements prior to placing a bid. Please note that Sotheby's will not assist buyers with the shipment of this lot to the US. Please note that CITES licences are required for the export of any restricted species from the UK, including to EU countries. A buyer's inability to export or import these lots cannot justify a delay in payment or sale cancellation.
Christie's, Paris, Un hôtel particulier à Genève. Architecture et décor par François-Joseph Graf, 27 November 2019, lot 4;
where acquired by the current owner.

This pair of meubles d’appui embodies the passion for Boulle marquetry which has never faded among collectors as well as the flawless skills of 19th century ébénistes in emulating the celebrated technique.

The present side cabinets seem to take inspiration from a pair of commodes dated circa 1715 from Boulle's workshop, both sold in Paris in December 1768 (lots 155 and 156, illustrated in André-Charles Boulle, Paris, 2009, pp. 230-231). Interestingly, these cabinets also bear resemblances with the work of Etienne Levasseur (1721-1798) from the late 18th century who himself was inspired by André-Charles Boulle. In particular, the general shape of these cabinets and the mounts are found on examples either signed or attributed to Levasseur: one sold Sotheby’s New York, 21 May 1992, lot 106; another Sotheby’s, Paris, 17 December 2002, lot 89 and one at Christie’s, London, 12 December 2002, lot 23.

The Boulle marquetry technique has been admired for more than three centuries and remains an undisputed essence of the French style desired by Louis XIV and it has become inseparable from the name of André-Charles Boulle. A famous cabinetmaker of Louis XIV, living in the Louvre from 1672, Boulle is credited for the technique which consists of assembling thin sheets of different materials - usually copper and tortoiseshell, but also brass, pewter or horn. Using a marquetry saw, these sheets are layered and the patterns cut out. In the end, the cabinetmaker obtains as many patterns and backgrounds as there are stacked sheets. He painstakingly reconstructs the designs using the different textures. The first marquetry obtained, known as the première partie, is usually metal on a tortoiseshell background, while the second, has a tortoiseshell pattern on a metallic background: this is the contre partie. Combining technical skill with an acute aesthetic sense, André-Charles Boulle developed an opulent decorative vocabulary, able to satisfy the expectations of a demanding monarch and aristocracy.

The designs of Boulle’s inventions were influenced by his neighbour at the Louvre, Jean I Bérain (1640-1711) but also by the French designer Daniel Marot (1661–1752). Grotesques ornaments and stylised foliage thus became the decorative hallmarks of Boulle marquetry furniture pieces. Boulle's success was significant, and countless followers embraced the French cabinetmaker's style throughout Europe. Until the Revolution, the demand was high. The French Revolution at the end of the 18th century worked in favour of the British, to whom a large part of the Boulle furniture confiscated from French collectors was sold. The craze across the Channel for this type of marquetry was at its peak between 1815 and 1825. As soon as the English interest in Boulle marquetry faded a little in the first half of the 19th century that the furniture styles under Napoléon III wanted nothing more than Boulle marquetry.

The motivation for making such high quality copies was due to the dispersal of the French Royal collections during and after the French revolution in 1789. Despite the overthrow of the monarchy, within a generation their furniture and lifestyle soon became highly admired and copied. The inspiration thus was there to remake such furniture and all that was needed was the opportunity to examine it with a trained eye. The 19th century was appropriately rich with sales of important collections of works of art both in France and England that included Boulle marquetry examples from the 17th and 18th centuries.