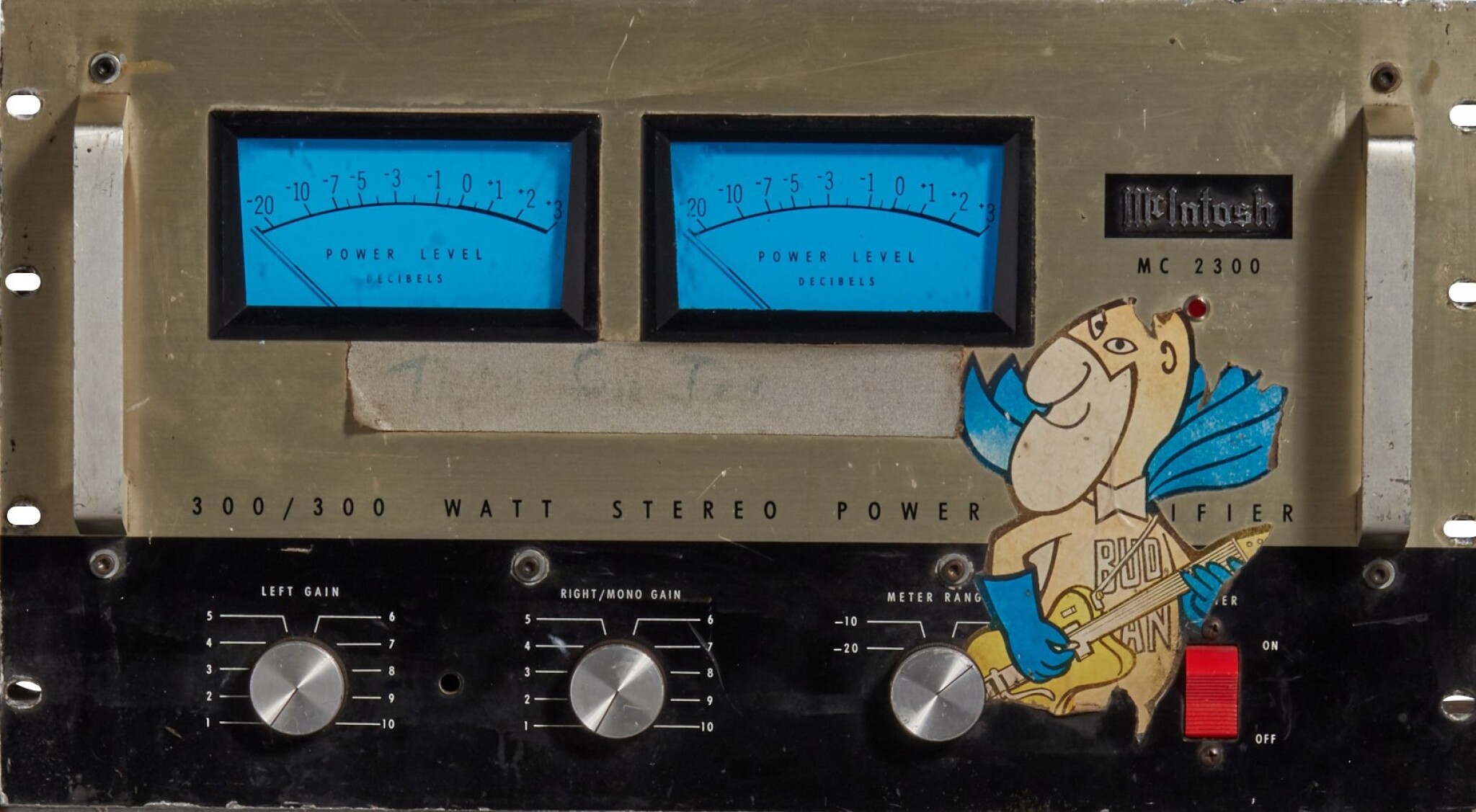 "Big" Steve Parish: “Jerry played through Fender Twins and they were loud, but everyone always wanted to be louder for the big gig, especially outdoors. Dan Healy figured out how to take a line out from Jerry’s guitar amp, first into a McIntosh 350 tube amp during the early Wall of Sound set up. When the 2300 power amp came out we bought 70 of them, and put them throughout the system, but this is the one that Jerry liked the best and he played through it for years. It really made that Twin sound huge and became part of his signature tone at the time. At some point, Ram Rod stuck that Budweiser Budman sticker on it one day and it’s instantly recognizable as Jerry’s.”

Budman was essential to Garcia’s sound and became an icon in and of itself. The Grateful Dead’s commitment to playing live with the best sound possible led them to using audiophile, rather than commercial, sound equipment. The legendary build quality and low distortion of McIntosh fulfilled both the sonic and roadworthy requirements. An afternoon at the legendary Watkins Glen concert further influenced their concert set up, helping pave the way for the Wall of Sound. Janet Furman, amp technician for the Dead, remembered:

“One memorable tour in July, 1973, included a stop at the Watkins Glen Jam, held at the famed auto raceway. This all day outdoor concert featured just three super groups – the Grateful Dead, the Band, and the Allman Brothers. But that bill was enough to attract the largest crowd in rock history, if not in all of American history – 600,000, easily topping Woodstock’s smaller but better remembered crowd of 300,000. The Dead would need a massive amount of amplification to reach all those people. At the time, they insisted on using only McIntosh 2300 power amps, an audiophile rather than pro audio product, made in small quantity and hard to find on short notice. The McIntosh factory happened to be near Watkins Glen, in Binghamton in upstate New York. We were already backstage at the concert, and every road in the area was clogged with concert traffic. My assignment was to get five more of those giant amps, any way I could. Sam Cutler, the former Rolling Stones road manager now working for the Grateful Dead, handed me $6000 in cash and the use of a helicopter and pilot. Though it was a weekend and the McIntosh factory was closed, I tracked down the owner at his home. The pilot flew me from the venue to downtown Binghamton. Helicopter landings there were not an everyday affair, and there was great media interest. Flashbulbs popped and reporters stuck microphones in my face. In the summer heat, I was wearing only shorts and a concert T-shirt, with the cash wadded up in my pocket. I met up with the owner, who drove me to the factory and sold me the amps off the production floor. We drove back to town in his station wagon, his wife and kids aboard on their way to a summer vacation, and transferred the amps into the copter. At over 100 lbs each plus two people, it was a heavy load for a small helicopter. We had a very scary moment as we took off, coming within inches of crashing into a highrise building. But back at Watkins Glen, the sight of that enormous crowd from the air was unforgettable. In the moment I landed, delivering the goods, I became an instant hero.”