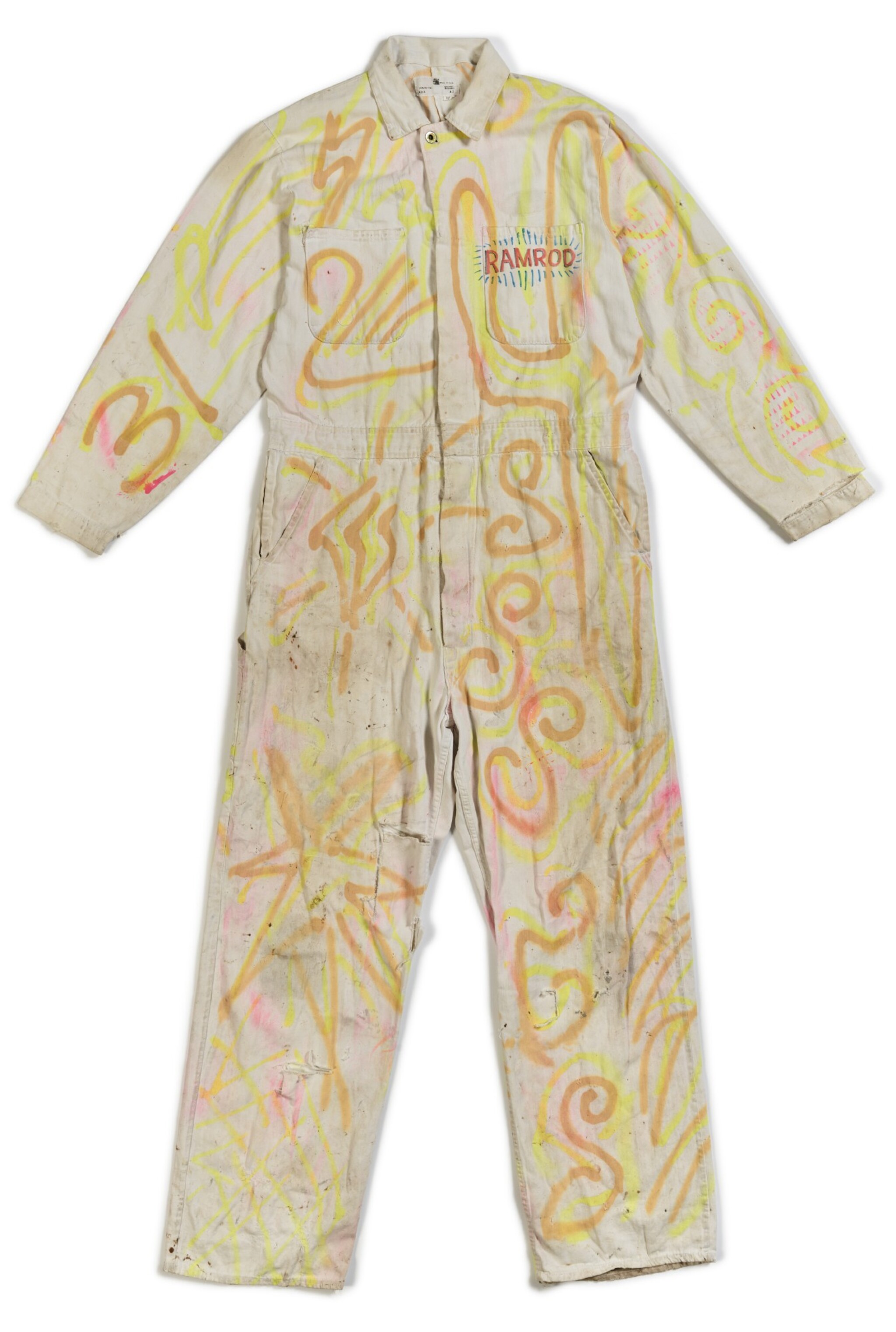 White cotton coveralls (size 42 long). Embellished by hand with orange, yellow, and pink Day Glo paint, “Ram Rod” written in red and blue on the proper left front pocket, “road” written in orange dayglow on back right leg; moderate to heavy wear consistent with frequent use, apparent mud stains along jumpsuit legs, with numerous tears (particularly to the right leg and left arm), repairs, and holes, evidence of an oval tag removed from left breast pocket, perhaps an old gas station tag (Shurtliff once owned a gas station). Despite, or even because of, this wear, an evocative relic of an important and ephemeral cultural moment.

The birth of modern American counterculture

The history of the Grateful Dead is wrapped up with Ken Kesey’s Acid Tests — the late-1960s weekly multimedia party advocating for psychedelic exploration through LSD. From the first Acid Test in November of 1965, several band members either played under their proto-Dead name the Warlocks, or were at least in attendance and played around with some of the instruments on hand. Regardless of this vaguary, they indeed played the subsequent December 4th Acid Test, their first performance as The Grateful Dead.

Prior to joining the Grateful Dead as their crew chief in 1967, Lawrence Shurtliff was an integral part of Ken Kesey’s roving band of psychedelic explorers, the Merry Pranksters. In fact, it was through his association with Kesey’s crew that he earned his nickname Ram Rod. Faced with the task of fitting seven people into a VW Bug on their travels through Mexico, Kesey appealed to the group for help, prompting Shurtliff to respond “I am Ramon Rodriguez Rodriguez, famous Mexican guide.” Ramon Rodriguez Rodriguez collapsed into Ram Rod, and the nickname stuck. His introduction to the band, as told by Mickey Hart, was at Kesey’s prompting: "I remember when he first showed up at 710 Ashbury. He pulled up on a Harley. He was wearing a chain with a lock around his waist. He said: 'Name's Ram Rod. Kesey sent me. I hear you need a good man.’”

These coveralls are decorated by hand with the Day Glo paint that was heavily used in Kesey’s circle, often seen embellishing the military and utilitarian clothing co-opted by the scene. “Road” is scrawled in orange paint across the back left leg, a seeming reference to Ram Rod’s status as a dependable road warrior, on the Merry Pranksters school bus, or on tour with the band.

Given the ephemeral nature of the counter-culture movement, the present garment is a wonderful relic of an influential movement in modern American history. “The Tests became a platform for a freshly psychedelicized arts underground up and down the coast, uniting decades of evolving California spiritual and lifestyle experimentation into a veritable blueprint” (Heads, p. 12).

Please note this jumpsuit is likely later than initially described, after the 1960s.