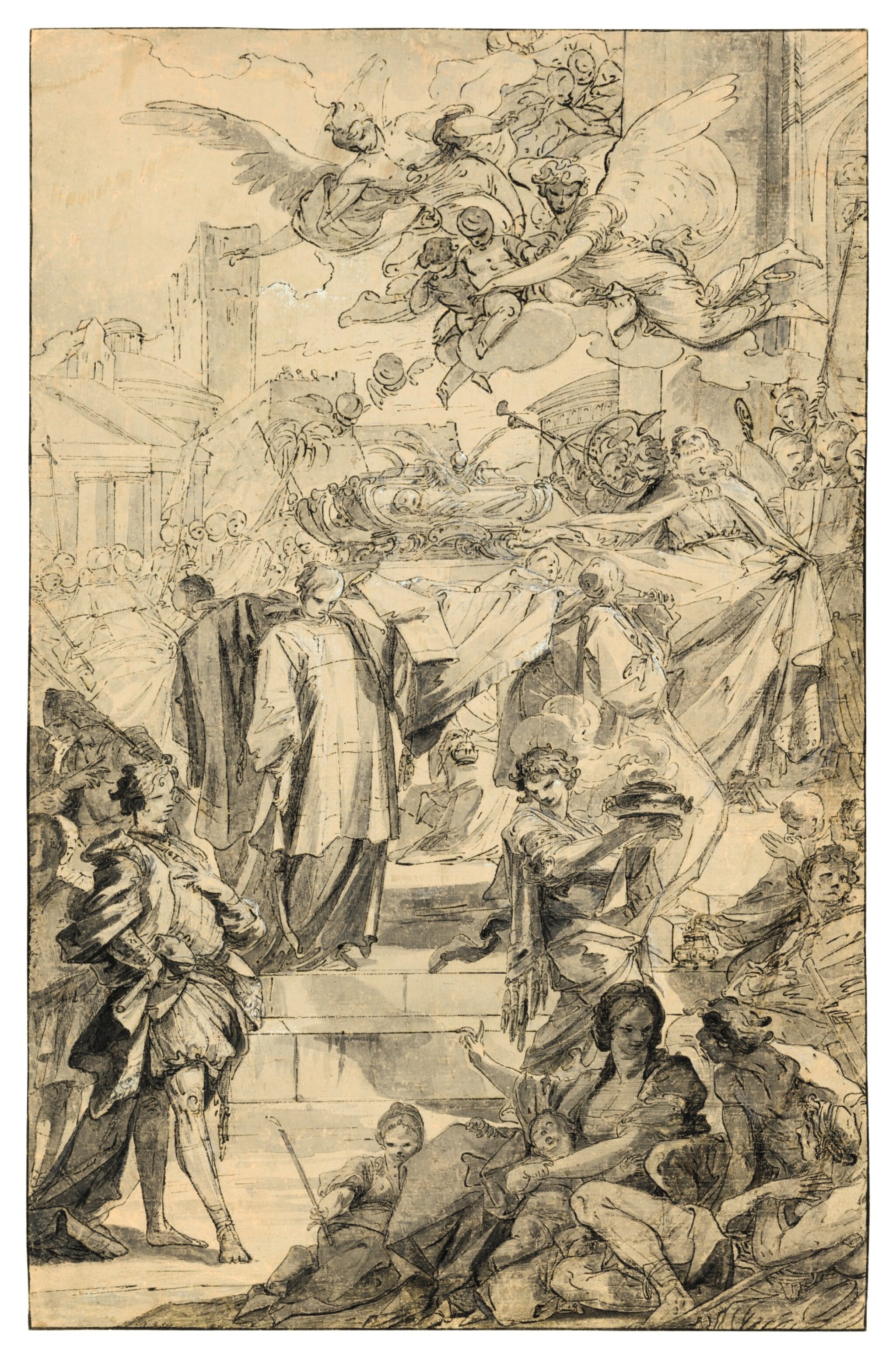 This handsome, large drawing, a rare and important example of Giaquinto's graphic style, was first identified by Anthony Clark as a finished compositional study for a major work by the artist: The Translation of the relics of Saint Acutius and Saint Eutyches from Pozzuoli to Naples. This ambitious painting, commissioned by the Cardinal Archbishop of Naples Giuseppe Spinelli (1694-1763) and executed for the left-hand tribune wall in the Duomo of Naples, was painted circa 1744-1745 in Rome, when Giaquinto had just completed the impressive cycle that Pope Benedict XIV, Lambertini (1740-1758), commissioned from him, for the Basilica of Santa Croce in Gerusalemme.

Such a grand compositional study is a rare survival, providing, as Irene Cioffi observed, important insights into the artist’s working methods (see Exhibited, Philadelphia 2000). Though so finished a drawing must have been conceived as a modello, the present work differs in many details from the final painting. Cioffi rightly highlights the theatrical and dramatic baroque representation of the transportation of the relics of the two martyrs, ‘held within one of the large, elaborately shaped reliquaries for which the Neapolitans were famous…’. The scene is a great theatrical event, the saints’ remains carried aloft in procession on the shoulders of elegantly garbed priests through a grand architectural setting reminiscent of a Baroque stage.

The theatricality of this image reflects prevailing artistic traditions in Naples at this time. The miraculous translation of the remains of the two martyrs – two of the six companions martyred with St. Januarius, patron of Naples – is elegantly displayed in a crescendo of movement, combining the religious message with a world of magical effects, enhanced by the central light emanating from the elaborately decorated baroque reliquaries. The figures are beautifully orchestrated, starting with the woman seated in the foreground, with two children and two youths witnessing the event while she points to the scene above. A little further to the right, an elegantly dressed young nobleman seems to be posing, while observing another young man holding a brazier. Surely this refined figure was inserted by Giaquinto to embellish the scene, while encouraging the viewer to look up to where the ceremonial and miraculous event is unfolding.  In the top section of the drawing, inundated by light, the ascending reliquaries are carried by young clerics, while others sing and play trumpets behind a high priest, who looks upwards at a glory of angels hovering above the two ornate reliquaries. The composition is strongly influenced by Solimena and could not be more in tune with the display of elegance and grandeur so much in vogue in Naples in the eighteenth century.

Exquisitely executed with a fluid and controlled use of the pen and ink, the sheet is embellished with various nuances of gray washes, heightened with white, on a delicate preparation of a subtle beige-pink tint, which gives the sheet and its media a harmonious uniformity of tonality.

A very accomplished artist and a skillful draughtsman, Giaquinto was, from the 1740s onwards, highly appreciated as a talented painter and frescoist of European stature. His beautifully and elegantly orchestrated compositions and delightful color schemes are highly individual, prefiguring the changes in taste which would occur in the late part of the eighteenth century.

A copy of this drawing is in Princeton.1