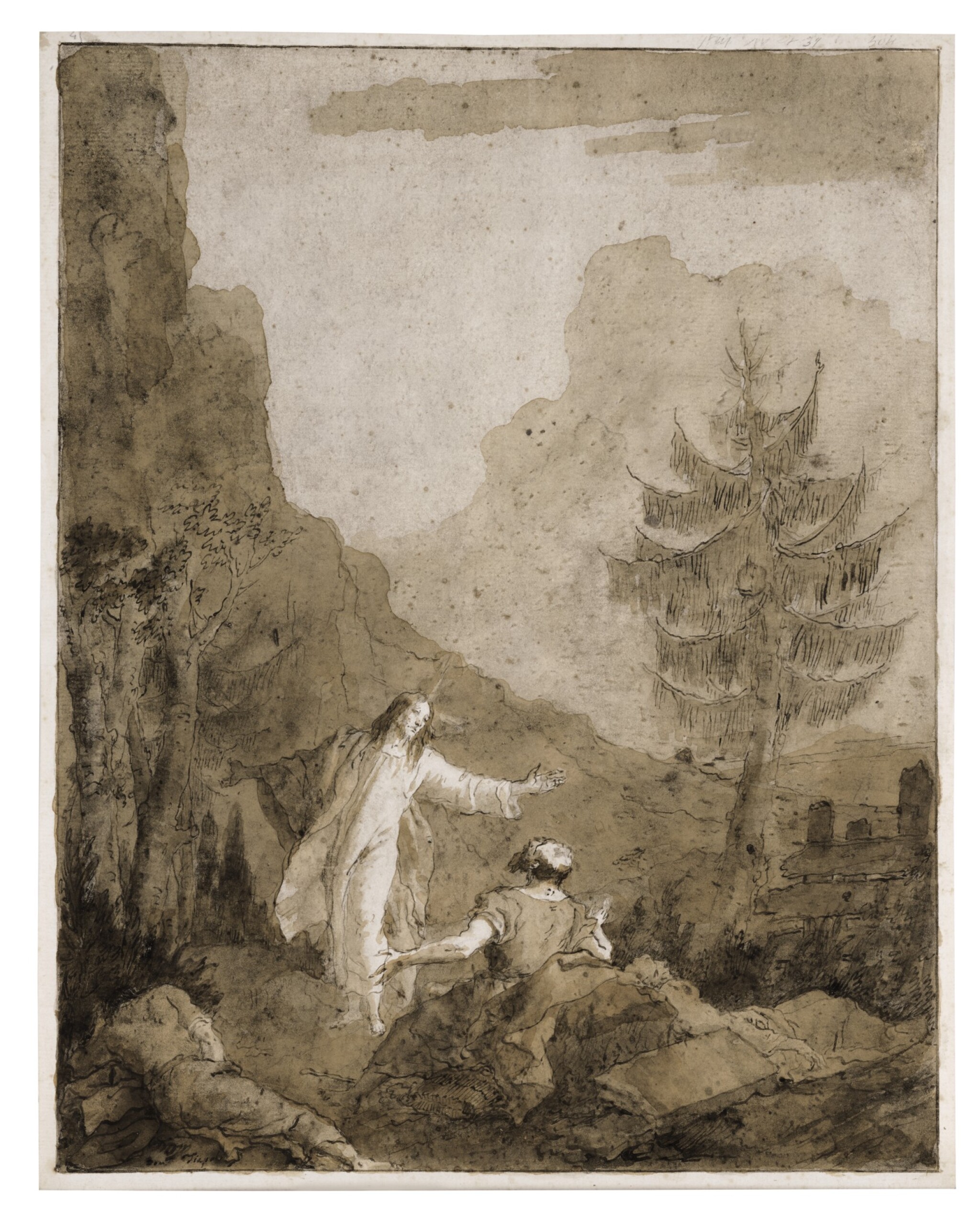 Hinge mounted to a modern cream mount. A small portion of the white border is covered by the current mount. There are pin prick holes to each of the four corners. There is minor scattered foxing visible to the area of the sky. The drawing remains in otherwise exceptionally good condition throughout, with the combination of media fresh and vibrant and the overall image strong. Sold in a reproduction decorative giltwood frame.

Adelheid Gealt and George Knox's authoritative publication on the remarkable series of similarly conceived drawings to which this sheet belongs, the so-called Large Biblical Series, has illuminated a fascinating exploration of the Christian story, from the parentage of the Virgin Mary to the martyrdom of Peter and Paul, which is of considerable intellectual and theological complexity, as well as incredible artistic skill. As they have pointed out, it is extraordinary how Giandomenico does not simply illustrate a text, but each time uses all the visual resources of Venetian art in his repertoire to create a uniquely original and inventive series of images.1Nothing is known of the original purpose or extent of the series, but some 313 drawings are currently known, scattered in public and private collections throughout the world. Given that some very familiar biblical scenes are missing, it seems likely that the series was originally even more extensive. It is generally assumed that it was created not as a result of any commission, but as a work of personal piety, begun after 1785 when the artist retired to the Tiepolo family villa at Zianigo. The strong emphasis throughout the series on the figure of Saint Peter has, however, led Gealt and Knox to suggest that if any patron were in some way influential in the creation of the series, it may have been Pope Pius VI (1717-1799), to whom Giandomenico dedicated a suite of prints.2

The drawings began to emerge onto the market via various French collectors in the nineteenth century. As Gealt and Knox suggest, it seems plausible that although the series seems never to have been bound into volumes, the drawings remained together as loose sheets until they were bought in Venice in 1833 by a Monsieur Fayet, who made a selection for himself and passed the rest of the drawings to Monsieur Luzarche, a former owner of the present sheet. An album of 138 drawings from the series, originating from the Fayet collection, is now in the Louvre.3