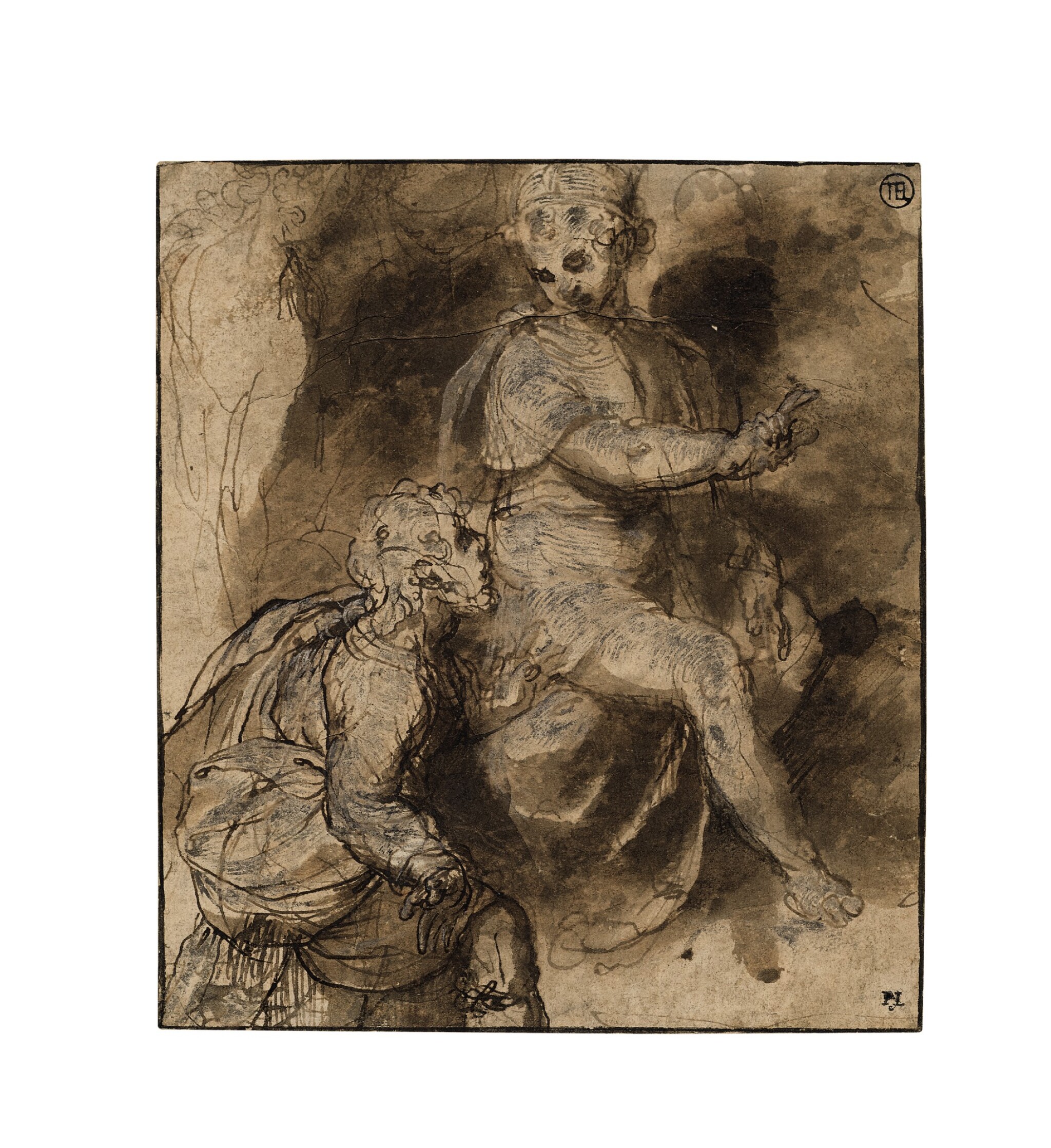 bears old attribution on the backing in pen and ink: by / I. OLIVER and in a recent hand in pencil: Giovanni de Vecchi

Laid down to an old decorative backing. There is some slight toning to the sheet and a horizontal crease to the upper quarter of the composition, most probably created when the sheet was laid down to its current backing. The ink has very fractionally sunk in places and there is oxidization to the white heightening. There are some small brown (studio?) stains to the upper right quarter. The drawing remains in otherwise predominantly good condition. Sold unframed.

The attribution of the present drawing to Taddeo’s early career, from which no documented work has survived, can be based on the very distinctive characteristics typical of his graphic style, first clarified in John Gere's magnificent book on the artist’s development, studied from his surviving graphic oeuvre.1 Gere wrote: 'Nuances of facial type and expression are among reliable indications of an artist's personality, and there are certain faces that one soon comes to recognize...’.2In this rare early drawing, the seated young man wearing a crown or a hat has a typical Taddeo face, with upward-slanting, rounded, blackened eyes, a flat nose, and many curls of hair emerging from his crown or hat. The outlines of the two main figures, one seated and the other kneeling, are vigorous and energetic with numerous pentimenti. Taddeo has given weight to their modelling. The solidity of the seated figure is enhanced by parallel lines, drawn with white heightening, to indicate the light falling from the left, while some shadows are emphasized in pen and ink, especially in the lower part of the mantle underneath the right leg and outside its contour to the right. The same use of white heightening, similarly applied with close parallel strokes, is evident in the preparatory drawings related to the frescoes of the Mattei Chapel, in Santa Maria della Consolazione, a commission Taddeo secured just after his return to Rome in 1553, following a two-year stay in Urbino.3

The seated youth is highly reminiscent of the figures of Polidoro da Caravaggio (1492-1543), a fascinating draughtsman and artist who achieved his fame as a façade-decorator in Rome. He played a pre-eminent role in the formation of the young Taddeo, who, like many other artists of his generation, spent his earliest years copying the famous decorations, executed before the Sack of Rome in 1527.

The kneeling figure, on the other hand, is characterized by a more intricate use of the pen and ink, with many changes and continuous variations, searching for a final solution, especially in the draped cloth around the figure. There are indications of several pentimenti also in the position of his left hand. This figure, especially in the handling of the drapery, appears stylistically closer to Perino del Vaga (1501-1547). Taddeo arrived in Rome in the early 1540s, and though Perino died in 1547 there is no evidence that the young Taddeo was in contact with the elder master, but he was certainly exposed to his works, painted and drawn.

Both Polidoro and Perino were pivotal figures in the development of Taddeo's style, their influences strongly evident in his early and formative years.

This sheet must date from around 1550, before Taddeo was summoned to Urbino in 1551 by Duke Guidobaldo II della Rovere, to complete the decoration of the chancel of the city’s cathedral.

For a later double-sided drawing by Taddeo, connected to the decoration of the Frangipani Chapel in San Marcello al Corso, Rome, see lot 214.