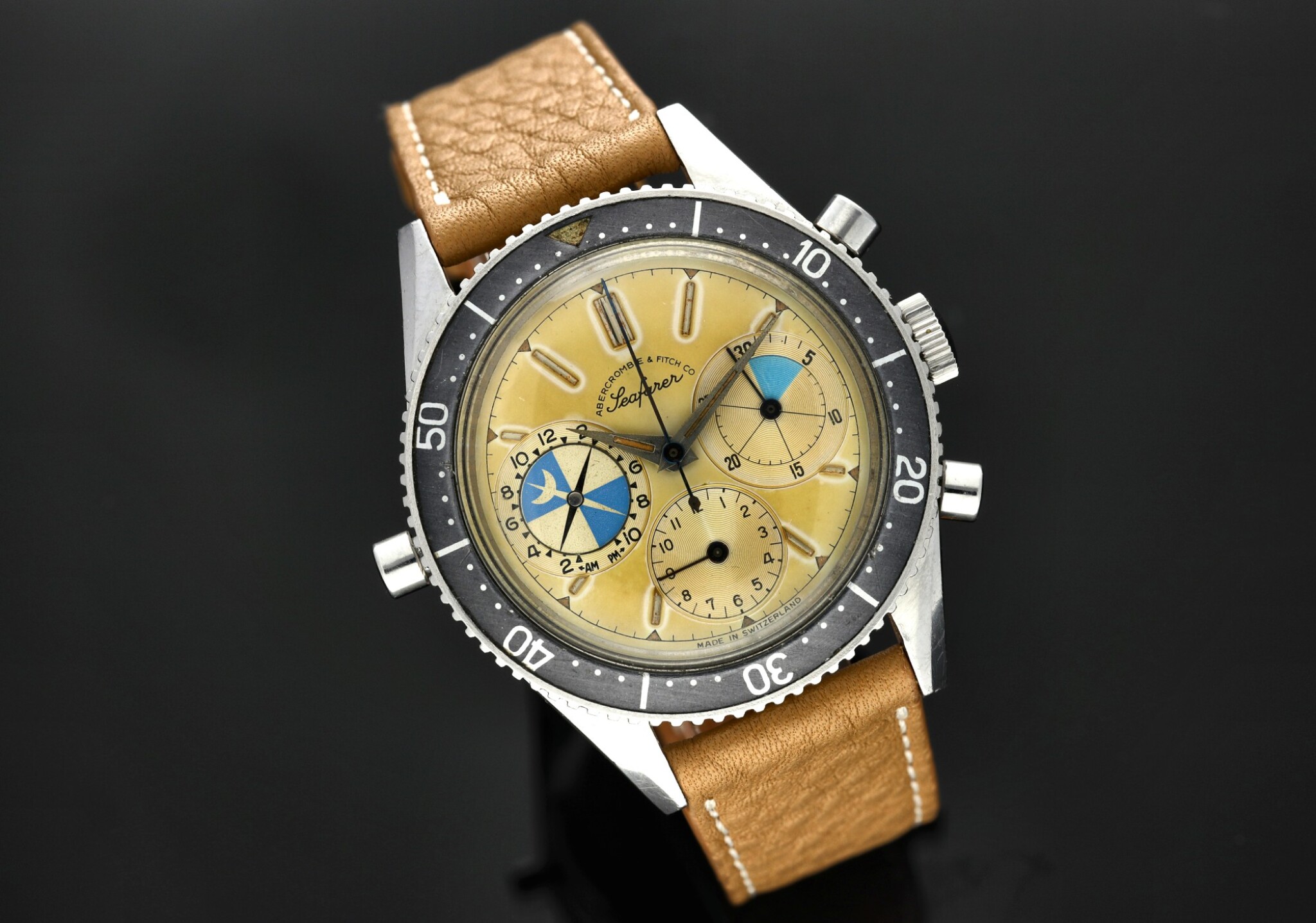 Retailed by Abercrombie & Fitch: A stainless steel chronograph wristwatch with tide indication, Circa 1963

Case: The case is in overall excellent condition with signs of light wear. The case remains unpolished and the lugs retain strong proportions. The crown remains sharp. The bezel insert with some light patina, the luminous material at 12 o'clock is in tact but shows normal signs of age. Replaced crystal but is accompanied by the original crystal. Please note that the buckle and strap and generic and not signed Heuer.

Dial: The dial is in overall excellent condition and has taken on an attractive creamy patina - giving it tropical look. There is a slight halo effect found around the stick markers. The luminous plots remain in tact and overall the dial is blemish free.

David Abercrombie Founded his Eponymous brand in 1892 before joining forces with financier Ezra Fitch in 1900 to create the brand we know today, Abercrombie & Fitch. The self-styled, “Greatest Sporting Goods Store in the World” was originally located on Broadway in New York and offered the highest quality sporting equipment for those interested in outdoor pursuits such as hunting, fishing, climbing, driving, flying and sailing. Their client list, a Who’s Who of the era’s great and good included, amongst others, Howard Hughes, Ernest Hemingway, the Duke of Windsor, Amelia Earhart and Presidents Roosevelt, Hoover and Einsenhower. Their 1950’s flagship store on Madison and 45th contained a shooting range, a roof top pool large enough for fly and bait casting lessons, a resident golf pro, gunsmiths and full time watchmakers.

The Abercrombie/Heuer relationship started in the mid 1940’s, with Abercrombie commissioning sporting style watches, primarily 3 register Chronograph’s such as the Ref 346 based on Heuer’s existing range of high end and robust models.

Subsequently, Abercrombie requested Heuer produce a watch specifically for their fishing and hunting clientele based on the 1930’s ‘Solunar Theory’ that suggests the best time of the day or month for fishing and hunting can be dictated by the position of the sun and moon. Despite the challenges, and with the assistance of a school age Jack Heuer and his high school physics teacher, Heuer produced the colorful ‘Solunar’ model with tide indicator. Whilst the Solunar represented a commercial failure for Heuer and Abercrombie, they were undeterred, deciding that the addition of a chronograph function could broaden the appeal of the model. To do this, they had to modify a manually wound Valjoux 71 movement to incorporate the high/low tide indicator with the chronograph, re design the dial, and replace the running seconds at 9 with the tide indicator.

The ‘Seafarer’ as it was called, was introduced in 1950 and went through 10 different versions until its retirement in the mid 1970’s. Of these 10 variants, the first, the Ref 346 with syringe hands and 37.5mm case with a screw down case back is rarely seen, but the most elusive, desired and iconic is this current example, the Ref 2446. Housed in Heuer’s robust Autavia case introduced in 1962, the Abercrombie Ref 2446 featured a screw down case back, rotating bezel graduated for hours or minutes, silver/blue dial, dauphine hands with thin lume and a water resistance rating of 330 feet. Produced somewhere between 1962 and 63 and in a limited run thought to be less than 25 in total, the 2446 screw back is the rarest of the all Seafarers and Heuers.

To the best of our knowledge, fewer than six Ref 2446 have been known to the market. This recently discovered unicorn comes directly from the family of the original purchaser. The original owner, an avid outdoorsman, fisherman and camper purchased the watch at same time he purchased his first home In Norwalk, CT in 1962. On his passing in the mid 1980’s his son inherited it, storing it in a desk draw for safe keeping. The recent passing of the son, and subsequent home clearance by the grandson has resulted in this exciting discovery. Presented in remarkably original condition, it is possibly the best example of a Ref 2446 Seafarer to come to the public domain. It retains its original dial, hands, movement and unpolished Autavia case. The dial, virtually free of blemish has aged gracefully and beautifully, with a consistent creamy patina to the main dial and a slight halo effect found around the stick markers.

Sotheby’s is proud to offer this amazing example of one of the most desirable and rare Seafarer’s to have ever come to market.

Acknowledgements: We would like to thank OnTheDash and Heuer Vintage for their contributions to this note.