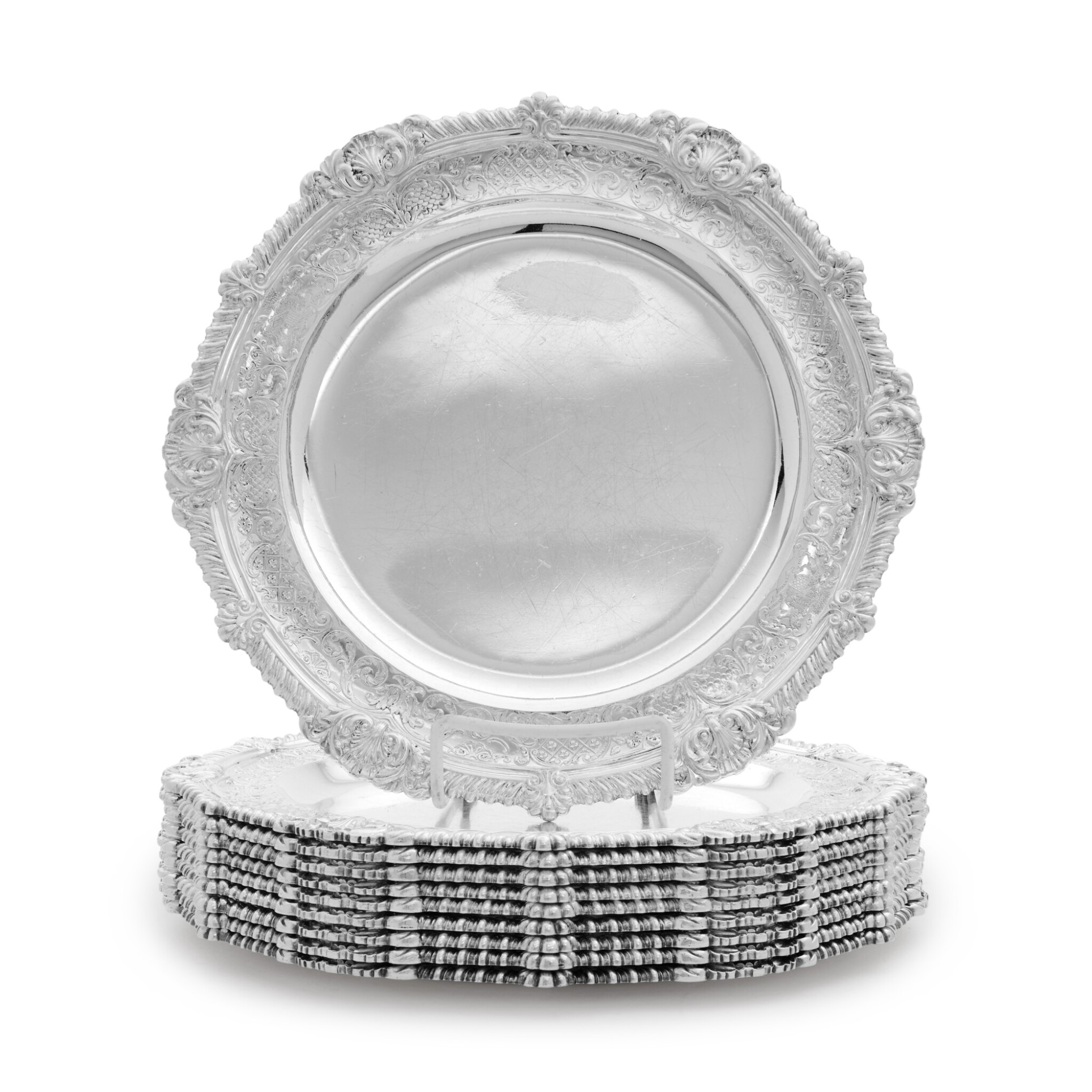 richly chased borders with diaperwork and scalework between scrolling foliage, with fluted and gadrooned shell and foliate rims, each engraved with arms below a Duke's coronet

Surfaces with knife cuts and nicks from use, otherwise good condition.

The arms are those of Howard quartered with Brotherton, Warren and Fitzalan, as borne by Bernard Edward, 12th Duke of Norfolk (1765-1842), who succeeded his cousin in 1815. He became a Fellow of the Society of Antiquaries in 1812 and a Fellow of the Royal Society in 1816. By Act of Parliament, June 24, 1824, he and his successors were empowered to exercise the office of Earl Marshall, notwithstanding their adhesion to the Roman Catholic faith. In 1829, he was admitted to his seat in the House of Lords, under the Roman Catholic Relief Bill. The 12th Duke married in 1789 Elizabeth, 3rd daughter of Henry (Belasyse), Earl Fauconberg. The 12th Duke died aged 76 at Norfolk House and was buried at Arundel Castle.

The present plates form part of the 12th Duke of Norfolk's extensive dinner service supplied by Rundells and noted for its richness of decoration and extravagant use of silver. The complete service, with the maker's mark of Paul Storr and hallmarks from 1808 to 1817, was divided between the Duke's grandsons, the 14th Duke of Norfolk and Edward, 1st Baron Howard. Their services, today at Carlton Towers in Yorkshire and at Arundel Castle, comprise six massive soup tureens, four wine coolers, twelve entrée dishes, and additional dinner plates and meat dishes. Over two thousand ounces of the service were sold in Christie's, New York on October 20, 1999, lot 241 and a further thirteen hundred ounces were sold Christie's, New York, October 19, 2001. Twelve plates from the service were sold from the Neil and Gina Smith Collection, Sotheby's, London, 3 July 2019, lot 129. Other pieces from the service are in the Gilbert Collection, Victoria and Albert Museum, London (T. Schroder, The Gilbert Collection of Gold and Silver, Los Angeles, 1988, pp.425-429) and the Detroit Museum of Arts, Detroit.