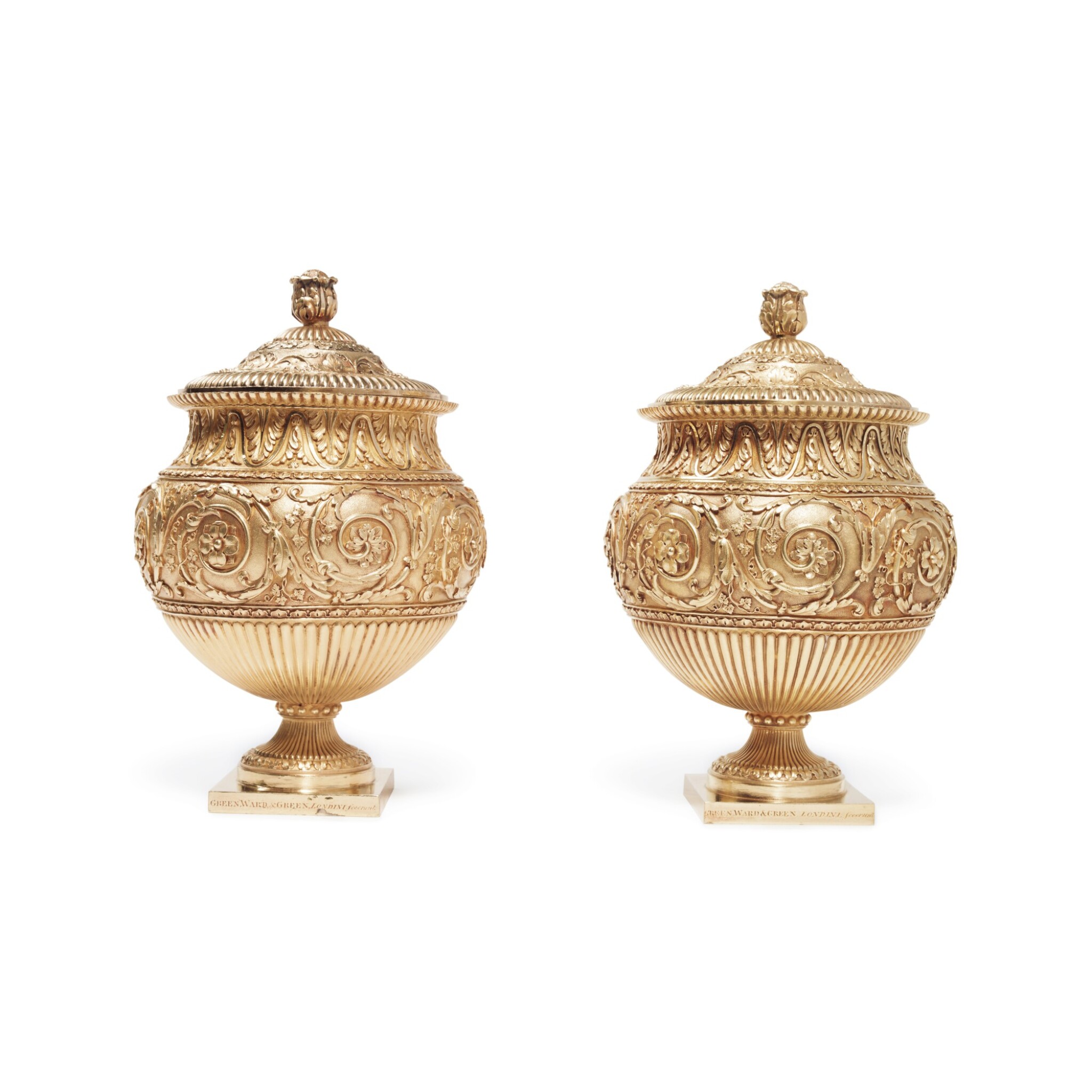 after Roman marble models, vase shaped and on square plinths, the lower body fluted above a band of scrolling foliage on a matted ground, the shoulder with a band of acanthus leaves, the cover chased with grapevine and with a bud finial

One foot with small dent at angle. The other foot with gilding flaking and bubbling. Otherwise in good, crisp condition.

The source of the design for these sugar vases is a Roman funerary urn in the celebrated antique sculpture collection of the 1st Marquess of Lansdowne, identified by David Udy in Piranesi's Vasi, the English Silversmith and his Patrons, Burlington Magazine, December 1978, p. 837, fig. 55-57. Unlike the Warwick Vase, which had been popularized by Piranesi's engravings of the eighteenth century, the Lansdowne urn apparently was reproduced directly in silver before John Duit engraved it around 1813. The design in silver is attributed to the sculptor John Flaxman, who used a variation of the urn in his tomb monument for Sir Thomas Burrell in 1796. Flaxman became Rundell's most important designer around the time the firm became Royal Goldsmiths in 1804. In this period, Digby Scott and Benjamin Smith ran Rundell's workshop, executing the designs and models supplied by the firm in silver and silver-gilt.

A comparable set of eight vases of this design, larger in size and without the handles, were made for George IV as Prince of Wales at a cost of £376 4s. This set can be found in the Royal collection and are illustrated in Carlton House: The Past Glories of George IV's Palace, 1991, cat. no. 95, p. 133 and was manufactured by Benjamin Smith and Benjamin and James Smith in 1808 and 1809.

The retail goldsmiths and jewelers Green & Ward opened business at 1 Ludgate St. in 1789 and continued with minor name changes at 20 Cockspur St., Pall Mall, until 1848. Among many important items they sold were the silver-gilt Wellington Shield designed by Thomas Stothart in 1816 and a massive pair of candelabra by the workshop of Benjamin Smith, 1822, preserved in the Wellington Museum at Apsley House (John Culme, The Directory of Gold and Silversmiths, Vol. 1, pp.194-5).