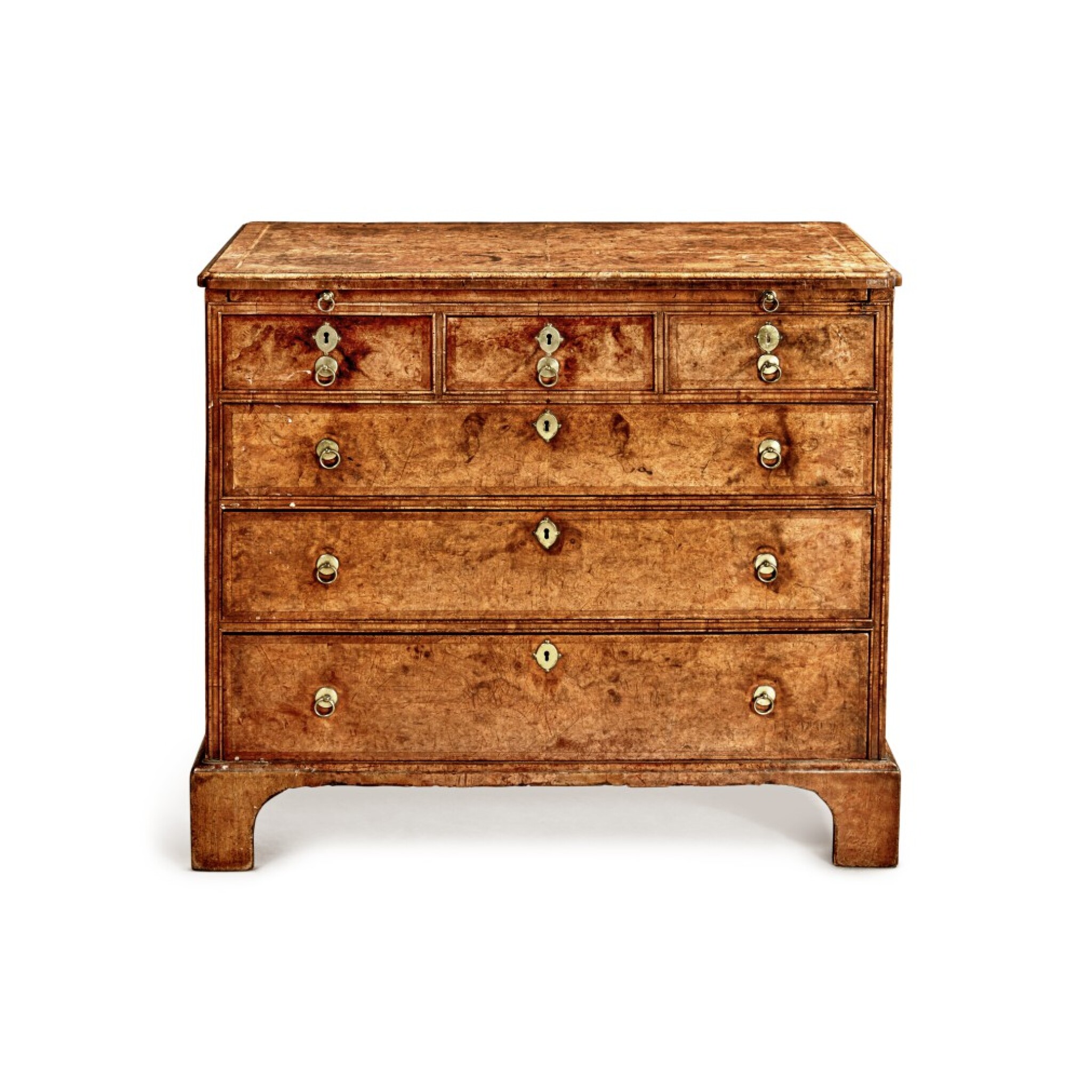 the ovolo-moulded top with re-entrant corners, above a green baize-lined slide and two short drawers simulated as three drawers and three long graduated drawers, with carcase cockbeads; one side with a fitted pen drawer, the other with a simulated drawer, above brass carrying-handles; bracket feet later; veneer on the back apparently original

Generally in good condition overall, with a warm, rich colour and patination. Colour is warmer than it appears in online images, and please note that colour can render differently on different screens and devices. With typical minor dents, marks, scratches and shrinkage cracks due to age and use. As stated the veneer to the back apparently original and feet replaced. Handles apparently original, and locks to the two shorter drawers apparently original. A few small, old marks on the top of the chest, including a dark ring-mark near the front, and a few small patches to veneer. Top with a shorter and longer horizontal shrinkage crack, and two old infilled vertical shrinkage cracks towards the sides. The slide is in good condition and there is some resupporting on the underside with new oak. The left side panel has a restored scratch near the back edge there is a vertical shrinkage crack below the handle. The back panel with an age split along the join with the left side panel. The right side panel with some old inactive woodworm near the front edge and a vertical age crack towards the rear. The side drawer with compartments contains a later oak small pen drawer which was supplied by Spink Restoration.

Dr. Adam Bowett dates this high-quality commode to after 1730 because of the ovolo moulded top and base and cockbeaded surrounds to the carcase rather than to the drawer edges, whilst the thin-railed carcase construction would indicate a terminus ante quem of 1740. He also suggests the unusual presence of a side drawer fitted for inkwells and pounce pots provides evidence that the pull out 'brushing' slide beneath the top was in fact intended for writing - though observing this wouldn't preclude the chest from also being used as a dressing commode, the role this form has traditionally been assigned. Certainly the equally unusual veneering to the back enables the chest to stand proud of the wall in any interior, and made theoretically more portable with the side carrying handles, the chest would be able to serve multiple functions in different settings.

Evidence this model could be used a dressing table comes from a 1730 invoice from the royal cabinetmaker Benjamin Goodison for supplying King George II's daughters Amelia and Caroline at St James's Palace with 'three Wallnuttree Dressing Tables upon Castors with Large Drawers to the Bottoms and a Sliding Tables to each of them' (cited in Bowett, p.106 note 21). Thomas Sheraton, however, would later categorise the model as writing furniture, calling this type of chest a 'Lobby Chest' in his Cabinet Dictionary (1803): 'a kind of half chest of drawers, adapted for the use of a small study, lobby, or small lodging room...four drawers in height, rising to 3 feet in height, and their length about the same. The top drawer is usually divided into two; and sometimes there is a writing slider which draws out under the top.'

This chest's particularly fine walnut veneers and high standard of carcase construction have made it a prized acquisition of numerous previous owners throughout its history, more recently the leading 20th century London antiques dealer Ronald A. Lee and the great late-20th century walnut collector John Parry.