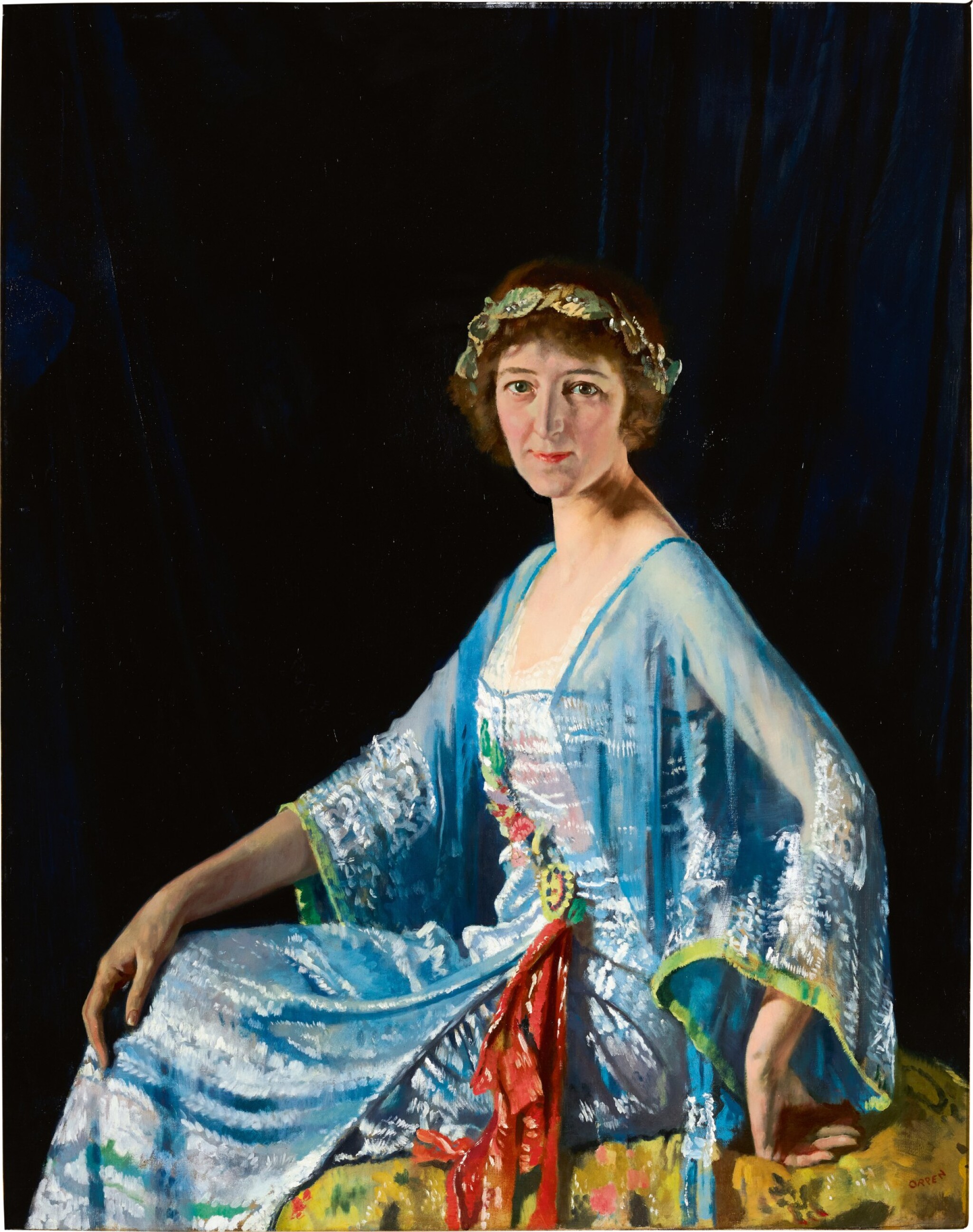 Original canvas. Some faint signs of craquelure in the background to the right of her right arm and shoulder which appear stable, and some minor retouchings - only visible upon very close inspection. Overall the work appears in very good condition. Examination under ultra-violet light reveals some areas of retouching along each edge. Also flecks of retouching to the left of her head and elsewhere in the background, mainly the lower half. A larger area of retouching approximately 8cm across in the upper right quadrant which relates to a repaired tear, corresponding to a patch vero. Held in a decorative gilt plaster frame.

The sitter; thence by descent
Sale: Christie's, London, 22 May 1998, lot 28
Purchased at the above sale by the present owner
P G Konody and Sidney Dark, Sir William Orpen, Artist and Man, London, 1932, p. 271
Sir William Orpen was one of the first artists chosen by the British Ministry of Information in 1917. After the war, he was commissioned to paint a work to commemorate the Peace Conference at Versailles and then he remained in Paris in the early 1920s, maintaining a studio at the Hotel Majestic. This allowed him to take advantage of any portrait commissions from wealthy tourists (particularly Americans) holidaying in Europe. He sought commissions to rebuild his portrait practice, and retrieve his financial situation, as whilst an Official War Artist, his only source of income was his major’s pay. He also had the added expense of maintaining a studio in London as well as Paris and having to provide for his growing family. The Drums commissioned Orpen to paint both the mother (for £1,500), and the son, Master John S. Drum, Jr. (for a further £500).

Orpen was not particularly captivated by 1920s ladies’ fashion, so when an opportunity arose, he would revel in depicting the more extravagant, colourful and intricate costumes of his wealthier female sitters. Portrait of Mrs Georgiana Alice Drum is a prime example. The artist has boldly depicted the brilliant colours of her attire and has expertly captured the detail of each fabric, for example the delicately draped organza. The overall effect of the shimmering costume is heightened by the dramatic dark background and the only flash of colour in the background, is a deep blue of a velvet curtain in the upper right corner. Orpen achieved the same effect in other portraits, such as Mrs. Ruby Melvill (1920, Mildura Arts Centre, Australia), Miss Jenny Simson (1921, private collection), and Dame Madge Kendal (1926, Tate).