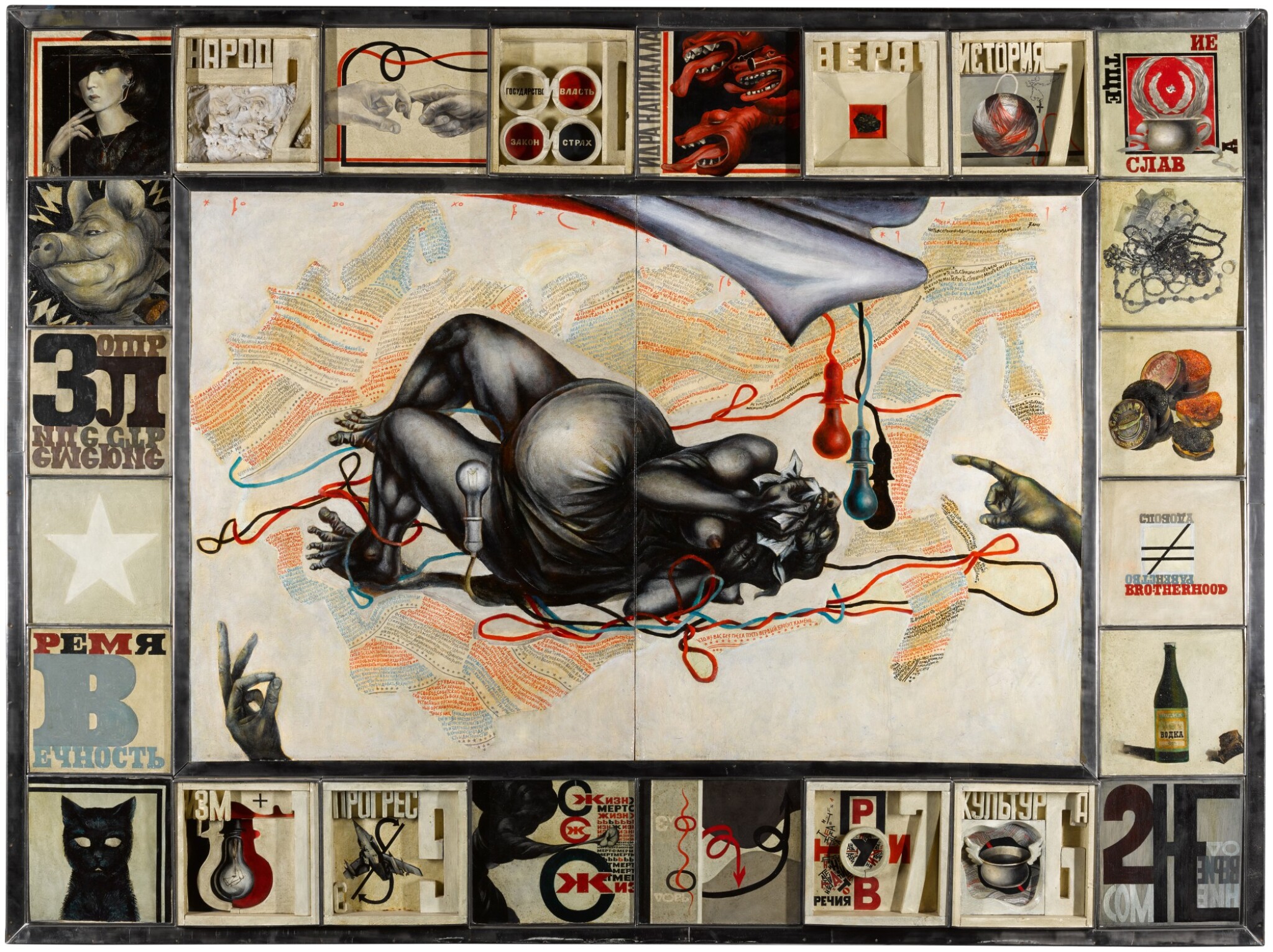 The work consists of two central canvases and 24 smaller panels. Each of the small panels is individually framed and the whole work is held in a metal frame. Some of the panels on the right have slightly come out of their frames. There is craquelure in places, most notably to the lower right corner of the large panel on the right. The same panel has a protrusion with an associated paint loss to the upper right edge. Scratches, abrasions and minor losses are scattered in places. The metal frames show scratches, dents and staining. There is a general layer of surface dirt and dust and the varnish has discoloured. Inspection under UV light reveals minor spots of retouching to the panel with the star on the left, to the one just below as well as to the fourth panel from the left in the bottom row.

Two years after his graduation from the Moscow Pedagogical Institute in 1965, Sergei Volokhov exhibited at the Blue Bird (Sinyaya ptitsa) café alongside Vitaly Komar and Alexander Melamid, future Sots Art pioneers. In 1968-1969 Volokhov worked at Vladimir Weisberg’s studio and in 1974 he was among the participants of the Bulldozer exhibition, a seminal event in the history of unofficial Soviet art.

Russia consists of 26 individual parts, with the overall composition reminiscent in its form of Orthodox hagiographical icons. The central image shows the body of a pregnant woman curled up over a map of the Soviet Union, surrounded by light bulbs and pages from the Soviet constitution, alluding to Lenin’s famous 1920 slogan ‘Communism is Soviet power plus the electrification of the whole country’. With words including ‘fear’, ‘government’ and ‘vanity’ surrounding the harrowing central image, the work acts as a contemplation on the fate of the Bolsheviks’ utopian ideas.

In its aesthetic and the questions it addresses, Russia can be compared to Komar and Melamid’s iconic The History of the USSR from the mid-1970s. Yet, unlike the infamous Sots Art duo, who emigrated from the Soviet Union shortly after completing the work, Volokhov remained in the country throughout the 1970s and 1980s. He was forced to hide Russia from the Soviet authorities for several years, until it was exhibited at Wotersen Castle in Germany in 1989. Russia was subsequently shown at Galerie Sandmann in Berlin in 2009 and at Volokhov’s retrospective exhibition at the Kunstverein Salzgitter in Germany in 2010.