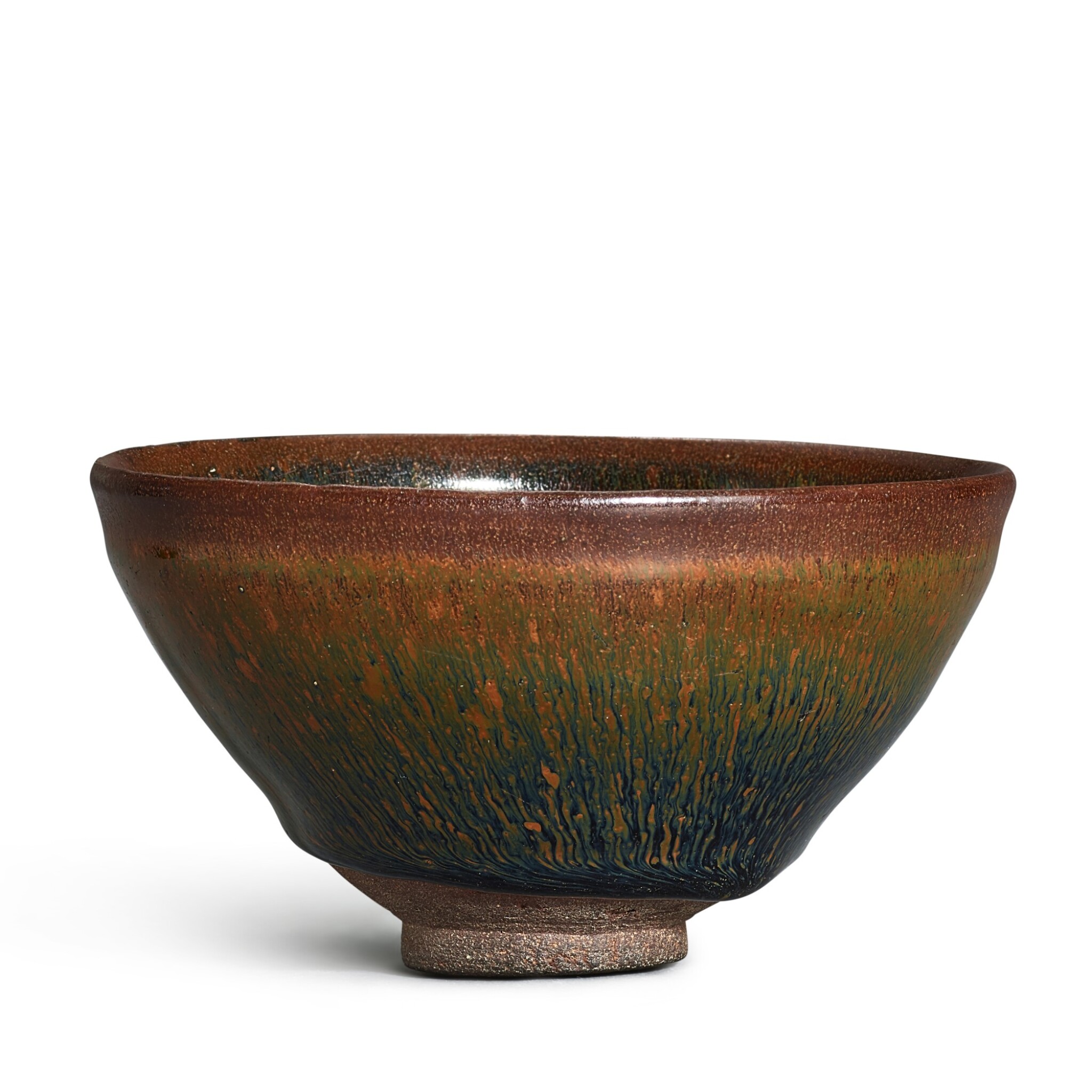 In good condition, with only slight warping to the rim and expected glaze firing imperfections.

Jian tea bowls were renowned for their unique suitability for tea drinking as the fine foam of the whisked powdered tea contrasted attractively against the dark glaze of the vessel. The thickness of the glaze helped keep the beverage warm and protected the hands of the drinker against scalding. Emperor Huizong (r. 1101-25), well known for his love for tea, stated that the black-glazed tea bowls, especially those decorated with 'hare's fur' like the present example, were the most desirable. Together with whipped tea, Song dynasty 'Jian' tea bowls are believed to have arrived in Japan in the Kamakura period (1185-1333) when Zen Buddhism was introduced, and have since then been greatly treasured.

See similar bowls of this type, including one from the Arthur M. Sackler Museum, included in the Museum's exhibition Hare's Fur, Tortoiseshell and Partridge Feathers, Hare's Fur, Tortoiseshell and Partridge Feathers, Chinese Brown- and Black-Glazed Ceramics, 400-600, Cambridge, 1995, cat. no. 79; another, in the Palace Museum, Beijing, illustrated in The Complete Collection of Treasures of the Palace Museum. Porcelain of the Song Dynasty (II), Hong Kong, 1996, no. 204; another bowl with a metal-bound rim in the Kyoto National Museum, Kyoto, illustrated in Chugoku no toji. Temmoku [Chinese ceramics, tenmmoku], Tokyo, 1999, pl. 39; and a fourth in the Meiyintang collection, also with a metal-bound rim, illustrated in Regina Krahl, Chinese Ceramics from the Meiyintang Collection, London, vol. 1, 1994, no. 530.

The characteristic feature of ‘Jian’ tea bowls of the glaze inside having pooled off-centre, which has been remarked by many scholars, has been discussed in an article by Marshall P.S. Wu, who suggests that a deliberately oblique setting of the bowls in the saggar helped to avoid the formation of stalactiform glaze drops that might stick to the saggar (Marshall P.S. Wu, ‘Black-glazed Jian Ware and Tea Drinking in the Song Dynasty’, Orientations, vol. 29, no. 4, April 1998, pp. 22ff, figs 2-5).