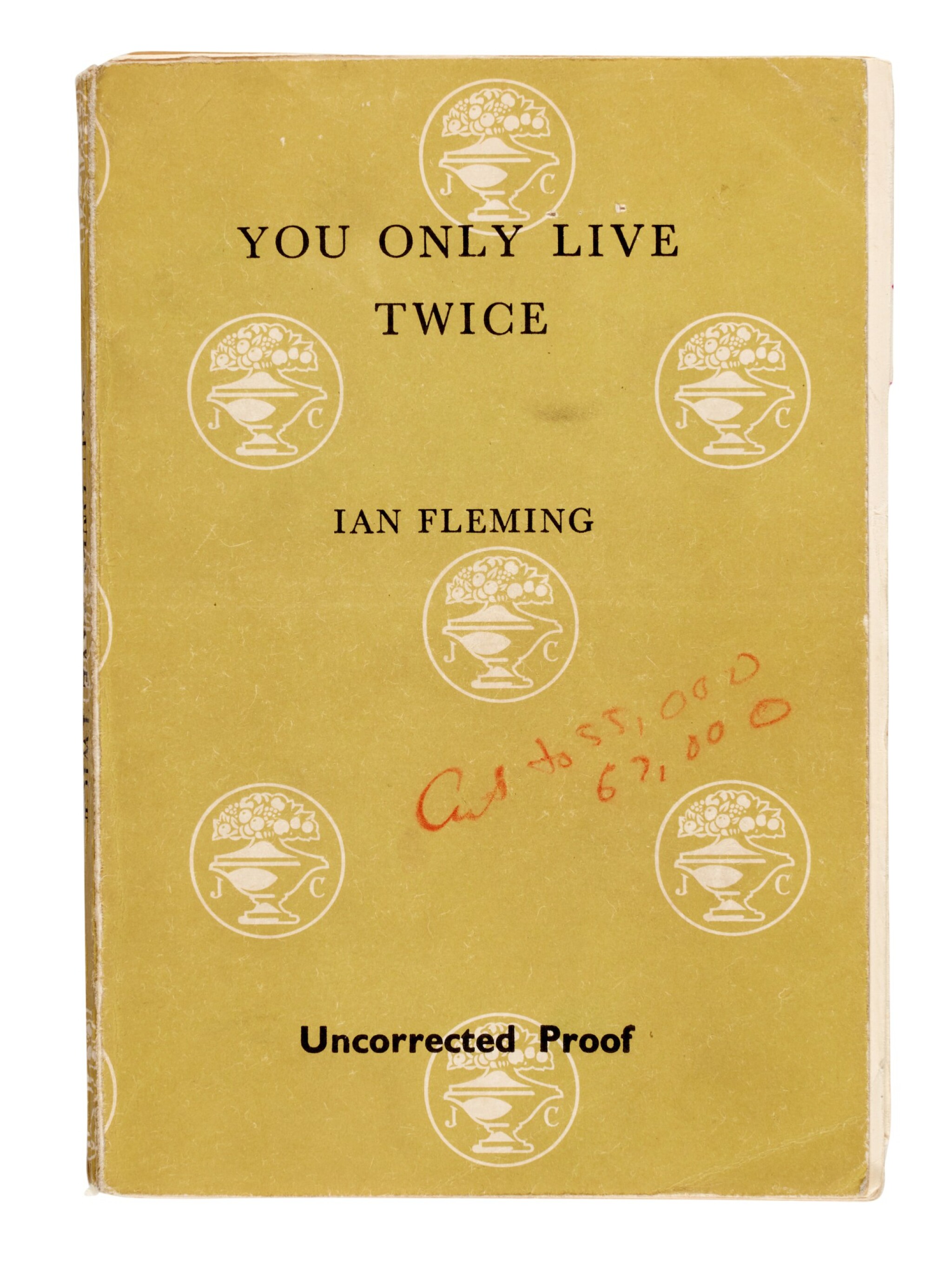 You Only Live Twice

uncorrected proof copy for the first English edition, marked up for serial publication in three parts in Playboy Magazine, WITH CORRECTIONS IN RED BALLPOINT, SEEMINGLY AUTOGRAPH, TO 53 PAGES, and with further extensive corrections and emendations, mostly in pencil, by the copyeditor, including about 16,000 words marked for deletion, three stapled slips marking tripartite division for serial publication, 8vo, 1963-64, loose in original olive printed wrappers, housed in a blue morocco gilt folding box; light wear to wrappers; adhesive staining to the three slips marking division

[with:] File of correspondence relating to the text: including two letters signed by Phyllis Jackson, Fleming's American agent, to A.C. Spectorsky of Playboy, sending him a typescript of You Only Live Twice ("this is not the final edited copy") and subsequently the current "corrected proof" of the novel, 21 August and 28 October 1963; letter signed by Beryl Griffie-Williams, the author's secretary, to Playboy, with accompanying one-page list of further corrections to the text (with a pencil note that the list was "Typed by Fleming"), 19 November 1963; Ian Fleming, carbon copy letter, initialled, to Michael Howard of Jonathan Cape Ltd ("...We seem to be having the most tremendous arguments about what is a "Tanka" and what is a "Haiku"..."), 1 page, 5 December 1963, this copy then forwarded to Playboy; two carbon copy letters by Howard to Fleming on Japanese prosody and other final textual issues, 2 pages, 6 December 1963, and a carbon copy letter by Griffie-Williams to Howard agreeing to his changes on Fleming's behalf, 10 December 1963; autograph notes by Arlene Bouras of Playboy on the novel and calculations on cuts to the text ("Total word count 68,181; material cut 16,002 | leaving 52,179"), 13 pages, headed notepaper; list of Japanese terms used in the novel, typed and handwritten, 3 pages; total 12 items, each in an individual archival plastic sleeve

A PROOF COPY INCORPORATING FLEMING'S FINAL REVISIONS TO HIS PENULTIMATE BOND NOVEL, AND REVEALING ITS PREPARATION FOR SERIAL PUBLICATION. The novel was serialised over three issues of Playboy from April to June 1964, just after the publication of the first edition in March. The magazine began work some months before the book appeared and based their text not on a fully corrected text but on this uncorrected proof, hand-corrected by the author, which they were sent on 28 October 1963. The current proof includes autograph corrections that are not in the list of textual corrections printed by Gilbert. Playboy were presumably sent this text at such an early stage to allow them to make the cuts that would be needed to fit the text into the three issues of the magazine. However, the text was not quite final: the editorial staff at Playboy themselves inserted a further short list of corrections sent by Fleming's secretary on 19 November, and they were sent correspondence on further revisions well into December.

The long association between James Bond and Playboy began in 1960 when the magazine printed 'The Hildebrand Rarity' shortly before its appearance in Fleming's collection of Bond stories, For Your Eyes Only. On Her Majesty's Secret Service was serialised in Playboy in 1963 (a compliment returned in the 1969 film, which includes a scene in which Bond reads a copy of the magazine), whilst the January 1964 issue included 'Property of a Lady' - Bond's foray into the auction world, commissioned by Sotheby's for its own magazine in 1963. The Man with the Golden Gun and Octopussy both appeared in Playboy later in the 1960s, and as late as the 1990s two of Raymond Benson's James Bond stories were published in the magazine.