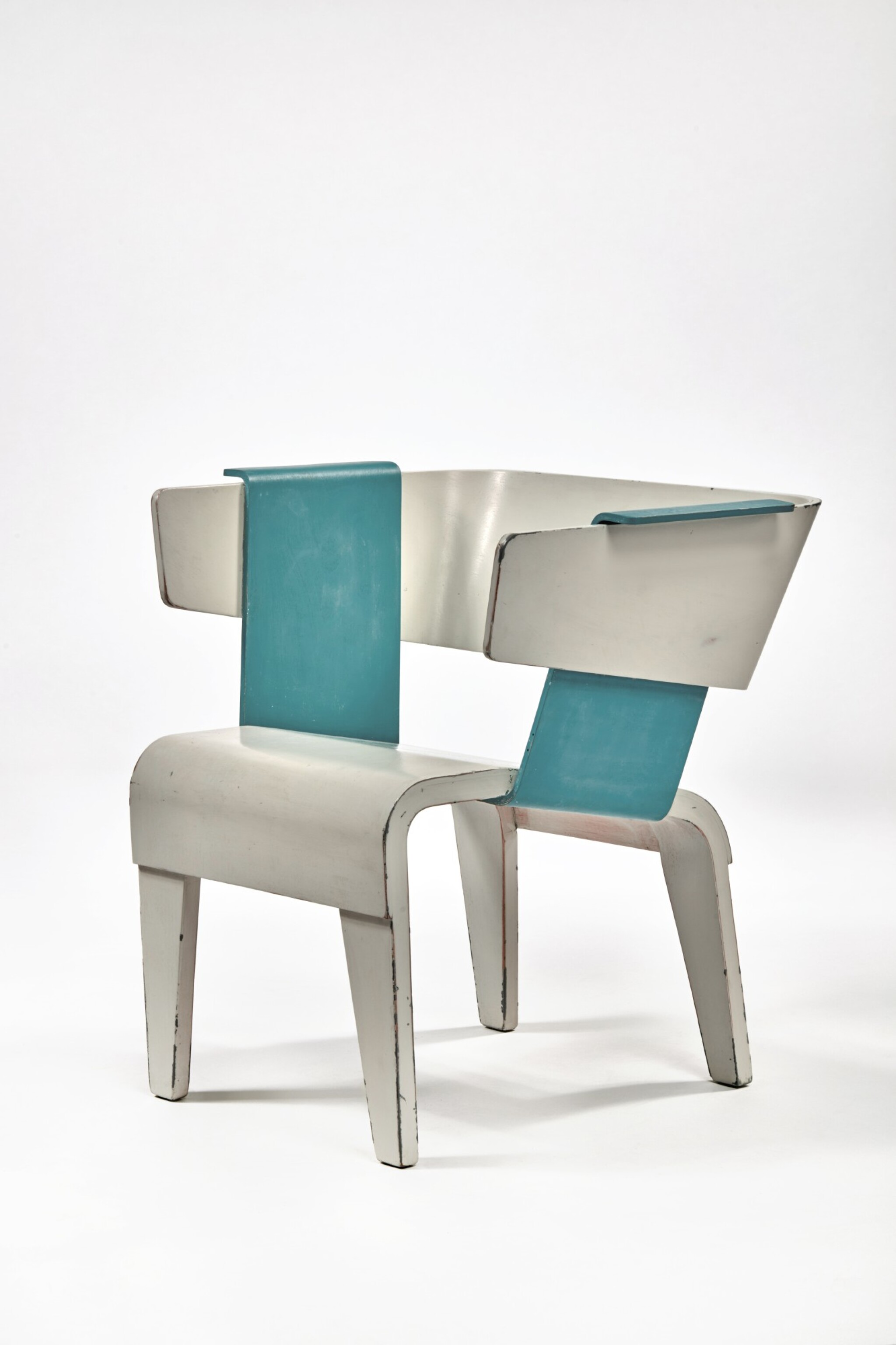 Overall in very good condition. This rare model, of which ten examples are known to exist, skillfully incorporates modern plywood-bending technology to deliver a design assembled from the minimum number of components with no visible means of connecting. The wooden surfaces are in age-appropriate condition overall and present with light surface scratches, occasional dents and abrasions concentrated to the edges and corners of the chair, consistent with gentle use. The back of the seat presents with one slightly more pronounced abrasion to the wood measuring approximately 1/2 inch wide. When viewed firsthand, the painted surface presents with a beautiful combination of off-white and light cerulean blue. The combination of white and blue correspond to the original color palette of the chair. Indeed, upon acquiring the work in 2002, the present owner employed a conservator to remove a later layer of white paint that had been applied onto both sides of the chair at a later date. On removing this later layer, the present first-generation blue paint, as shown, was revealed and subsequently stabilized and restored. The painted surfaces retain a bright appearance throughout with some occasional paint losses concentrated to the edges and corners of the piece. The edges of the piece with older in-fill repairs, most visible on the legs of the chair. An incredibly rare example of the model in well-preserved, functional condition.

Sotheby’s would like to thank Rob Driessen and Jurjen Creman for their assistance with the cataloguing of this lot.


Rietveld’s design for an easy chair skillfully incorporates modern plywood-bending technology to deliver a design assembled from the minimum number of components, and with no visible means of connecting. Both in terms of materials and concept, the "Danish" chair presents as a unified, one-piece entity potentially suitable for serial production. However, despite the elemental simplicity of the design it would appear that very few examples were ultimately produced, and that several of these, including the present example, were retained by the designer. Furthermore, amongst those extant examples, of which around ten only can be counted to exist today, there is a strong degree of variety both in terms of the shapes of the elements, and moreover the colors used, with no two examples being painted alike.

Of these 10 examples, two are prototypes: one of metal, and one of fiberboard, and both are retained in the Centraal Museum, along with an example painted red with white rims. Other painted examples are retained in the Delft Technical University, and on loan to the Rijksmuseum. There exist three examples in natural, unpainted plywood, these being retained in the Minneapolis Museum of Art, the Musée des Beaux-Arts de Montréal, and the Vitra Design Museum.

Only two examples of this important design are in private collections - the present example, and another grey-painted with white rims, sold at auction in 2009. The present example is unique amongst all painted versions of this design, by virtue of the blue-painted plywood strap that contributes to a sensation of visual weightlessness. The chair acquired the title “Danish Chair” subsequent to an exhibition in Denmark in 1952.