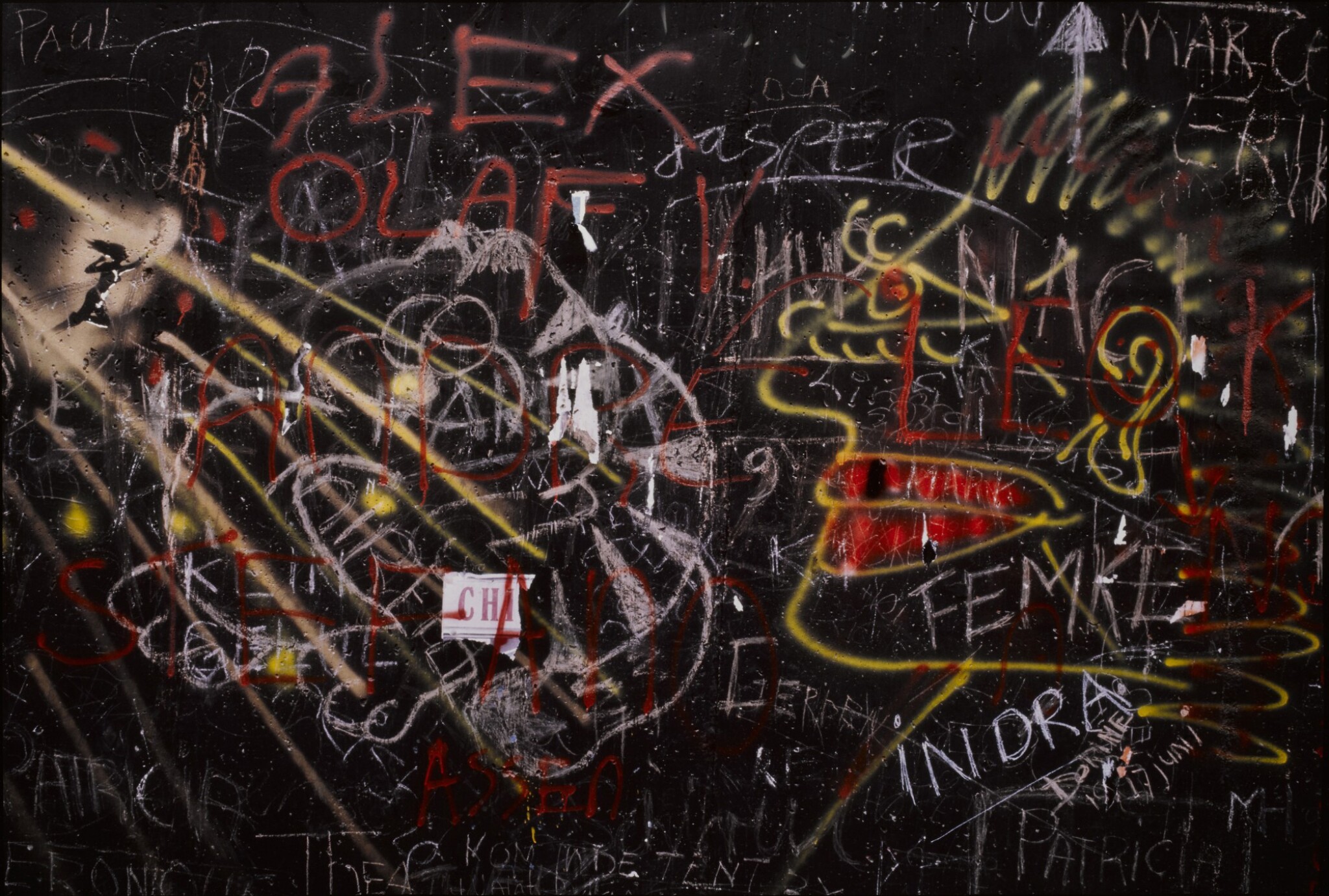 Please note the colors and shades in the online catalogue illustration may vary depending on screen settings. This large Cibachrome print is in generally very good condition. The colors appear bright and saturated with no signs of fading. The lower right margin edge is cockled. There are occasional fingerprints in the black margins and insignificant soiling on the reverse.

Leland Rice, a self-described ‘visual archeologist,’ began photographing the Berlin Wall in 1983, returning each year to document its ever-evolving surface of imagery and text until its fall in November 1989. The artist commented:

‘Accumulated over many years, countless graffiti had turned the Wall into a semantic playground full of forceful messages. I gradually realized that I no longer could relate to the Wall as just a physically tangible medieval barrier symbolizing the ideological division of Europe. Certainly the Wall did exist for divisive reasons, but now it took on another purpose for me - that of a creative catalyst. And, since walls had long been a primary subject of my work as an artist, I felt deeply compelled to photograph it.’ (Leland Rice, as quoted in Up Against It: Photographs of the Berlin Wall, p. 114)

Indeed, photographing walls in various forms had been a particular focus for Rice. In the mid-1970s, he repeatedly photographed vacant interiors, which he titled Wall Sites. By the late 1970s he documented the walls in painters’ studios where the traces and run-offs from canvases accumulated.

Rice’s Berlin Wall photographs capture the transitory mash-ups of texts, poetry, pictograms, and expletives that we now read as a visual archive of the Cold War era. In the sliver of wall shown in the present work, Rice recorded a roster of names (Alex, Olaf, Femke, Jasper, and Indra, among others); a profile of a face drawn with yellow spray paint and finished with menacing red teeth; a Cheshire-like cat sketched in white chalk; and a stenciled figure of a runner carrying a torch. Other images and text are completely obscured by the layers drawn on top of them, a palimpsest that cannot be unraveled.

Rice’s work is in the collections of the San Francisco Museum of Modern Art; the J. Paul Getty Museum, Los Angeles; the Art Institute Chicago; the Los Angeles County Museum of Art; the Smithsonian American Art Museum; and the Museum of Contemporary Art, Los Angeles.