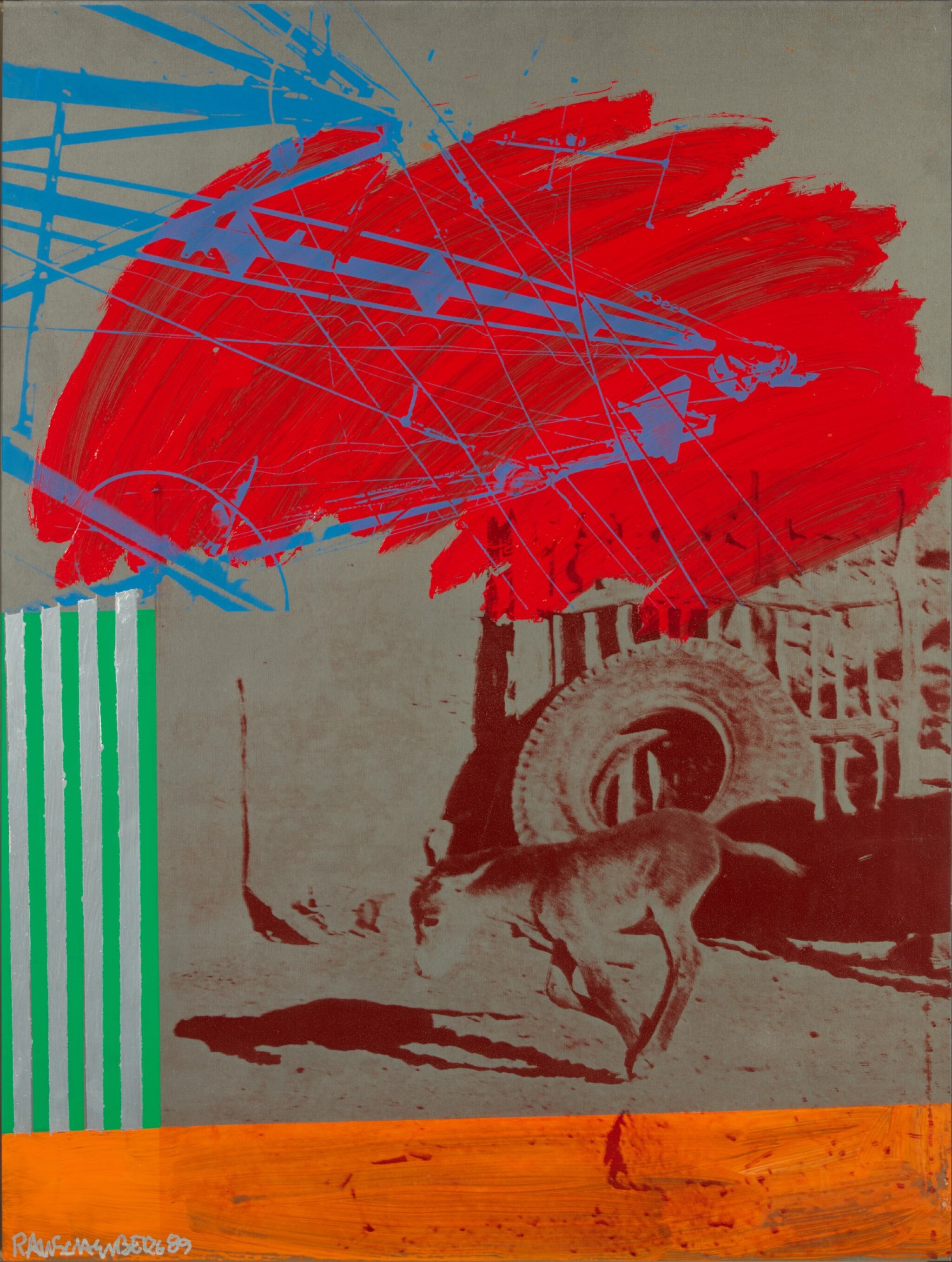 This work is in very good condition overall. There are tonal and textural variations to the surface, including scattered areas of stray media, inherent to the artist's working method and chosen media. There is a fine layer of surface dust present, visible upon close inspection. There are scattered areas of minute pinpoint accretions, visible upon close inspection. Framed without glazing.

Private Collection (gift of the artist)

Acquired from the above by the present owner in 2002

“[Art should be] an affirmation of life – not an attempt to bring order out of chaos nor to suggest improvements in creation, but simply to wake up to the very life we’re living.”[1] – John Cage

In the late 1980s, Robert Rauschenberg finally returned to the silkscreen, a medium that he had not used since his seminal Silkscreen Paintings of the 1960s. Executed in 1989, Untitled belongs to Rauschenberg’s Galvanic Suite (1988-1991) whose name comes from Rauschenberg’s decision to work on galvanized steel. Unlike the Silkscreen Paintings of the ‘60s, in this series, Rauschenberg uses his own photography instead of appropriated images for the silkscreens. However, Rauschenberg’s signature juxtaposition of diverse, mechanically reproduced imagery and gestural brushwork places Untitled squarely within his singular oeuvre. Rauschenberg explains, “My fascination with images … is based on the complex interlocking of disparate visual facts … that have no respect for grammar.”[2] In this way, Rauschenberg forces the viewer to hazard a reading of the unreadable – of extreme and often mystifying combinations of imagery.

Rauschenberg, who always preserves an unreconcilable ambiguity in his works, believes in the fundamental importance of the viewer’s act of looking. In Untitled, interpretations might range from the threat of modernity to the role of art, but it remains the viewer’s responsibility to decide the meaning of this work. The work of art, for Rauschenberg, is always in flux, evolving with its viewer, whose interpretations continuously renew it. Rauschenberg argues that “Painting relates to both art and life. Neither can be made. (I try to act in that gap between the two.)”[3] Rauschenberg, who famously worked with his TV blaring, reflects life as it exists back at the viewer in a way that mirrors the non-stop bombardment of media images. In Untitled, we see the world in its fragmentation and with its absurd contradictions. A young donkey, frozen in motion beneath a looming satellite tower, charges ahead at a wall of green and silver stripes that seems to have wandered out of one of Daniel Buren’s minimalist frescoes. The collision of these disparate elements defamiliarizes the world. As Rauschenberg’s long-time friend John Cage says, this jarring synthesis of imagery rouses us from our slumber. In this moment frozen in time, it is up to the viewer to draw a conclusion.