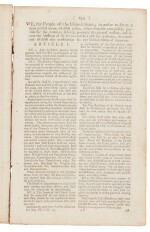 Periodical appearance in The Columbian Magazine for September, 1787.Philadelphia: Printed for Seddon, Spotswood, Cist, and Trenchard, 1787

One of two of the earliest magazine printings of the United States Constitution. Another periodical, Matthew Carey's American Museum, also printed the Constitution in its September issue. The Columbian Magazine was probably issued within a week of the broadside printing. The Constitutional Convention ratified the final draft on Monday, 17 September 1787. Dunlap and Claypoole, the official printers for the Convention, issued the broadside version the next day, and on 19 September they printed it in their newspaper, The Pennsylvania Packet.

According to Mott, it was apparently common practice for monthly periodicals to issue their publications by the last week of every month. The present magazine was probably printed late in the week of the 17th, and the final signature containing the Constitution and recent news was probably printed on Saturday, 22 September. This is the last internal date printed in the second paragraph on the last page and refers to an incident that occurred on "Monday last," i.e., the 17th. The periodical most likely was ready for distribution and sale on Monday, 24 September.