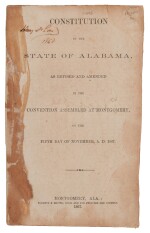 The Constitution of the State of Alabama, as Revised and Amended by the Convention Assembled at Montgomery on the Fifth Day of November, A. D. 1867. Montgomery: Barrett & Brown, 1867

The Reconstruction Constitution of 1867. "[T]he constitution granted suffrage to 'every male person,' with the right of suffrage to be protected by laws. It also declared that all men are created equal and that 'no form of slavery shall exist in this state.' This ensured that African American men would have the right to vote in Alabama—a noteworthy development in a nation still bitterly divided on the question. Although nearly all white Northerners supported abolishing slavery, some expressed misgivings about the degree of equality for African Americans implied by the Fourteenth Amendment" (Colonists, Citizens, Constitutions, p. 168).

Additionally it stipulates that "this State has no right to sever its relations to the Federal Union." The document additionally delineates the boundaries of Alabama, describes the powers of the executive, legislative, and judicial branches as well as the structure of its state militia and educational system.