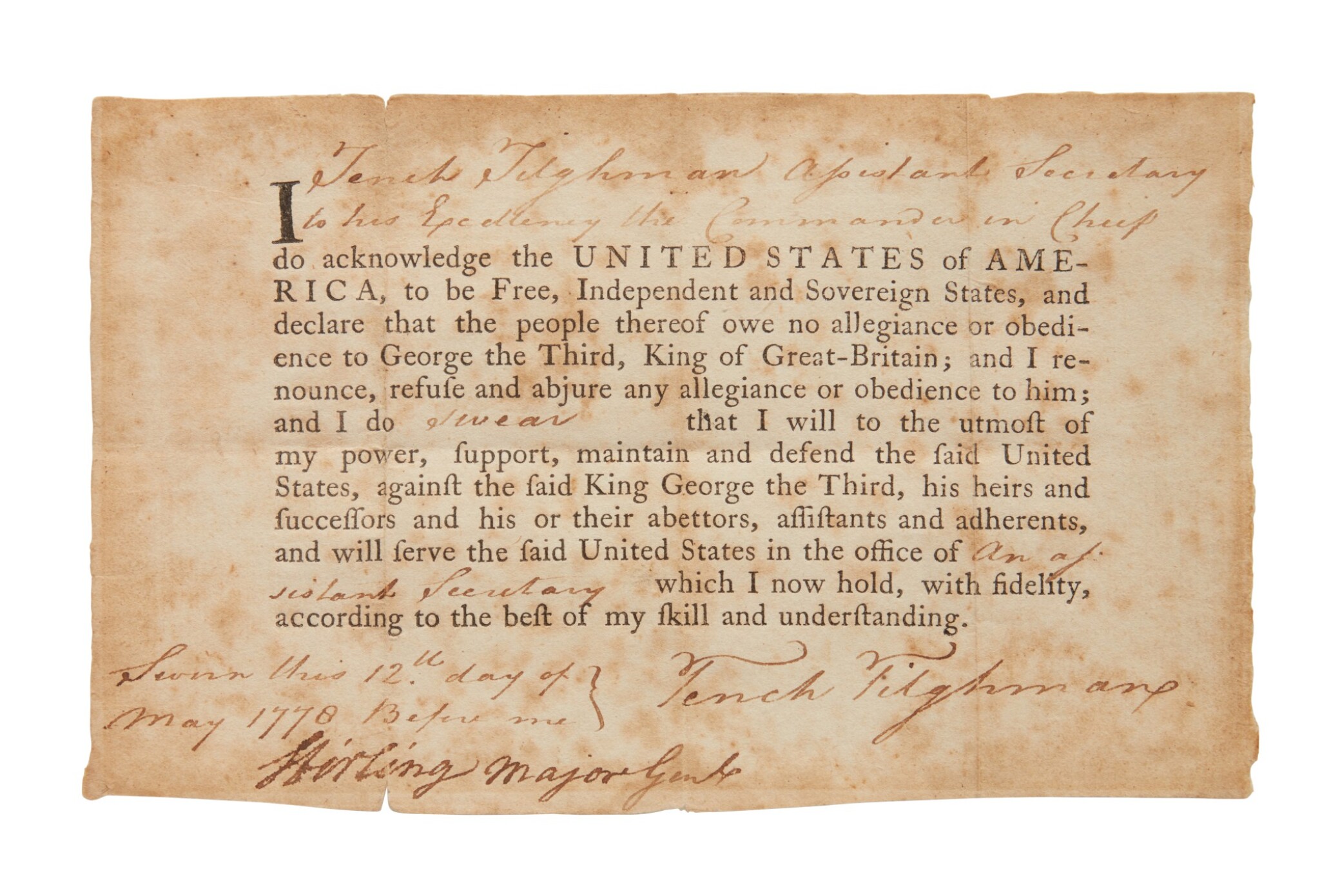 After the Continental Army’s brutal encampment at Valley Forge, Tench Tilghman swears his allegiance to the United States

"I Tench Tilghman Assistant Secretary to his Excellency the Commander in Chief do acknowledge the United States of America, to be Free, Independent and Sovereign States. …"

Tench Tilghman was an aide-de-camp to George Washington and one of the commander's principal advisors. He has been identified by Arthur Lefkowitz—together with Alexander Hamilton and Robert Hanson Harrison—as one of "a brilliant cadre" of three among the General's aides (George Washington's Indispensable Men: The 32 Aides-de-Camp Who Helped Win American Independence, 2003).

On 3 February 1778, the Continental Congress prescribed an oath of allegiance for both civil and military officers serving the patriot cause. Because the oaths were somewhat controversial, and because of a shortage of the printed forms, Washington delayed the administration of the oath to his men until his General Orders of 7 May 1778. On that day, near the end of the Continental Army’s brutal winter encampment at Valley Forge, 206 officers signed the oath, which was in effect also a pledge of non-allegiance to George III. Among those officers was Tench Tilghman:

"I Tench Tilghman Assistant Secretary to his Excellency the Commander in Chief do acknowledge the United States of America, to be Free, Independent and Sovereign States, and declare that the people thereof owe no allegiance or obedience to George the Third, King of Great-Britain; and I renounce, refuse and abjure any allegiance or obedience to him; and I do swear that I will to the utmost of my power, support, maintain and defend the said United States, against the said King George the Third, his heirs and successors and his or their abettors, assistants and adherents, and will serve the said United States in the office of An assistant Secretary which I now hold, with fidelity, according to the best of my skill and understanding."

Tilghman's allegiance oath was witnessed and recorded by Major General William Alexander. Alexander also styled himself Lord Stirling, although his claim to the Scottish title of Earl of Stirling (initially upheld by a Scottish Court) was denied by the House of Lords. Nonetheless, Alexander—who administered Washington's own oath on this same morning—was addressed by everyone in camp, including Washington and Tilghman, as "My Lord."