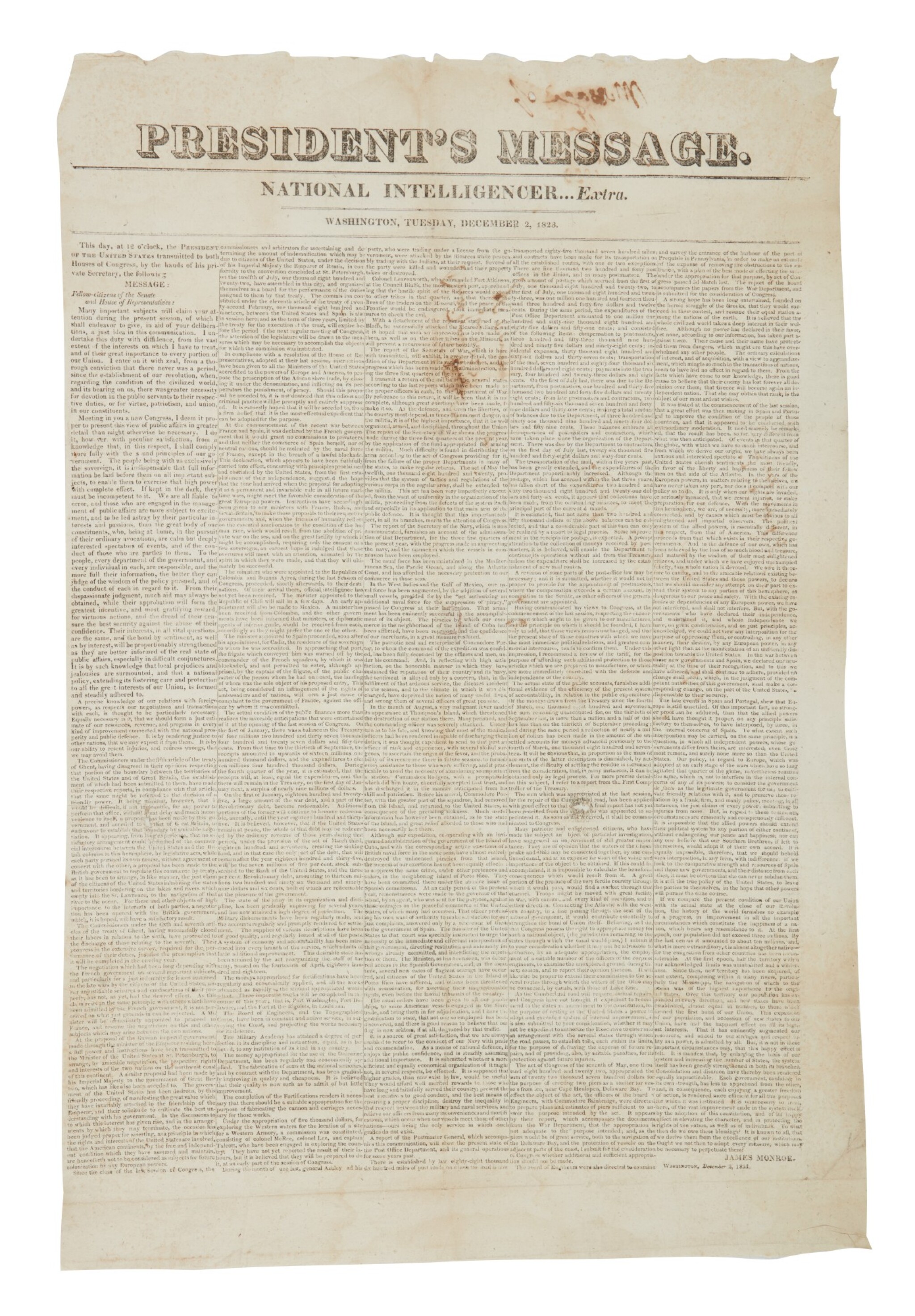 Broadside newspaper extra on a full sheet of wove paper, unwatermarked (562 x 373 mm, preserving deckle on three edges). Text in 5 columns separated by thin rules, 3 headlines, creased where folded to sent in the mails, with address panel, remnant of wax seal, and dockets ("Message of the President 1823"; "Presidents Message For 1823 Js. Monroe") on verso; some tiny losses at intersecting folds, a few other short fold separations or small spots of ink erosion, some light scattered soiling. Half red morocco slipcase, chemise.

First printing of the Monroe Doctrine, one of the most important of American state papers and the guiding principle of United States diplomacy in the Western Hemisphere since its promulgation.

The fear that the continental powers were planning to reconquer the Latin American republics that had declared their independence from Spain—coupled with irritation over Russia's intention to quarantine the Northwest coast of America from all but Russian vessels—led President Monroe to articulate a policy (largely drafted by Secretary of State John Quincy Adams) that would obligate the European powers to respect the Western Hemisphere as the United States' sphere of influence and prevent their intervention in the New World. His eponymous doctrine boldly declared that "the American continents, by the free and independent condition which they have assumed and maintained, are henceforth not to be considered as subjects for further colonization by any European powers," and that any subsequent European meddling in the Americas could not be viewed "in any other light than as the manifestation of an unfriendly disposition towards the United States."

The fifteen-page Government Printing Office pamphlet of the Monroe Doctrine was assumed to have precedence as the earliest appearance of the text, until the Thomas Streeter copy of the present broadside extra of the National Intelligencer appeared at auction in 1967. The Intelligencer was founded in 1810, and shortly after the War of 1812 it became the de facto (and, on occasion, the official) administration organ and congressional printer, a position it maintained until Andrew Jackson succeeded John Quincy Adams in the White House.

Very rare. Only five or six copies seem to be known and only one has been sold at auction for a quarter century. One of the surviving copies differs from the others in several points: the second headline, "National Intelligencer … Extra," is set in much larger type; a paragraph in the third column has been reset; and there are a few differences in capitalization and other settings. No priority can be established between the two issues, which were likely printed concurrently on separate presses in the newspaper's offices. At least two of the other copies (Streeter, which was resold by us in the Stanley Paul Sax auction, 17 January 1998, lot 187; and another copy sold by us 13 December 1995, lot 280) are either badly stained or worn with some loss of text. The present copy is darkly printed and beautifully preserved. The text of the Monroe Doctrine did not appear in the National Intelligencer proper until the issue of 4 December.

The Goldman Monroe Doctrine is a uniquely intriguing copy, having been mailed by Moses Hayden, a U.S. Representative from New York, to a constituent, Jonathan H. Jones of Lewiston, New York. Hayden, who served in Congress from 1823 to 1827, has added his franking signature to the address panel on the verso of the broadside.