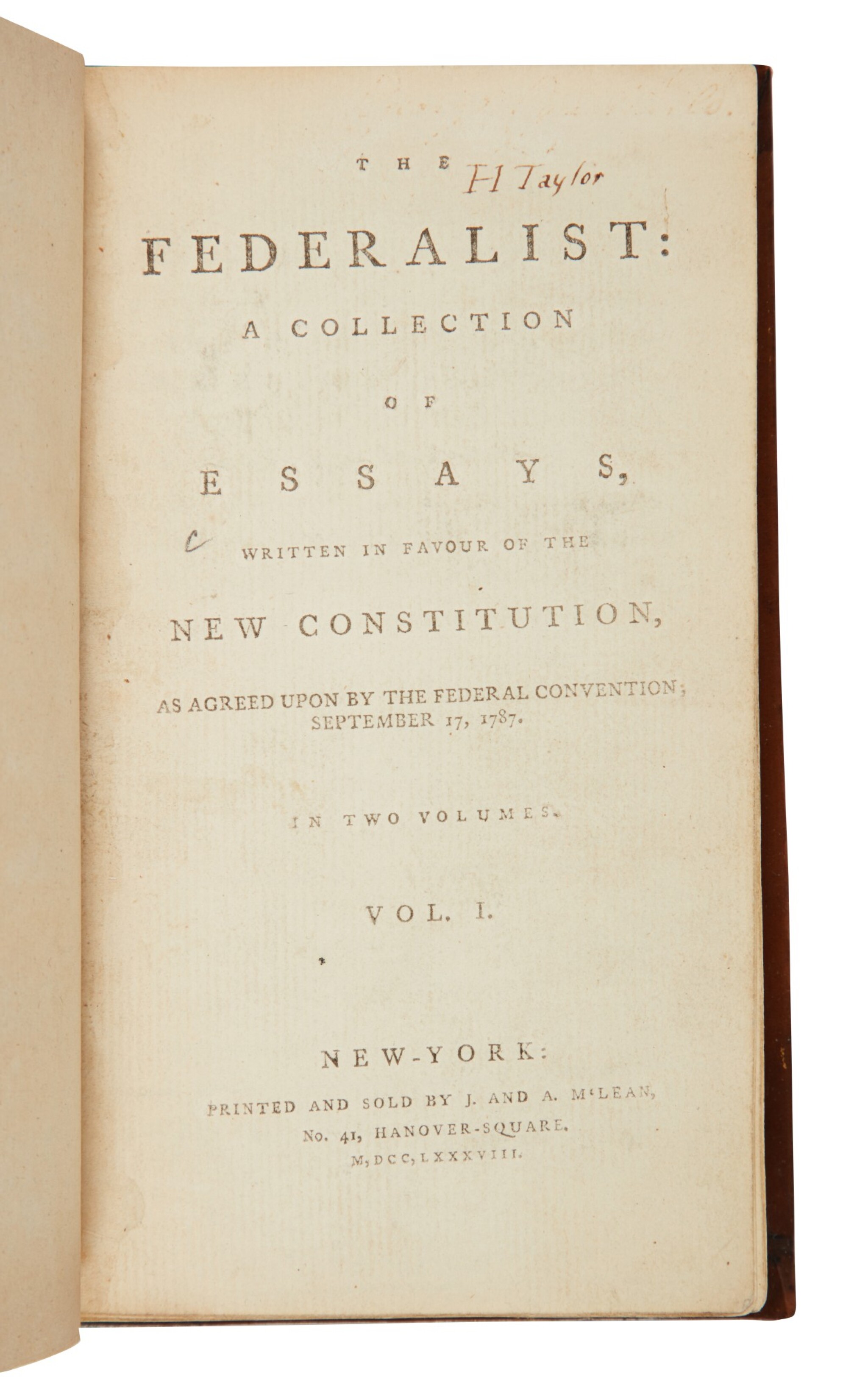 The Federalist. A Collection of Essays, Written in Favour of the New Constitution, as Agreed upon by the Federal Convention, September 17, 1787. New York: Printed and Sold by J[ohn]. and A[ndrew]. M'Lean, 1788

2 volumes in one, 12mo (168 x 100 mm, vol. 1 slightly smaller). Lacking initial blanks, very occasional light browning and foxing but an unusually clean set, vol. 1 with a few scattered pencil annotations by a hand that has also indicated authorship by the letters H, M, and J. Volume 2 is bound in contemporary tree calf, the covers with a gilt-tooled border; rubbed, rebacked preserving most of the original spine with red and black morocco labels. Volume 1 is bound in retrospective tree calf to a very fine match with vol. 2.

First edition, from the scarce thick-paper issue. "A classic exposition of the principles of republican government" (Bernstein). Written as expedient political propaganda for the purpose of supporting New York's ratification of the Federal Constitution, the essays in The Federalist are now recognized as one of America's most important contributions to political theory. Alexander Hamilton was the principal force behind the entry of "Publius" (the pen name shared by all three authors) into the ratification pamphlet wars, but he enlisted Virginian James Madison and fellow New Yorker John Jay as collaborators. Each was assigned an area corresponding to his expertise. Jay naturally assumed responsibility for foreign relations. Madison, knowledgeable in the history of republics and confederacies, wrote on those topics. Having drafted the Virginia Plan, it also fell to him to outline the structure of the new government. Hamilton took on those branches of government most congenial to him: the executive and the judiciary; and he also covered military matters and taxation.

At the time of the writing of the essays, Hamilton and Madison "were so close in style and outlook that scholars find it hard to sort out their separate contributions" (Chernow, Alexander Hamilton, p. 251). The Library of Congress attributes with certainty fifty-one essays to Hamilton, fifteen to Madison, and five to Jay, three to Hamilton and Madison together, and nine as being written by either Hamilton or Madison. The first thirty-six Federalist papers were collected and published by the M'Lean brothers in March 1788, and the final forty-nine—together with the text of the Constitution, a roster of its signers, and the resolution submitting it to the consideration of Congress—followed in a second volume two months later. In fact, the final eight essays were printed in book form before they appeared serially in newspapers.

George Washington, who would shortly chair the Constitutional Convention, praised the collection of essays in a letter to Hamilton, 28 August 1788: "As the perusal of the political papers under the signature of Publius has afforded me great satisfaction, I shall certainly consider them as claiming a most distinguished place in my library. I have read every performance which has been printed on one side and the other of the great question lately agitated (so far as I have been able to obtain them) and, without an unmeaning compliment, I will say that I have seen no other so well calculated (in my judgment) to produce conviction on an unbiassed mind, as the Production of your Triumvirate. When the transient circumstances & fugitive performances which attended this crisis shall have disappeared, that work will merit the notice of Posterity; because in it are candidly discussed the principles of freedom & the topics of government, which will be always interesting to mankind so long as they shall be connected in Civil Society" (Papers, Confederation Series, ed. Abbot, 6:480–482).

In 1825 Thomas Jefferson urged the adoption of The Federalist as a required text at the University of Virginia, describing it as "an authority to which appeal is habitually made by all … as evidence of the general opinion of those who framed, and of those who accepted the Constitution of the United States, on questions as to its genuine meaning." The significance of the work remains unchallenged: constitutional scholar Michael I. Meyerson wrote in his study that "The Federalist not only serves as the single most important resource for interpreting the constitution, it provides a wise and sophisticated explanation of the uses and abuses of governmental power from Washington to Baghdad" (Liberty's Blueprint: How Madison and Hamilton Wrote the Federalist Papers, Defined the Constitution, and Made Democracy Safe for the World, 2008, p. ix).

Copies were issued on both regular paper and a heavier "thick" paper—the latter being intended principally for presentation.