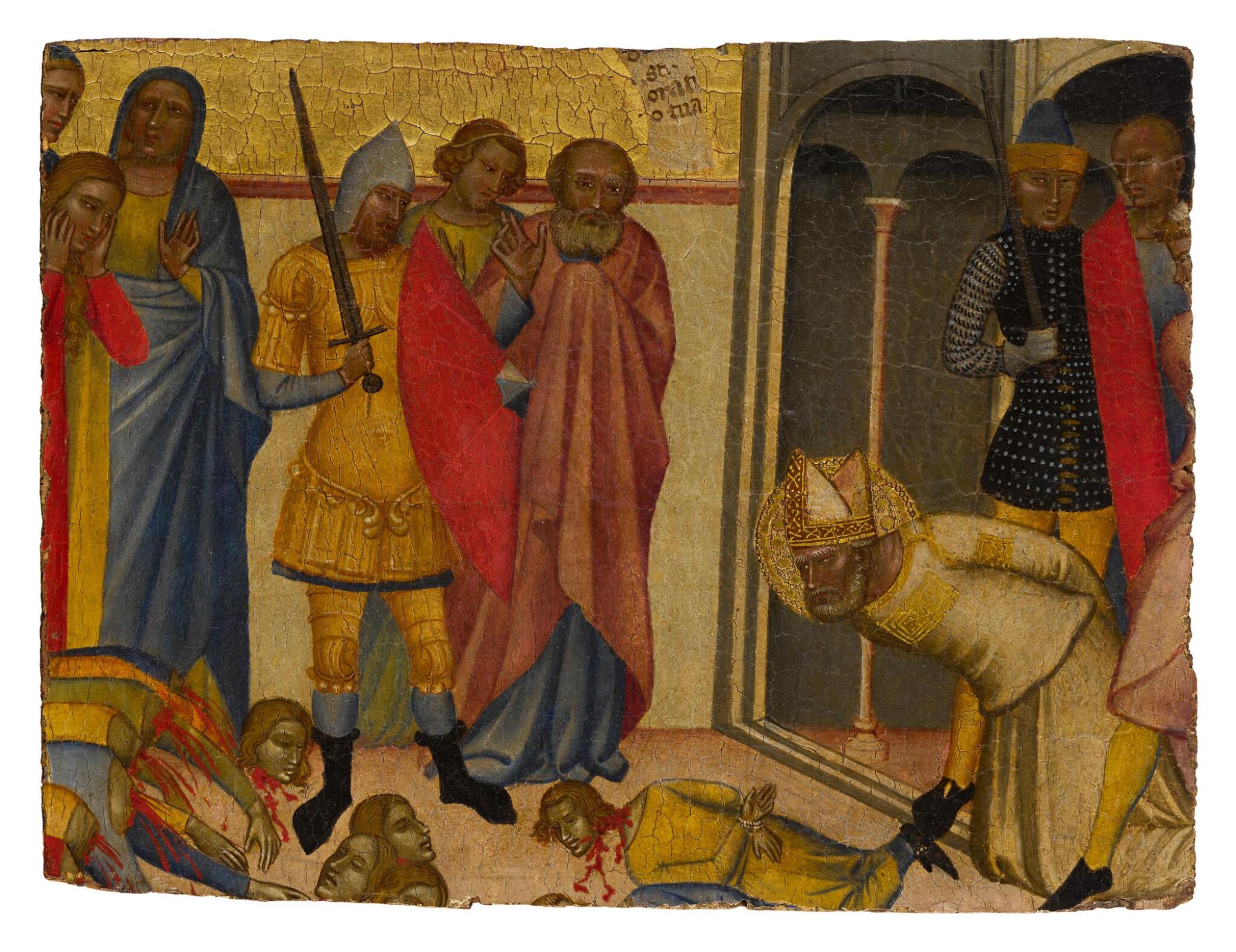 This Martyrdom of Saint Blaise is one of three scenes from the life of the saint, parts of a predella for an as yet unidentified altarpiece by Allegretto Nuzi likely painted after his return from Florence to his native Fabriano. The other surviving elements from the predella, the Arrest of Saint Blaise and a Saint Blaise imprisoned and beaten with iron rods, were together in with the dealer Lorenzelli, Bergamo in 1950, and are now in the Alana Collection.1

﻿When the present panel was in the collection of Fritz Bamberger, Bernard Berenson recognized its authorship, if not the exact episode depicted. The two other panels were published by George Kaftal in 1952, who reported that Roberto Longhi had given them to Nuzi. In 2003, Everett Fahy was the first to connect the three panels when the Alana paintings appeared at auction. It is likely that there may have been other episodes from the saint’s life as part of the predella, including his torture with iron wool carders, the travail which provided his most recognizable iconographic attribute. In her discussion of the Alana panels, Ada Labriola notes that no likely candidate for the final altarpiece, likely a polyptych, can be suggested. The veneration of Saint Blaise was popular in Fabriano and the Marches, and there were likely a number of churches dedicated to him in and around the town which could have required an altarpiece.2 She dates this group to circa 1350-55, on the basis of the still-strong influence of Florentine painting. Allegretto was documented in Florence in 1346, where he spent time in the studios of Bernardo Daddi and Puccio di Simone. This dating is also supported by Laurence Kanter, who observes that by 1360, Nuzi’s pictorial style begins to shift to a more obvious interest in decorative patterning and geometric composition. In a private communication, Matteo Mazzalupi has tentatively suggested a date of the 1360s, noting that the distinctively shaped red shield held by the soldier at the center of the composition is similar to a more elaborately realized one held by Saint Michael in a triptych painted for San Domenico, Fabriano, which is dated 1365 (now Pinacoteca Vaticana, Rome, inv. 40204).

1.  The two Alana panels were sold together on 9 July 2003, lot 80, at Christie’s London. The Saint Blaise imprisoned and beaten with Iron Rods is in damaged state.

2. There was an important Benedictine Abbey of San Biagio in Caprile in Campodonico (south of Fabriano) as well as a church dedicated to him in Fabriano itself. See A. Labriola 2009, p. 15, note 4.