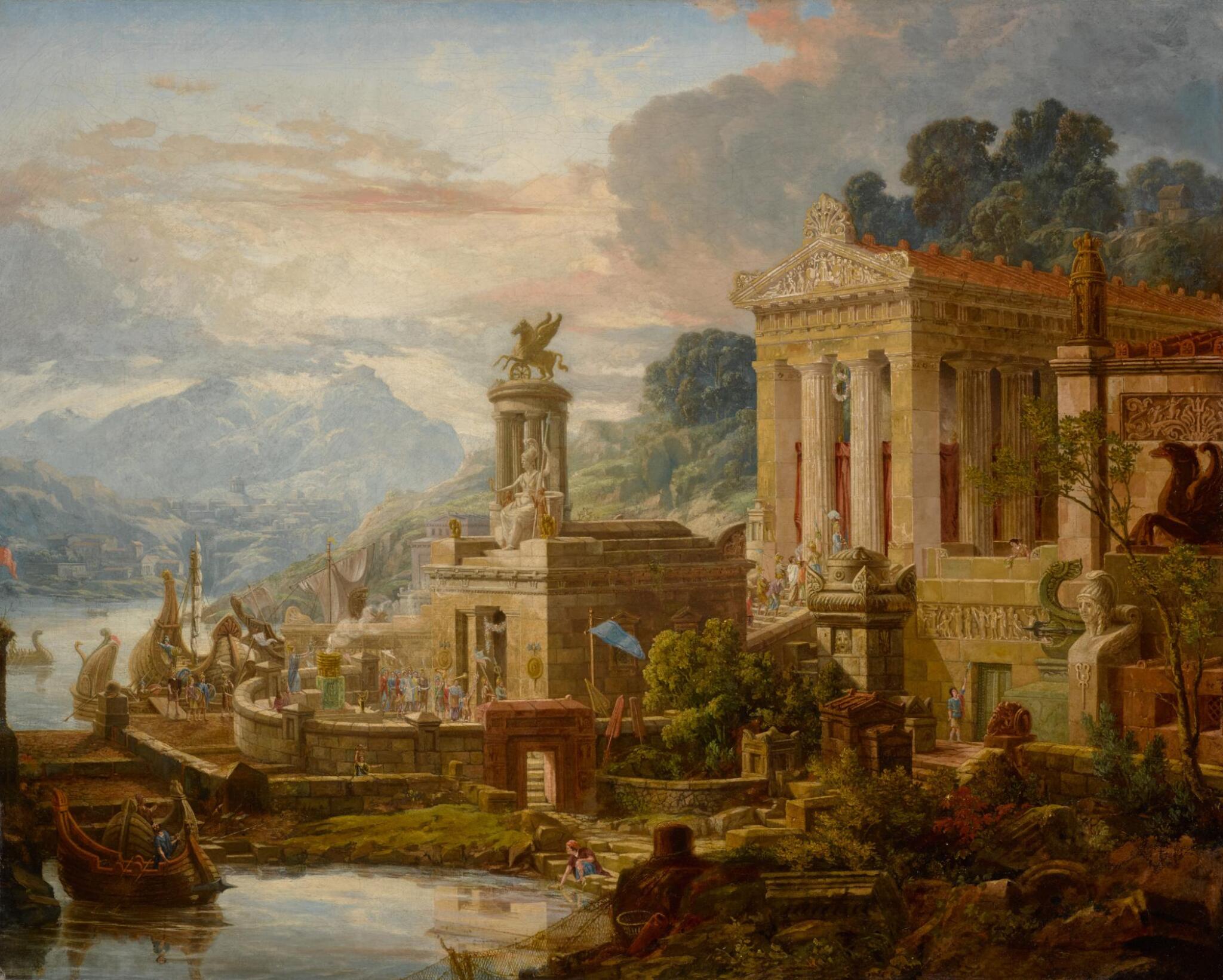 The canvas is lined and stable on its stretcher. The overall image reads well under a clear, shiny varnish. There are no visible signs of previous restoration visible to the naked eye. Frame abrasion is present along the lower left and bottom edges. Under UV inspection, several campaigns of restoration can be seen, for example, in the upper right quadrant of the sky strokes of retouching fluoresce in a diagonal most likely to amend a tear. Further inpainting exists in the upper left quadrant of the sky. The buildings and figures are in good condition with no signs of previous restoration. The painting can be hung in its current state. Offered in a giltwood frame.
In response to your inquiry, we are pleased to provide you with a general report of the condition of the property described above. Since we are not professional conservators or restorers, we urge you to consult with a restorer or conservator of your choice who will be better able to provide a detailed, professional report. Prospective buyers should inspect each lot to satisfy themselves as to condition and must understand that any statement made by Sotheby's is merely a subjective qualified opinion.
NOTWITHSTANDING THIS REPORT OR ANY DISCUSSIONS CONCERNING CONDITION OF A LOT, ALL LOTS ARE OFFERED AND SOLD "AS IS" IN ACCORDANCE WITH THE CONDITIONS OF SALE PRINTED IN THE CATALOGUE.
Probably, George Augustus Wallis, Heidelberg, University of Düsseldorf;
Anonymous sale, Vienna, Dorotheum, 9 March 1993, lot 152;
There acquired by Richard L. Feigen.

Robert Wallis for The Amulet, or Christian and Literary Rembrancer, London, 1826.

This painting is one of Joseph Michael Gandy's grandest imaginary reconstructions of a classical cityscape. The artist's preferred medium was watercolor, and this painting is one of his rare works in oil on canvas. The only other comparable example in both scale and subject is now in The Ray and Diana Harryhausen Foundation.1 In both instances, Gandy illustrates extraordinary deftness at rendering spatial complexity and the use of small figural vignettes.

Working in the first part of the 19th century, Gandy is often compared to J.M.W. Turner by contemporary critics because his landscapes call to mind the sublime and reflect the Romantic movement. He found creative refuge in painting architectural fantasies which evoked dreamlike compositions of ancient sites through archaeological accuracy and sheer poetic invention.

The present picture was engraved, with some minor changes, as "The Temple of Victory" in a literary annual called The Amulet in 1826. A smaller autograph version of the composition, executed in watercolor, is preserved in the Victoria and Albert Museum, London.2