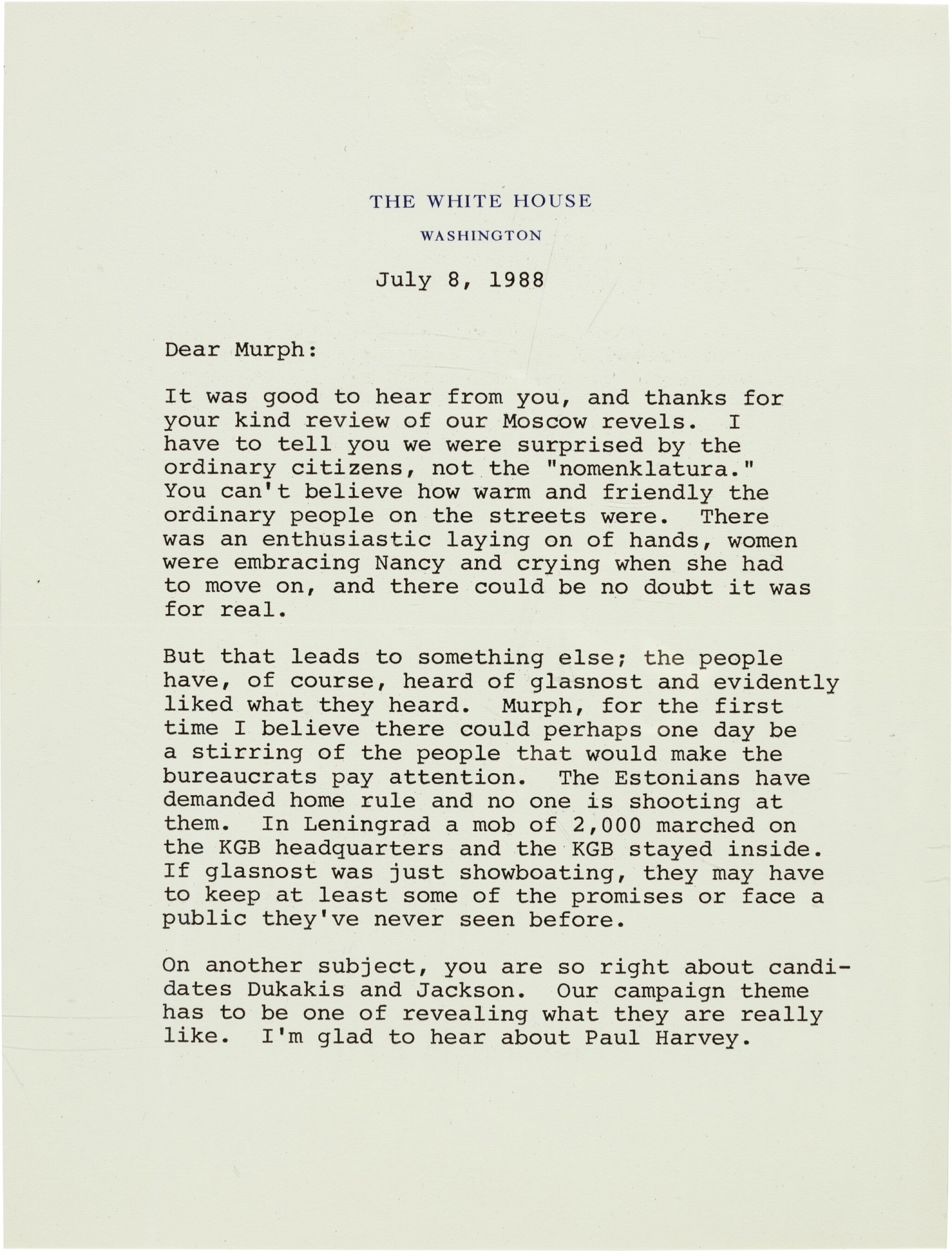 two autograph, the remainder typed, four signed with autopen, a revealing political correspondence to a long-standing friend and trusted ally, the vast majority written during his two presidential terms, touching on subjects ranging from Carter's mishandling of the Iranian hostage crisis to glasnost and the changes in the Soviet Union, as well as the Iran-Contra affair, Apartheid South Africa, Supreme Court nominations, and the partisan battles of American politics, 39 pages, Sacramento, Los Angeles (various addresses), and the White House, with 30 envelopes, 4 June 1968 to 4 July 1990

REAGAN'S LETTERS TO GEORGE MURPHY, THE FELLOW ACTOR AND REPUBLICAN POLITICIAN HE REFERRED TO AS "MY JOHN THE BAPTIST". George Murphy (1902-92) was the first prominent Hollywood actor to launch a major national political career. The first of these letters dates from 1968 but the relationship between Murphy and Reagan went back to their careers in Hollywood in the early 1940s. Murphy had played Reagan's father in the wartime propaganda musical This is the Army, and the two men had served as successive presidents of the Screen Actors' Guild in the '40s and '50s. Their on-screen personae were very different - Reagan tended to play cowboys and other men of action, Murphy was primarily a song-and-dance man - but they had similar political instincts. Murphy was elected to the US Senate in 1964, two years before Reagan became Governor of California; they supported each other's campaigns in the 1960s and remained close friends and political allies through Reagan's presidency and beyond.

The most significant letters in the current series are undoubtedly Reagan's two letters written after meetings with Gorbachev. In the first, Reagan sums up for his friend the 1985 Geneva Summit, where he had first met the new Soviet leader:

"...it was worthwhile but it would be foolish to believe the leopard will change its spots. He is a firm believer in their system... and he believes the propaganda they peddle about us. At the same time, he is practical and knows his economy is a basket case. I think our job is to show him he and they will be better off if we make some practical agreement, without attempting to convert him to our way of thinking..." (19 December 1985)

Three years later, in the aftermath of the Moscow Summit, Reagan had a clear understanding of the world-changing significance of the reforms within the USSR itself. This came as much from his evident astonishment at the warmth of his public reception in Moscow as from his meetings with the Soviet leadership:

"...the people have, of course, heard of glasnost and evidently liked what they heard. Murph, for the first time I believe there could perhaps one day be a stirring of the people that would make the bureaucrats pay attention. The Estonians have demanded home rule and no one is shooting at them. In Leningrad a mob of 2,000 marched on the KGB headquarters and the KGB just stayed inside. If glasnost was just showboating, they may have to keep at least some of the promises or face a public they've never seen before..." (8 July 1988)

Whilst these letters are exceptional examples of Reagan as a clear-eyed statesman, taken as a whole the correspondence provides a narrative of a presidential career from its origins to its conclusion. In the earliest letters Reagan is Governor of California, but by June 1976 he is "busy job-hunting" having failed to secure the Republican Presidential nomination. In his letters from 1979 and 1980 Reagan assures Murphy of his careful preparation for the nomination, sizes up his opponents for the Republican ticket, and expresses his contempt for the Carter administration ("...Things don't get any better do they? As witness the bungled attempt in Iran...", 2 May 1980).

Reagan engages with relish in the familiar cut and thrust of American partisan politics in his letters to Murphy. These are letters that reveal Reagan the politician, whether he is admitting to the political weakness of his ambitious tax policies ("...There is no question but that we're vulnerable on that one. They've done quite a job on me as 'favouring the rich' in our tax policies...", 14 February 1983), or expressing his satisfaction on the 1984 Republican convention that preceded his landslide victory that November ("We're just back from the convention and all in all think it was darn good. The press, of course, isn't happy--no blood on the floor...", 27 August 1984). He is comfortable taking direct aim at his enemies: Bobby Kennedy is "the playboy from Massachusetts" (11 August 1986), "the Mondale" is "lying through his teeth" on Social Security (10 September 1984), whilst the veteran Florida senator Claude Pepper, "Old Red Pepper", is mentioned in several letters. Murphy had retired to Florida and made Pepper a personal target, much encouraged by Reagan: "He's really a storm trooper and has done quite a hatchet job for almost 2 years now. He has quite a lot of our generation believing I eat my young..." (27 February 1984). Surveying the Democrat hopefuls in 1988 he singles out Jesse Jackson for criticism ("...Presidential candidate Jackson has reversed himself from clergyman on the issue of abortion. He once called it baby-killing; now he's all for it..." 23 May 1988).

Like many other American conservatives before and since, Reagan was deeply frustrated at what he believed to be liberal media bias, complaining in one letter of the "daily poison of the New York Times and Washington Post" and recommending a new book by conservative author William Rusher "that documents with names, titles and dates how the media has been taken over and delivers the news in the framework of their bias. This is also true of the newsrooms of TV" (23 May 1988). Another familiar story is his determination to secure a strong conservative presence on the Supreme Court and the resulting clash with political opponents in Congress; having already had one nominee struck down, Reagan writes as he is about to nominate Douglas Ginsburg to the vacant seat ("...I promise you he'll be as conservative as Judge Bork...There is no way I'll go for a touch of liberalism to win over the lynch mob...", 29 October 1987).

Reagan touches on the Iran-Contra affair in several letters from the final years of his presidency. He shows absolute confidence in his position, dismisses press furore as manufactured outrage ("...This whole fuss today is mind boggling..."), and Congress investigation as transparently partisan and doomed to fail ("...Well, so far they haven't gotten the noose around my neck, and they won't because I've been telling the truth these last eight months...", 21 July 1987). He also agrees with Murphy in opposing sanctions against Apartheid South Africa, claiming that "I have some recent figures on Black resistance to punitive sanctions. The majority are well aware they would be the first to suffer, and many of their leaders flatly declare that the radicals who do want them want them because of the chaos they would bring" (11 August 1986). There are only letters dating from after Reagan's departure from the White House and in one - the only handwritten letter in the series - he returns to where he and Murphy began, the Screen Actors Guild, lamenting that it had not acted as a bulwark against the cultural changes that had swept Hollywood: "if it was what it used to be the Guild members would refuse to read lines with 4 letter words and profanity. I'm sure we would have ruled out the nudity and sex too" (25 August 1990).

PROBABLY THE MOST SIGNIFICANT AND REVEALING SERIES OF LETTERS BY REAGAN AS PRESIDENT EVER TO HAVE BEEN OFFERED AT AUCTION.