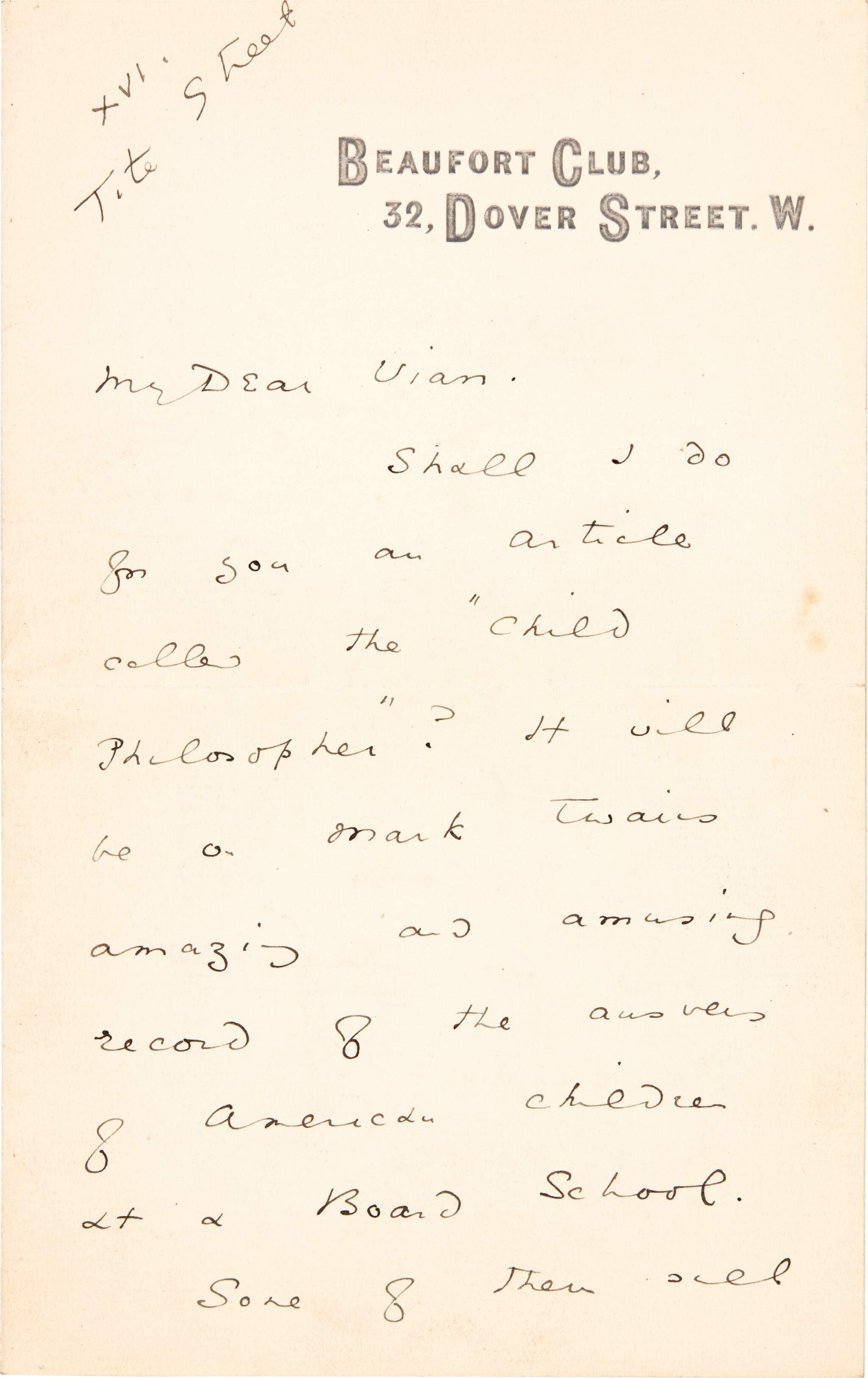 writing to the editor of the Court and Society Review about his submissions to the journal, including play reviews and articles, also making arrangements to dine ("...afterwards we will go smoke cigarettes and talk over the Journalistic article. Could we go to your rooms, I am so far off, and clubs are difficult to talk in...") one letter complaining about a society piece by Lady Colin Campbell in the Court and Society Review about an opening at the Grosvenor Gallery ("...How bad the Grosvenor paragraph is! I could have done you a column on it, and it should be done well ... she requires very careful supervision if she is to continue to write particularly as people seem to know that she does so..."), 18 pages, 8vo, with two autograph envelopes, 16 Tite Street and Abbotts Hill, undated but envelopes postmarked 11 April and 9 September 1887

"...Shall I do for you an article called the 'Child Philosopher'? It will be on Mark Twains amazing and amusing record of the answers of American children at a Board School. Some of them such as Republican - 'a sinner mentioned in the Bible', or Democrat - 'a vessel usually filled with beer', are excellent..."

CORRESPONDENCE TO AN EDITOR PROVIDING GLIMPSES OF LIFE AND LETTERS OF AN AESTHETE'S LONDON. Alsager Vian (b.1863) was the young editor of the London weekly Court and Society Review, for which Wilde wrote a number of articles in 1887. He offered Vian submissions across a number of categories, rather than working specifically as a book or drama critic. His contributions to the journal included some of his most charming journalism, such as 'The Child Philosopher' mentioned above and - in the same issue of 20 April 1887 - his review of a biography of Whistler which famously began, "Every great man has his disciples, and it is usually Judas who writes the biography." Since the majority of his contributions to the journal were anonymous, these letters allow for the firm attribution of reviews and other pieces to Wilde. The Grosvenor Gallery, mentioned in one of Wilde's letters, was the foremost gallery for the London avant-garde and the Aesthetic movement from the late 1870s onwards. Part of the building currently houses Sotheby's Book Department.

The public perception of these letters has a curious history. A seemingly minor mistranscription when they were offered at auction in 2010 led to a major misinterpretation of their tone. Wilde closes one letter with a comment on the magazine's distribution: "Even Grosvenor Place does not get the C & S. till Thursday night! This is all wrong, isn't it." The simple transformation of a minuscule was enough to lead headline-writers to conclude that they referred to an illicit assignation: "...Till Thursday night! This is all wrong, isn't it." Although these letters do not provide evidence of a homosexual affair, they are fine examples of Wilde's fluent pen and his activities as a working man of letters.