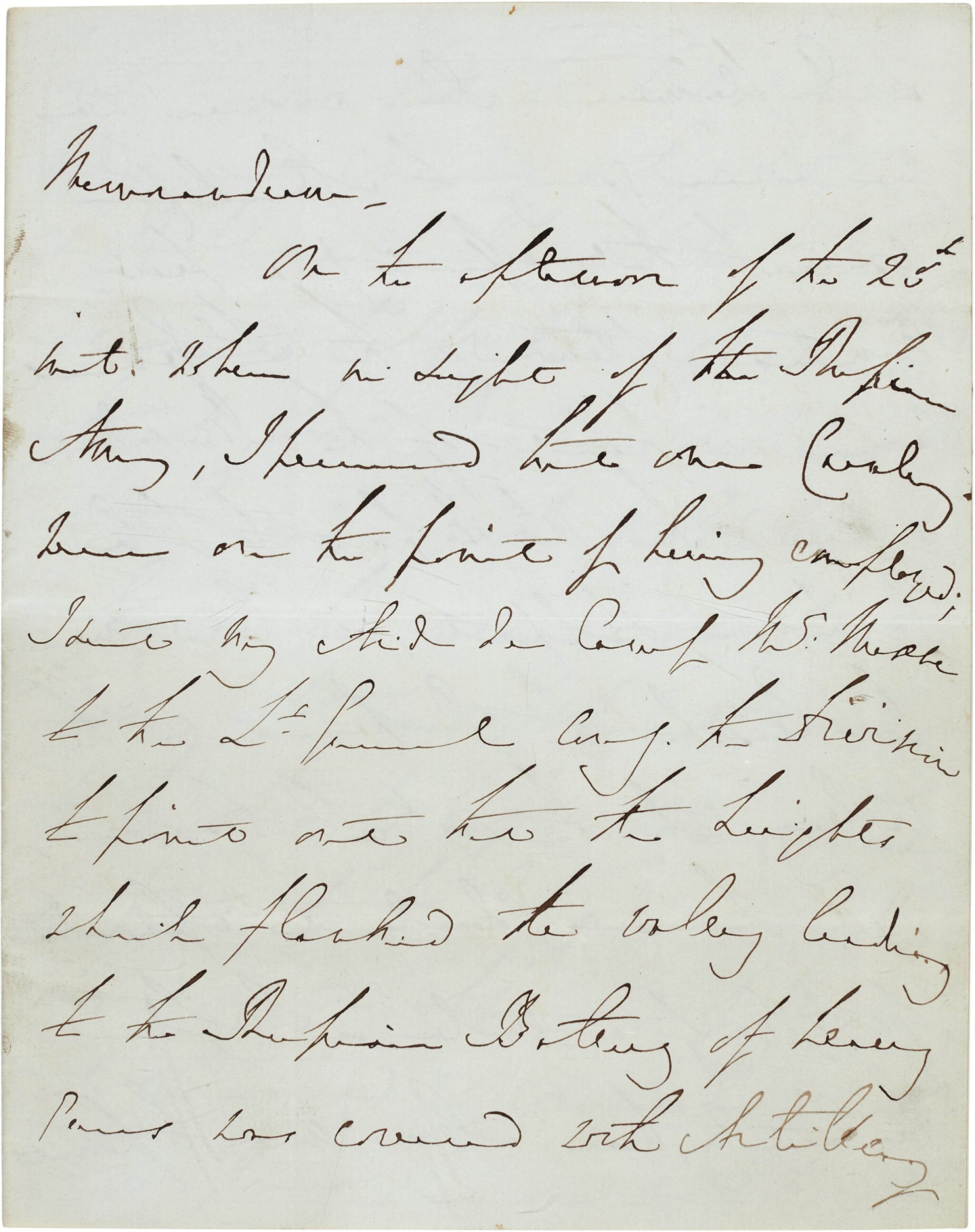 autograph memorandum signed, describing the Charge of the Light Brigade just two days after the event,

"...On the afternoon of the 25th inst: when in sight of the Russian Army [...] the Lt General came in front of the Brigade [...] & told me to attack the Russians in the valley [...] I replied 'Certainly; but allow me to point out to you that the hills on each side are covered with Artillery & Riflemen' The Lt General replied 'I cannot help that, you must attack, Lord Raglan desires the L[igh]t Brigade will instantly attack the enemy - A short time afterwards whilst advancing to the attack, Capn Nolan came in from the Brigade with a view as it appeared of hurrying it on - I had no conversation with the Officr, he did not halt his horse; but a few minutes afterwards a shell burst between him & me, which sent him to the rear & was the cause of his death - I then led the Brigade down the hill in front of the Russian battery of heavy guns firing shells, grape shot & round shot. I led the 13th L[igh]t Dragoons & 17th Lancers straight thro' the Russian guns & we came upon Cossacks & Russian Cavalry in the rear [...] We were exposed all the way to a double flank fire of Riflemen & Artillery & many men & horses fell on the retreat from these flank fires..."

THE COMMANDING OFFICER OF THE LIGHT BRIGADE GIVES HIS ACCOUNT OF ONE OF THE MOST FAMOUS EVENTS IN BRITISH MILITARY HISTORY JUST TWO DAYS AFTER THE CHARGE. Cardigan personally led the charge straight against the main bloc of Russian artillery through the "valley of death", sabre flashing, facing fire on three sides. He reached the Russian guns and overran a battery but was soon forced to retreat back to British lines, braving once again volleys of fire on both flanks. It was an act of exceptional personal bravery, and an action of catastrophic military mismanagement. The action itself was over in an afternoon - Cardigan was back at his yacht in Balaklava harbour in time for dinner and champagne - but its repercussions were to be felt for decades.

In this remarkable memorandum, written just two days after the event, Cardigan makes clear that he knew that the attack was an act of folly. He notes that when he first perceived that he was likely to be ordered to attack he sent his ADC to point out that the surrounding hills were covered with Russian artillery and riflemen, before reiterating the point when the order was given. The Light Brigade was an elite force of some 600 men, lightly armoured and designed for reconnaissance and skirmishing, not for a frontal assault on an embedded enemy of nearly ten times its size. Cardigan is unequivocal that the crucial order came from the divisional commander, Lord Lucan. The two men were brothers-in-law but heartily detested each other and their poor relationship had hampered communication throughout the campaign. It had been Captain Louis Nolan who had transmitted the order from Lord Raglan, the commander in the field, to Lucan, and Cardigan describes how Nolan raced off to the front when the cavalry began their advance but was almost immediately hit by a shell and killed. Nolan perhaps realised that the brigade was aimed at the wrong target and was trying to redirect them but at the time Cardigan was simply furious with him for attempting to seize the honour of leading the brigade in their attack - even though he knew full well that "someone had blundered" and he was leading his men into a bloodbath.

This memorandum stands at the beginning of an argument that has raged for more than 150 years over how the blame should be apportioned between Raglan, Lucan, Cardigan and Nolan. Cardigan sent this memorandum to Lucan and another copy to Raglan (now in the National Army Museum) in order to make his position clear. In later years, as arguments over the Charge grew ever more bitter, Cardigan claimed more and more dubious credit for his role whilst others cast doubt even on his personal heroism, some claiming that he never reached the Russian guns, others remembering the speed of his retreat. This unvarnished memorandum, written in the immediate aftermath of the events, is almost certainly the most honest and raw account by Cardigan of his actions.

It is the quixotic nature of the Charge, courage and prowess of the men of the Light Brigade in the face not only of overwhelming odds but when enacting orders that made no military sense, that has given the Charge such poignancy, certainly since Tennyson published his famous poem in The Times on 9 December 1854. Anyone reading accounts of the Charge would probably come to the conclusion that none of the senior officers deserved to lead the brave men they ordered to their deaths, but Cardigan was at least in the thick of the action. A more intelligent officer would no doubt have tried harder to reason why, but it was Cardigan, riding at the front, who led the six hundred into the valley of death.