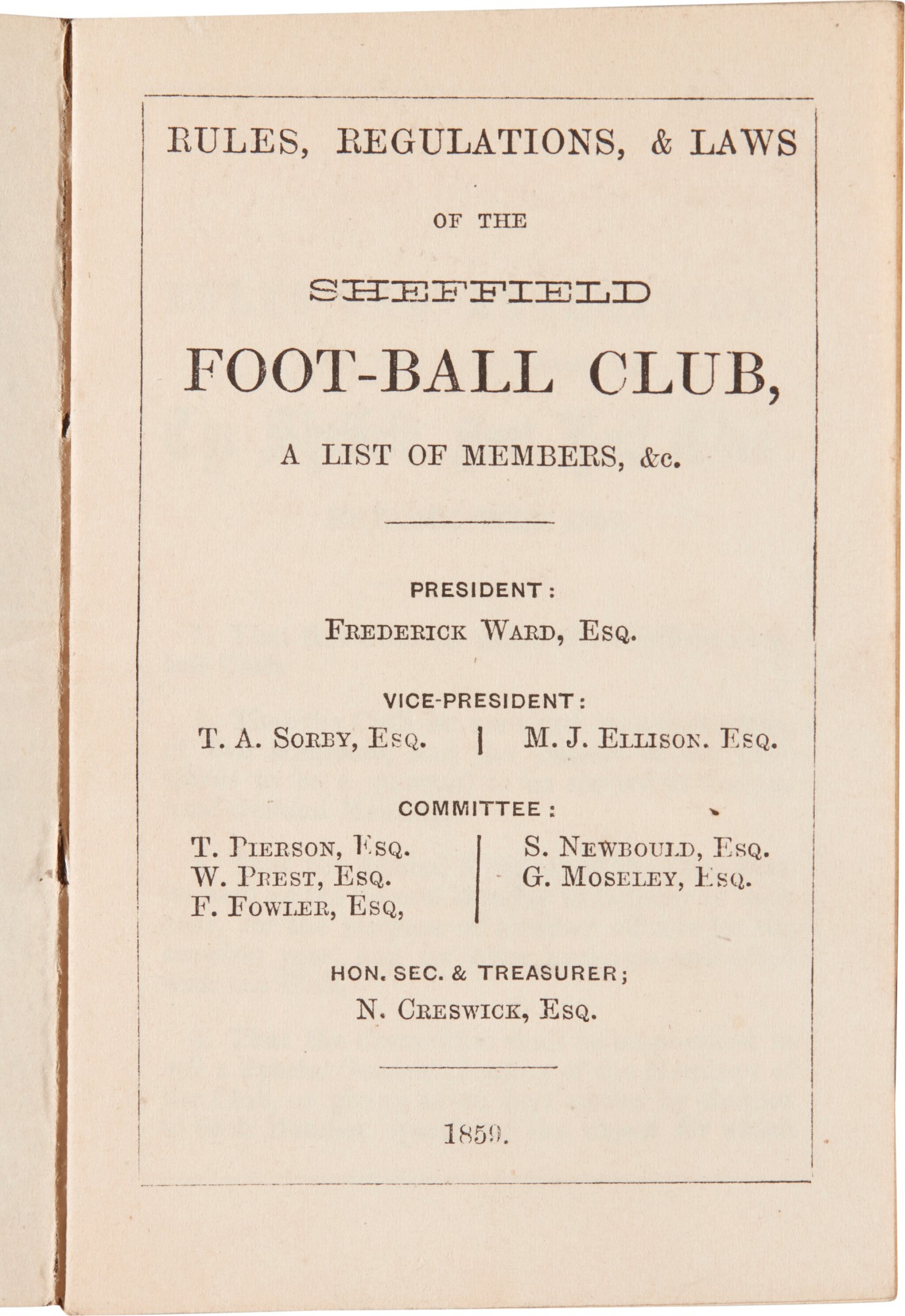 AN EXCEPTIONAL PIECE OF SPORTING HISTORY: ONE OF ONLY TWO KNOWN COPIES OF THE FIRST EDITION OF THE RULES OF FOOTBALL PRINTED BY THE WORLD'S FIRST FOOTBALL CLUB.

Sheffield Football Club was established in 1857, predating the founding of the Football Association by six years, and is acknowledged by both the FA and FIFA as the world's oldest football club. The club played a crucial role in the development of the modern game: the indirect free kick, the corner kick, and the crossbar were all innovations of the Sheffield game. Also, and perhaps even more importantly, the Sheffield game was the first expression of modern footballing culture. It was in Sheffield that football was first revealed as an unrivalled spectator sport, that the experience of inter-club competition was first experienced, and that football fans first revealed their loyalty and passion.

People had, of course, kicked balls about in play for centuries, but the formal rule-based game of football was a Victorian innovation. The game was incubated at public schools and universities: the unique copy of a printed pamphlet giving The Laws of the [Cambridge] University Foot Ball Club held at Shrewsbury School was probably printed in 1856 and is the only printed set of rules to predate the current item. The foundation of Sheffield Football Club brought the game into the community. The club committee held a series of meetings in October 1858 in which the laws of the game were drafted, and it was agreed that these laws be printed and a copy given to every member of the club. Prior to the discovery of the current copy, the only known copy of the first printed rules was the one that formed part of the historic archive of the club itself. The club's historic archive was sold in these rooms, 14 July 2011, lot 10, £881,000.

The current copy has the pencil signature of William Baker, the club committee member who signed off the original draft rules in the club minutes on 21 October 1858. Baker was also one of the club's best players and took part, for example, in the club's match against an FA side in March 1866 at Battersea Park. The current copy of the pamphlet is also uniquely revised to keep it up to date with developments in the laws of the game. The most significant is the hardening of the rules against handling the ball. The 1858 rules allowed the ball to be "pushed or hit with the hand" but not held (law 8), but in this copy a printed slip disallows "knocking or pushing [the ball] on". A handwritten note finesses the throw-in, specifying that the ball must "touch the Ground before coming in Contact with any player" (law 10). A new law (law 12) is also added by hand, requiring that flags be placed four yards from each goal post (this was to allow a short-lived secondary scoring system called a rouge). These revisions must have been made before 1862, when the club issued a new rulebook that included these and other changes.

This copy of the Sheffield FC rules was preserved in a scrapbook compiled by a local clergyman, the Rev. Greville John Chester (1830-92). Chester, whose father was a rector in Norfolk, served as curate in various parishes before taking on the incumbency of St Jude's, Moorfields, Sheffield in 1858. He served the impoverished parish for five years with exceptional zeal, and became well know for his efforts on behalf of the local poor. His health was poor, however, and he resigned in 1863, taking on a second career as a traveller and collector. Chester's collecting impulses are on display in this volume, which includes a wide range of pamphlets and leaflets printed in Sheffield and elsewhere during the period of his incumbency on a wide range of religious and social issues.

Sheffield FC pamphlet is fine condition, but the album lacking lower cover, loss at spine, upper cover detached, tears to various album pages and with loss, tears and creases to many of the inserted items.