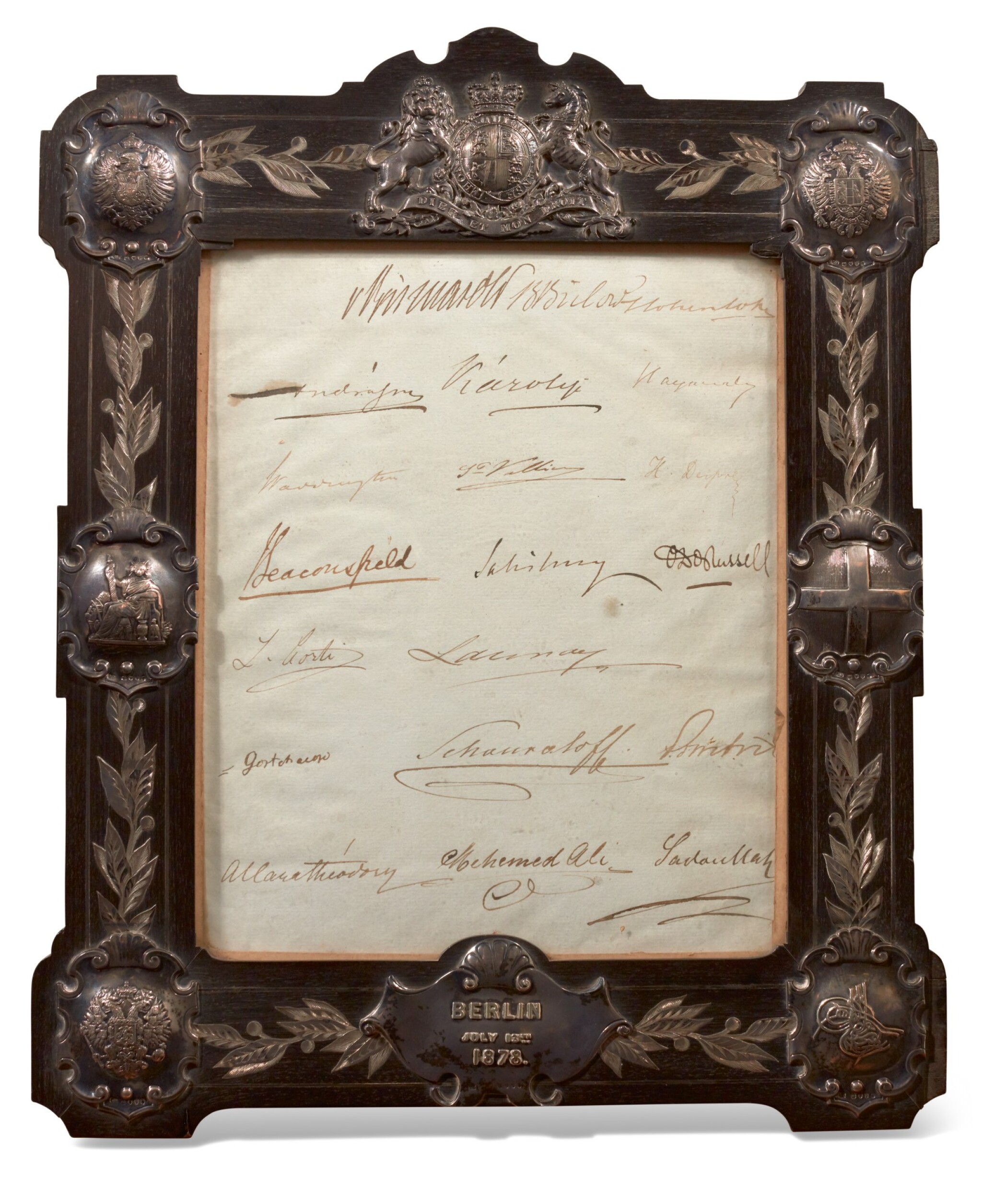 Signatures of twenty signatories to the Treaty of Berlin

representing Germany, the Austro-Hungarian Empire, France, Great Britain, Russia, Italy, and Turkey, including Otto von Bismarck (President of the Congress), Bernhard von Bülow, the Prince of Hohenlohe-Schillingsfürst, Count Andrássy, Count Alojos Károlyi, William H. Waddington, Lord Beaconsfield, Lord Salisbury, Lord Odo Russell, Count Corti, Ali Pasha, and Prince Gorchakov, 1 page, 4to, [13 July 1878], with, on an integral leaf, an autograph note signed by Lord Rowton certifying that the sheet was signed "at the final meeting, just before the signature of the Treaty of Berlin, and given to me, one of the Secretaries to Her Majesty's Special Embassy. The signatures are written in the same order and manner as throughout the Congress the Plenipotentiaries adopted in signing the Protocols", dated London, 18 April 1882, the leaf with signatures mounted in a wooden shaped upright rectangular frame applied with silver foliage and shell and scroll cartouche silver plaques, with international armorials including the British Royal Arms, one lettered "Berlin July 13th 1878", overall size c.370 x 315mm

A UNIQUE RELIC OF THE CONGRESS OF BERLIN. For more than half a century, the European powers had attempted to maintain a balance of power through the Concert of Europe, and the Congress of Berlin was to be the last of the major European congresses that maintained this system. The Congress which took place in Berlin under the stewardship of von Bismarck 13 June to 13 July 1878 was called to deal with the aftermath of the Russo-Turkish War of 1877-78 and culminated in a treaty signed by seven European powers. The war had weakened Ottoman power in the Balkans and fostered resurgent nationalism in the Slavic states supported by Russia. The Treaty of Berlin recognised the independence of Romania, Serbia and Montenegro, as well as the autonomy of Bulgaria, although the latter remained part of the Ottoman empire. The unresolved settlement of competing nationalisms in the Balkans would, eventually, provide the flame that ignited World War I.