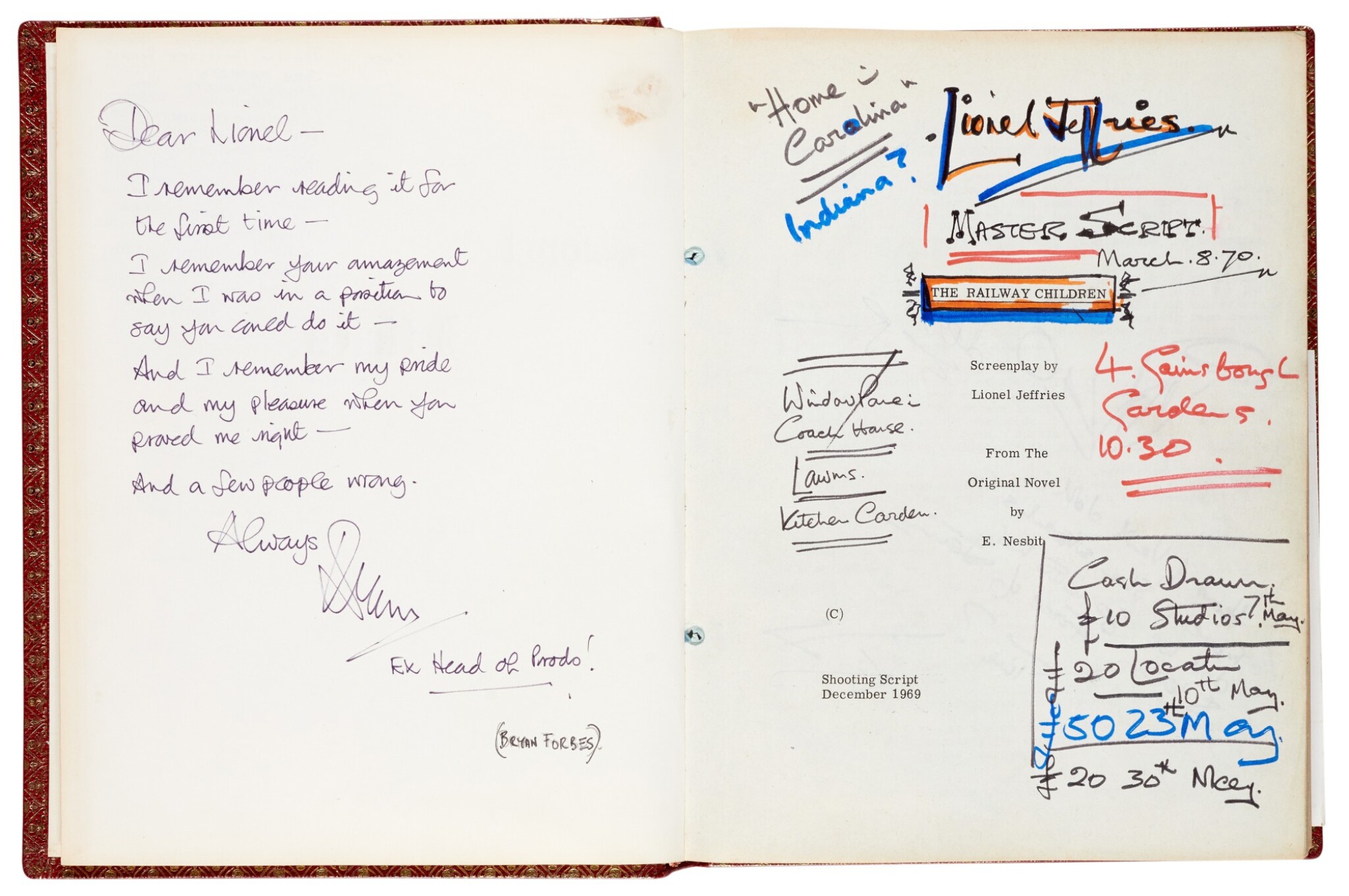 A collection including his revised shooting script as director of The Railway Children:

i) "The Railway Children Screenplay by Lionel Jeffries From The Original Novel by E. Nesbit', shooting script dated December 1969, with colour-coded and dated revises (25 pages dated 23 March 1970 and one dated 26 March 1970), extensively annotated throughout by Jeffries in blue, black, and red fibre-tip with cuts, revisions, notes, and rough sketches of shots, with a note of congratulation signed by Bryan Forbes (head of production at EMI at the time of production), also with a letter by a relation of E. Nesbit tipped in on the upper cover and a later letter signed by Forbes reiterating his affection for the film (March 2005) tipped in on the lower cover, along with some later pencil notes by Jeffries, 141 numbered pages, 1970, folio, bound in red morocco, gilt edges, with five press photographs loosely inserted

ii) E. Nesbit. The Railway Children. Harmondsworth, 1967, paperback reprint, 8vo, Jeffries's working copy extensively marked up throughout in black fibre-tip with cuts and notes, including a list of characters and casting possibilities, with additional white paper wrappers annotated by Jeffries

vii-viii) Two prop cabinet card photographs of the Waterburys and their London home, used in The Railway Children, each c.165-105mm, [1970]

THE SHOOTING SCRIPT FOR ONE OF THE BEST-LOVED FILMS IN BRITISH HISTORY. The Railway Children was a commercial and critical success on its release but has been adored by generations of families and is regularly included in lists of the greatest British films. A sequel, The Railway Children Return, is due for release in 2022. Jeffries's film is a sensitive rendering of Nesbit's beloved novel to which an exceptional cast brought great emotional depth. The trials of the children take place in a beautifully evoked Yorkshire landscape, and the famously film culminates with the deeply affecting scene of the father's return, stepping off the train to the cry of "Daddy! Oh my daddy!".

This script is the highlight of a group of scripts and other material from the family of the actor, writer and director Lionel Jeffries (1926-2010). The Railway Children was his directorial debut and was an immediate success from its release at Christmas 1970. His films that followed - including the psychological drama Baxter! and the supernatural mystery The Amazing Mr Blunden - also focused on children. By the late 1970s his style of film-making fell out of fashion. He continued to act professionally until well into the 1990s but did not make any further films.

This collection includes not only the master script used by Jeffries when filming The Railway Children, but also the annotated copy of the novel which he used when writing the screenplay and also some evocative props - a railway worker's lantern, the father's despatch case and some family photographs that feature in the opening credits. The collection also includes the master shooting scripts for Jeffries's two films that followed his first triumphant success. The Amazing Mr Blunden was included by film critic Mark Kermode in his list of the 25 best children's films and a new version, directed by Mark Gatiss, premiered in December 2021.