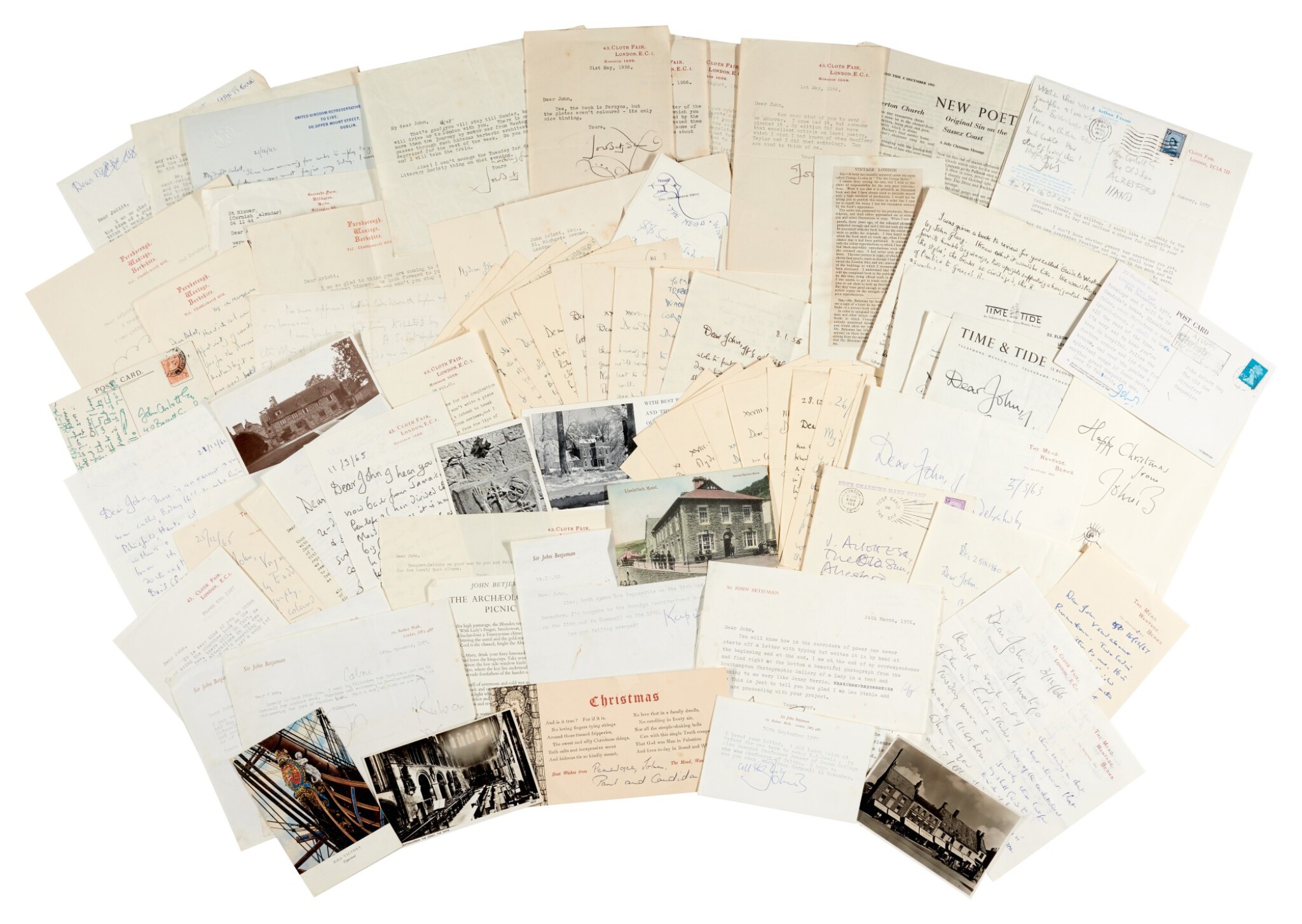 Lengthy series of 69 letters signed (some autograph, some typed) and 21 cards, to John Arlott

warm and friendly letters discussing books, poetry, architecture, conservation and development, as well as personal affairs, with related material including an autograph manuscript draft of an excoriating review of John Gloag's ‘Guide to Western Architecture’, 3 pages [published in The Spectator, 24 January 1958], printed copies of poems (some signed by Betjeman), printed ephemera and cuttings, c.134 pages, 12 December 1942 to 24 November 1980

A CHRONICLE OF JOHN BETJEMAN'S LONG FRIENDSHIP WITH "THE VOICE OF CRICKET". John Arlott (1914-91) first met John Betjeman in the early 1940s when he was working as a policeman in Hampshire. Betjeman encouraged Arlott's poetry and encouraged him to read more widely: “Do have a look at Geoffrey Grigson’s Anthology ‘The Romantics’ (Routledge 10/6). It is a knock out, I think. Full of lovely little known things” (21 December 1942). Over the years Arlott continued to send his poetry to Betjeman for honest criticism ("...The atmosphere, the story & the personalities splendid oh splendid & the climax grand. But the metre no....", 3 October 1952). It was Betjeman who recommended Arlott to the BBC as a potential broadcaster; by the summer of 1945 Arlott was working as a producer for the BBC and the following year he began the career as a broadcast cricket commentator that would make him a household name.

There are letters that touch on more personal subjects - Betjeman reflects on his mother's death in one letter, and in another acknowledges that he can "faintly feel the agony you have been through" following the death of a child - but Betjeman tends to keep to safer subjects; fine wines, topographical plates, and cricket dinners. Both men were bibliophiles and the friendship between the two seems to have rested a great deal on books. Arlott was famously generous and hospitable, and many of Betjeman's letters acknowledge gifts of books on subjects ranging from fine wine to Japan but most commonly British topography (“…How kind of you to give me Campbell’s Journey from Edinburgh – what superb aquatint plates, what variety of Gilpinesque deposition of light & shade…”, 28 December 1952). Their shared affection for the British landscape also comes through in discussion of architecture and development, for example when Betjeman provides advice on fighting a development that would have laid waste to the beautiful north London suburb of Highgate. It is often the chance comments that are most revealing about the letter writer, as when he recounts how a trip in a taxi had ended with an inspection of the driver's paintings ("affectionate and colourful") or when Betjeman responds to an offer from Arlott of a lift into London: “There is nothing I dislike more that the journey by motor car from Wantage to London. One passes through such hideous barbaric architecture that I get depressed for the rest of the week. So you can drop me at Didcot and I will take the train” (6 January 1954). Other letters touch on publishing projects, such as Betjeman's contribution to a posthumous publication by their mutual friend Pennethorne Hughes. A CHARMING EVOCATION OF BETJEMAN'S DISTINCTIVE CHARACTER AND HIS FRIENDSHIP WITH ANOTHER QUINTESSENTIAL ENGLISHMAN.