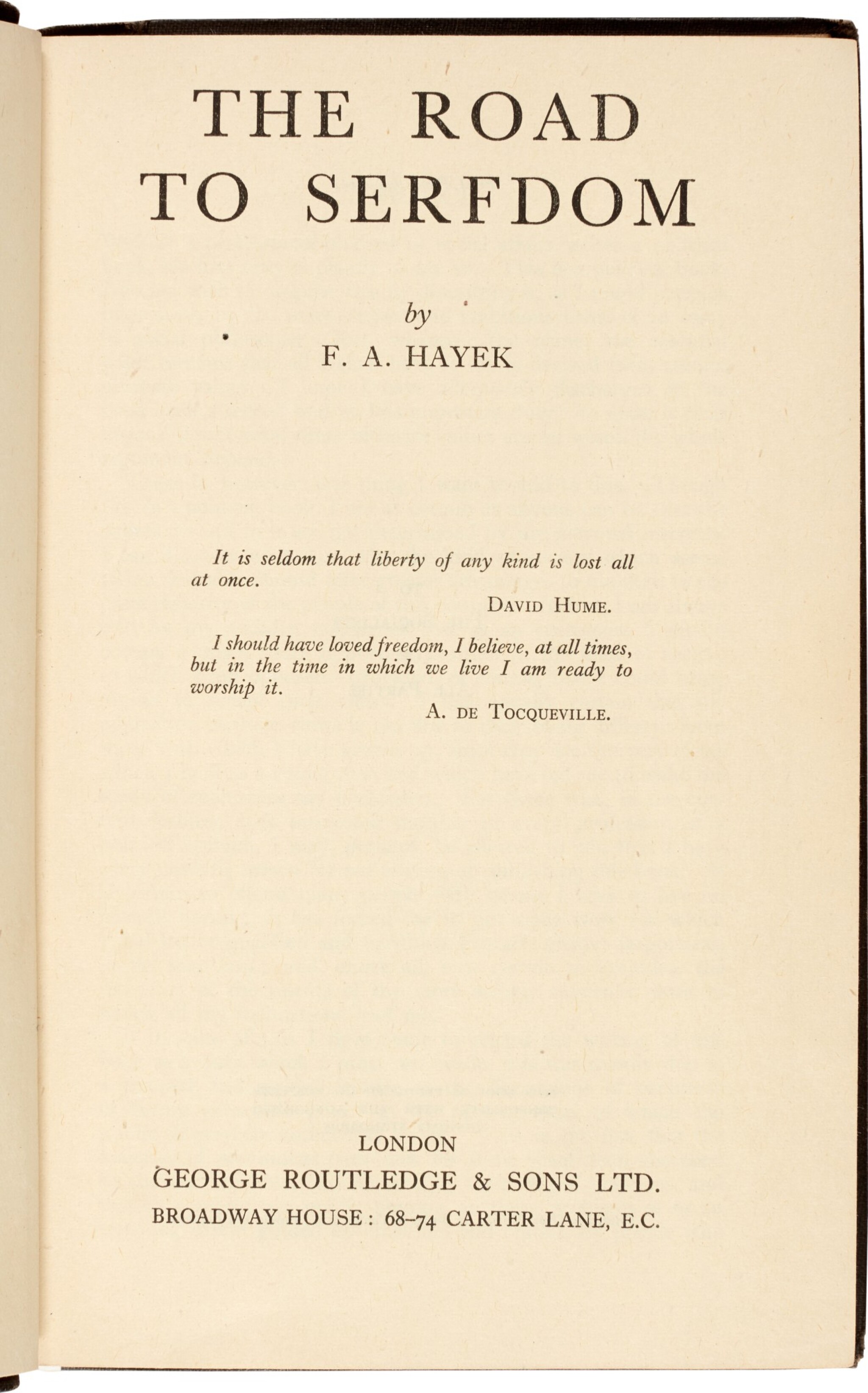 FIRST EDITION, 8vo, THE AUTHOR'S COPY with his ownership inscription in dark blue ink ("F.A. Hayek") and pencil note ("published March 10th, 1944") on front free endpapers, an autograph list of 12 early reviews (including "Observer 9/4 [1944] (George Orwell)") in blue ink on the rear endpapers, a small number of corrections (pp.39, 107, 111) and marginal notes (pp.130-31 and 137), a press cutting of a satirical poem on "World-Planners" on the front paste-down, and an autograph manuscript transcription of another satirical poem ("For the Tomb of Economic Man") on headed stationery of King's College, Cambridge, loosely inserted, original black cloth, titled in gilt on spine, DUST-JACKET folded and loosely inserted, binding rubbed, wear to spine and corners, adhesive residue to upper cover

THE AUTHOR'S PERSONAL COPY OF ONE OF THE MOST INFLUENTIAL BOOKS OF THE TWENTIETH CENTURY, OUTLINING THE THREAT POSED BY CENTRAL PLANNING TO PERSONAL LIBERTY, WITH THE RARE DUST JACKET. Hayek considered his powerful polemic to be his war-work; it was written during the wartime period when the London School of Economics, where Hayek had taught since 1931, was evacuated to Cambridge. Hayek himself had rooms in King's College (hence the use of King's headed stationery for the note which Hayek inserted into this book) - an arrangement organised by none other than J.M. Keynes.

The Road to Serfdom was written to address the likely mode of government in Post-War Britain but his powerful critique of the planned economy has proved to be much more widely applicable. Hayek saw the roots of Nazi tyranny in the left-wing governments of Weimar Germany and feared the growing enthusiasm for state intervention and planning in 1940s Britain. At its heart of his argument is the economic calculation problem: a nation’s economy is a system of incredible complexity in which information is naturally widely dispersed; pricing within a free market is an aggregation of knowledge that allows for self-organisation within a society where no one individual or group can have a full understanding of the determining factors. This is impossible to mimic in a planned economy. The problem is not only that planners will fail to gain the omniscience needed to allocate resources with the efficiency of the market, but that their attempt to gather the necessary information inevitably pushes them towards an ever-greater accumulation of power. Hayek accepted the need for the government to provide a basic safety net, but believed that the left’s desire to organise the economy would lead inexorably towards totalitarianism. The left would lead a nation down the "road to serfdom" not because socialists were ill-intentioned - the book is dedicated "To the socialists of all parties" - but because of the inherent flaw in their understanding of markets and their role in organising society.

The Road to Serfdom was published on 10 March 1944. The first edition of 20,000 copies sold out almost immediately. An American edition followed in September 1944, and the book reached a much wider audience through the condensed version that appeared in Reader’s Digest in April 1945. The Book of the Month Club alone distributed 600,000 copies of the condensed version. As a powerful challenge to the developing establishment consensus on both sides of the Atlantic for a pro-active role for the state, the book entrenched Hayek’s status as a strong voice of the libertarian right. When Churchill claimed during the 1945 General Election campaign that the Labour party would need “some sort of Gestapo” to fulfil its commitments to a Welfare State, this outburst was blamed on Hayek, and The Road to Serfdom was ferociously attacked by the New Dealers in the US. Hayek’s politics left him in a somewhat lonely position in the middle decades of the last century, but in the decades that followed Hayek was key to bringing reinvigorated free-market ideas back to the intellectual and political mainstream. Hayek never tried to repeat the exposition of his ideas in popular book form, although he was a tireless letter-writer to newspapers, nor did he get involved directly in politics.

The Road to Serfdom has sold some 2 million copies in 20 languages and is widely cited as one of the most influential books of the 20th century.