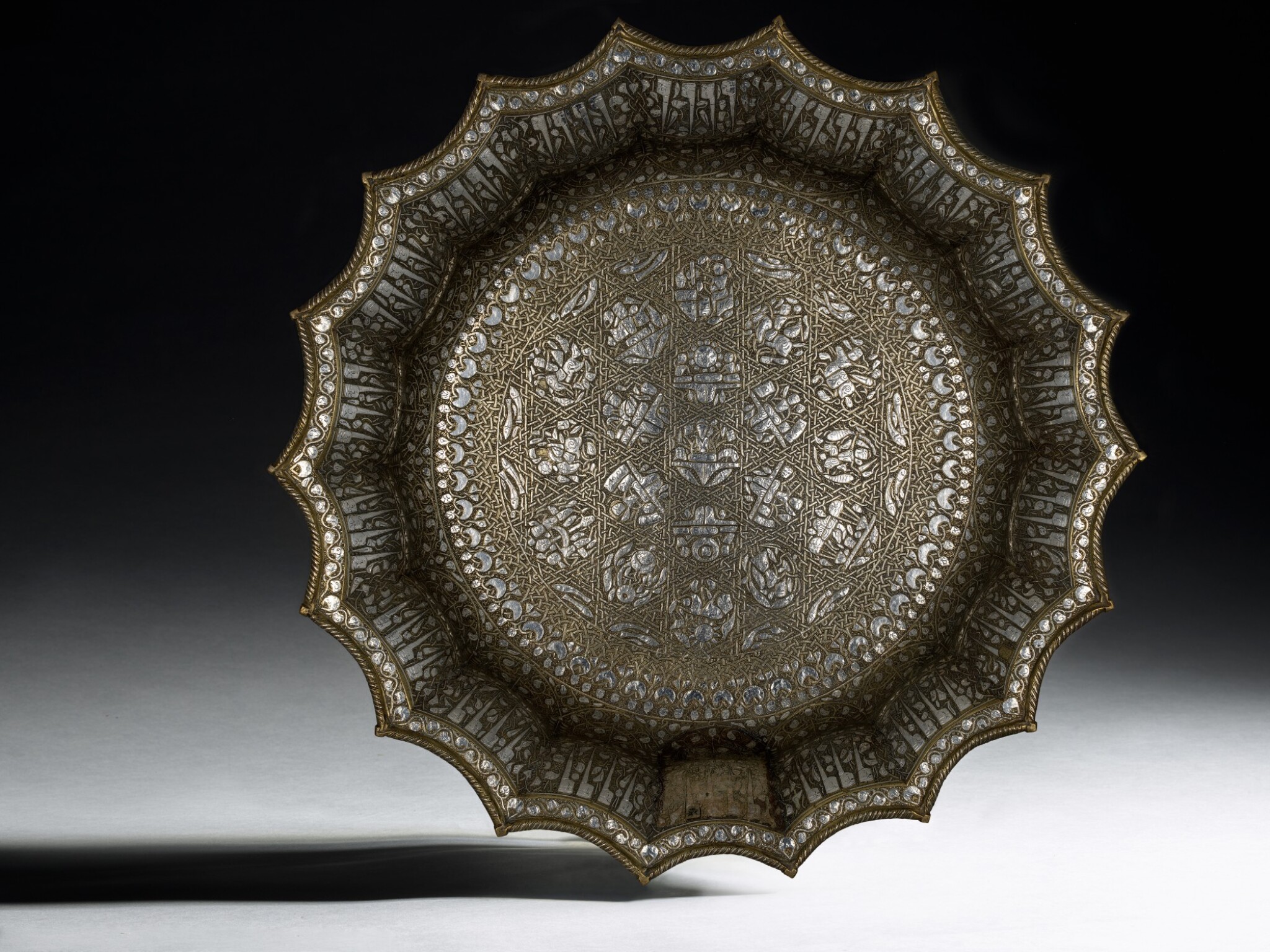 of deep-form with everted scalloped rim, the engraved design inlaid with silver and incised with details, along the everted edge of the rim is depicting a long twisting vine sprouting rabbits’ heads, the register below with a tall anthropomorphic calligraphic band and a smaller foliate inscription underneath, each petalled side with zoomorphic fronds (depicting waq-waq trees), the centre of the basin with astrological symbols, including five planets, the sun and the moon at the centre, surrounded by twelve signs of the zodiac, with an external band of interlacing strapwork with crescent-moons, the exterior plain

Most of the silver inlay remaining resulting in a strong and bright design visible on the interior, very few minor sections of the silver-inlay are missing, notably to the face of the rider on taurus and the ram's face in Aries, one petalled side with abrasion and encrustation - the rest of the basin was professionally cleaned to reveal the extensive silver inlay decoration, few further small sections with oxidisation, the exterior with oxidisation and some abrasion near the rim, as viewed.

Nicholas Paleologos was born in Braila in Romania, North-East of Bucharest. His father Michael was descended from a Greek family of noble Byzantine origin who ran the family-owned shipping business. Their home was in Sulina on the West coast of the Black Sea. Paleologos served with the British Royal Navy during the Second World War, and afterwards joined the merchant trading firm Ralli Brothers Ltd, for whom he worked in India and Pakistan between 1948 and 1960. It was during this time that Paleologos is believed to have acquired the present basin.

Around the rim, in cursive, starting with: ‘Glory and Prosperity’

And continuing with the repeat of: 'Health and'

In the narrow band, in Kufic, repeat of: 'Piety and'

This basin is not only one of the most magnificent surviving examples of Herati silver-inlaid metalwork of the twelfth/thirteenth century but also a prime example of how astrology is harnessed both for protection and as an expression of power. The iconography reveals a complex knowledge of astrology and a belief at the highest level of both the apotropaic and governing influence of the stars.

This magnificent basin provides an insightful glance into twelfth/thirteenth century silver-inlay metalwork craftsmanship in Herat, in present-day Afghanistan, but at that time part of the broader Khurasan province. It is in remarkable condition, with almost all of its original silver inlay intact, making it a rare survival from the period. The brass surface has been extensively chiselled and inlaid with silver and further stylistic details were engraved onto the surface of the inlays. The decorative design centres on an iconography of power through strong astrological symbolism. Featuring the twelve signs of the zodiac, planets, waq-waq trees, anthropomorphic inscriptions, and the sun-like form of the basin itself, all would have contributed to asserting the owner's power within both an earthly and cosmic realm. The combination of these details would have further had the benefit of serving an apotropaic or protective function, as indicated by the inscription in which the words ‘Glory and Prosperity, 'Health’ and ‘Piety’ can be made out. Repetitions of the word 'Glory' (al-'izz) can be made out in the micrographic script written on some of the attributes belonging to the planets in the centre, further re-enforcing the belief in this function.

The iconography of this basin relates to a group of brass ewers attributed to Herat, Afghanistan, in the late twelfth and early thirteenth century based on stylistic similarities and an inscription from a comparable ewer in the Georgian State Museum, Simon Janashia Museum of Georgia in Tbilisi (inv. no.19-2008:32). Known as the 'Tiflis ewer', the ewer in Tbilisi states that it was "made by Mahmud ibn Muhammad of Herat in Herat in the month of Sha'ban 577" (19 December 1181-17 January 1182 AD). The ewers from this group share stylistic as well as decorative features and often include benedictory inscriptions, sometimes dedicated to an anonymous owner. While the 'Tiflis ewer' is comparatively simplistic in its ornamentation, ewers with zodiacal signs can also be found in museum collections such as the State Hermitage Museum, St. Petersburg, inv. no.ИР-1436, the Louvre Museum, Paris, inv. no.OA 5548, the Metropolitan Museum of Art, New York, inv. no.44.15, and the British Museum, London, inv. no.1848,0805.1,2. Those in this group may fall later in the sequence of ewers, datable to c.1180-1220, on the eve of the Mongol invasions which had a catastrophic impact on the inlaid metal industry in Khurasan.

Large basins of this form are rare. The closest example with scalloped edges, measuring sixty centimetres in diameter, is in the Nasser D. Khalili Collection, London (inv. no.MTW 1242), see J.M. Rogers, The Arts of Islam, Masterpieces from the Khalili Collection, London, 2010, pp.96-97, cat.103. Although the decoration at the centre of the basin is divided in the same way as our example, it features rosettes in each hexagon rather than a zodiacal repertoire.

As Stefano Carboni notes: “In the medieval Islamic world, the science of astrology was based on a knowledge of astronomy passed on to the Arabs from Greek sources and consequently translated into Arabic. During the first centuries of Islam, it developed further, after the introduction of new observations and mathematical calculations, and the astonishing progress made in science, to which European culture would owe so much” (S. Carboni, Following the Stars: Images of the Zodiac in Islamic Art, The Metropolitan Museum of Art, New York, 1997, p.3).

The centre of the bowl features the planetary cycle, with Saturn in the middle, surmounted by the Sun, and clockwise – Mercury, Mars, the Moon, Jupiter and Venus. The Sun and Moon, which were ranked as planets in their own right, were believed by Islamic astronomers to orbit the Earth in concentric circles, with an outer sphere that contained the stars, and thus the Zodiac. Saturn was actually considered the most distant and most negative of the planets, depicted here enthroned in his talismanic aspect with iconography derived from Indian sources including severed heads, one held up by the hair, and a fox-dog signalling misfortune (the paired fish underneath his throne mimic the pairs of fish found in the interstices of the main outer field of decoration). Sixth in ascending order is Jupiter, depicted here as a turbaned Arab man (a qadi) enthroned with attributes of learning. Mars, lord of war and minor misfortune, is in fifth place and shown as a male warrior brandishing a sword, a bow and other martial attributes surrounded by severed heads. The Sun, shown here as a radiant disc with two faces, enthroned and flanked by attendants, is fourth in ascending order of distance from the earth. Venus, seated cross-legged playing a short-necked lute (barbak), finger cymbals (tal), a long-necked two-stringed lute called a dutar (derived from the Persian name ‘two-strings’) and a type of small arched harp called a waj, was third in line. Mercury, the second closest planet is represented as a young beardless scribe with a reed pen in the act of writing on a scroll (note the crossed kursi bookstand). Unsurprisingly, the moon, personified as a female figure seated cross-legged, her face framed within a crescent moon flanked by attendants, appears as the closest planet. It is interesting to note that each planet has multiple arms in which they carry emblems associated with their influences. This multi-armed appearance is indebted to Hindu mythology (W. Hartner, 'The Pseudo-planetary Nodes of the Moon's Orbit in Hindu and Islamic Iconographies' in Ars Islamica, V, pt.2, 1938, p.131). Such multi-armed figures can be seen on one of the most famous Khurasan metalwork vessels, the Vaso Vescovali in the British Museum, London, inv. no.1950,0725.1. (For a detailed study of each of these figures on the Vaso Vescovali, invaluable in identifying the planets and understanding the zodiacs, see W. Hartner 'The Vaso Vescovali in the British Museum. A Study on Islamic Astrological Iconography', in Kunst des Orients, 9, 1973).

The signs of the Zodiac are each combined with their related planetary lords, starting from above the central figure and anti-clockwise: Saturn in Aquarius (The water carrier with Saturn, depicted as an old man drawing water from well); Jupiter in Pisces (the Fish are held by Jupiter depicted as a seated man); Mars in Aries (the Ram is ridden by Mars, depicted with his known attributes - a sword and severed head); Venus in Taurus (the Bull or Ox is being ridden by Venus who is playing an instrument); Mercury in Gemini (the Twins feature between a head on a stick, probably the head of Rahu, from Indian astrology, the ‘eclipse demon’ (see lot 75 for more on this character); Moon in Cancer (the Crab is depicted with the Moon above and dragon heads along his side (these are linked to nodes and eclipses of the Moon)); Sun in Leo (the Lion is depicted with tail ending in a dragon’s head and the Sun above); Mercury in Virgo (the Virgin is depicted as ears of corn that are being held by Mercury, who is shown as an old man); Venus in Libra (the Scales appears with Venus playing the lute); Mars in Scorpio (depicted as two scorpions between Mars who holds a sword); Jupiter or the Planetary eclipse in Sagittarius (the archer is in his characteristic centaur form shooting an arrow at the dragon (in this case, looking like a harpy); Saturn in Capricorn (the Goat/Ibex is ridden by Saturn) (see J. Allan, Islamic Metalwork: The Nuhad Es-Said Collection, London, 1982, pp.46-53, no.5 for detailed images of these symbols and their descriptions on a Khurasan ewer of the same period. See also M.S. Dimand, 'Saljuk Bronzes from Khurasan' in The Metropolitan Museum of Art Bulletin, New Series, Vol.4, No.3 (Nov. 1945), p.87). Further details of note which form part of this diagram include the paired fish which fill the interstices between the hexagons in which appear the Zodiac symbols and the circular form that denotes the central design on this bowl. These evince a known repertoire and may allude to the use of this bowl, to hold a liquid. They are surrounded by a band of crescent moons and within the border of the basin are waq-waq trees – originally from India, these were legendary for they were said to bear fruit which had zoomorphic, human and mythical heads and held an oracular significance.