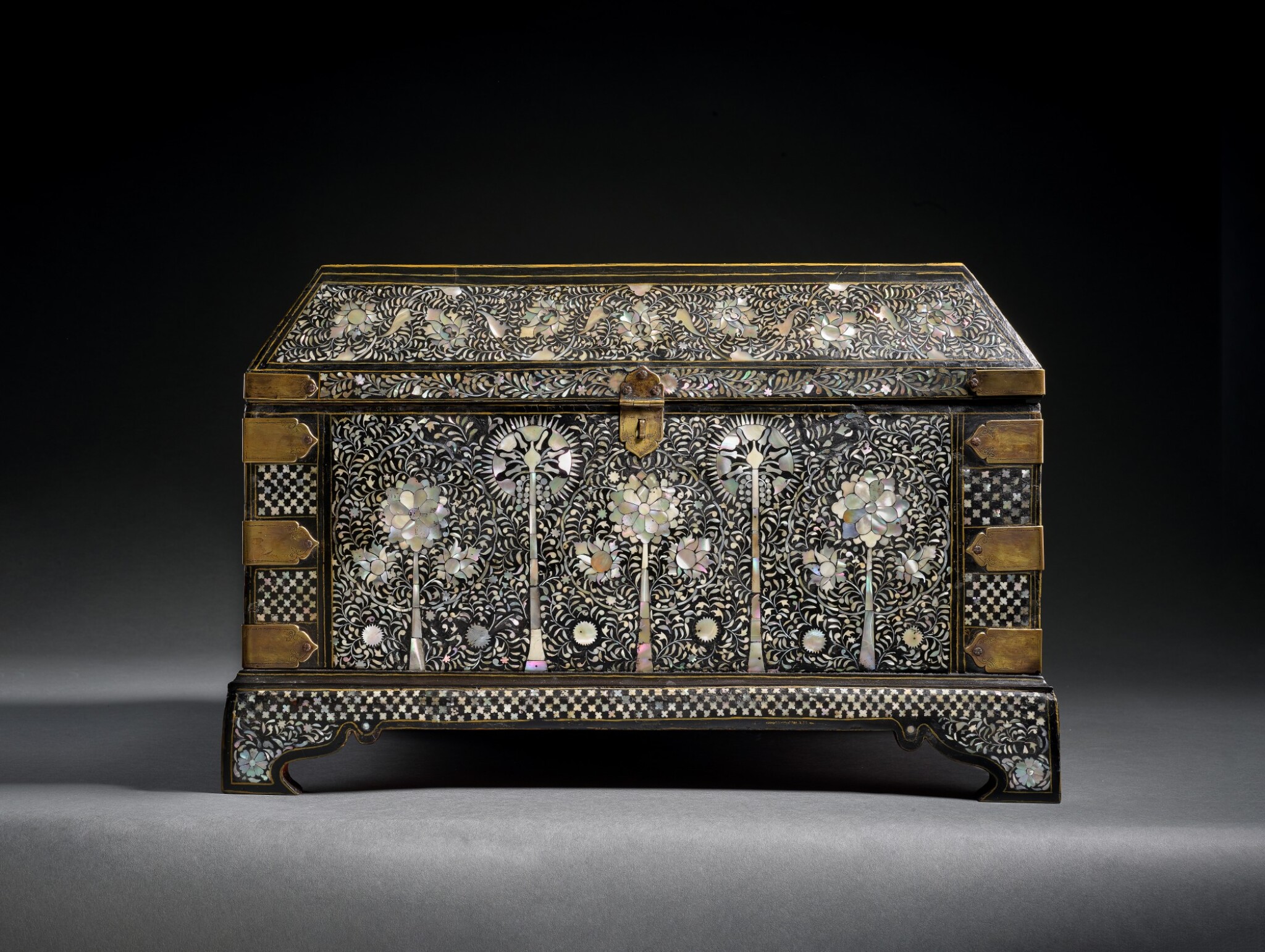 of rectangular form on bracketed feet with hinged bevelled cover, wooden structure covered with black lac and overlaid with mother-of-pearl, decorated with panels of floral trees and vines on a ground of spiraling leafy stems, brass mounts with punched designs, iron handles to sides, the interior with original painted decoration featuring birds amidst foliate details, with three lidded compartments

The casket in overall good condition, the decoration is mostly complete, even to interior, has had some restoration, for example, the mother of pearl decoration is almost fully visible, the lid with a few small sections in which these appear to have been restored, there is also a little restoration to the mother of pearl on frontal design, the black lac has been restored throughout in minor sections, areas with slight craquelure and abrasion, the mounts with very slight oxidisation, the interior painted decoration bright, with some abrasion causing a little discoloration along one edge inside lid, some slight rubbing to painting, notably the gold, some minor nicks to edges and slight repainting with minor flaking, as viewed.

Art of the Expansion and Beyond, Jorge Welsh Books, London, 2009, pp.54-67, no.3.
This casket belongs to a rare group of overlaid mother-of-pearl work produced in Gujarat in the sixteenth century. Of the few known examples, most of which are now in museum collections, this piece is one of the most outstanding in terms of the quality of its design, execution and condition.

Testifying to the global trade network established by the Portuguese in India, this piece combines local craftsmanship with a combination of influences created for the European market. Capturing the imagination of the European courts, furnishings of mother-of-pearl from India were listed in Royal inventories since the early sixteenth century. Records from the Grünes Gewölbe (Green Vault) in Dresden indicate that Gujarati mother-of-pearl wares were being imported to Europe from as early as the second quarter of the sixteenth century. Although the commissioning of such wares was particularly associated with the Portuguese, these precious objects were traded throughout the European courts via merchants during the sixteenth and seventeenth centuries as high-value gifts and luxury imports.

The earliest dated mother-of-pearl objects are a ewer and basin formerly in the Kunstkammer of the Electors of Saxony dated by the Nuremberg mounts to before 1530. In 1529, François I, the King of France (r.1515-47), is said to have acquired a mother of pearl chalice from a French merchant based in Lisbon (H.M. Crespo, At the Prince's Table: Dining at the Lisbon Court (1500-1700): silver, mother of pearl, rock crystal and porcelain, 2018, p.135). Another casket, entirely covered with mother-of-pearl, was elegantly mounted between 1532 and 1533 by Pierre Mangot, principle silversmith to the King at the time of François I, which further attests to the attention accorded such objects (Louvre Museum, Paris, inv. no.OA 11936). In England in 1534, Thomas Cromwell presented Henry VIII with a mother-of-pearl ewer set in gold as a New Year's present (see A. Jaffer, Luxury Goods from India: The Art of the Indian Cabinet-Maker, 2002, p.39, no.11).

Of particluar note is the technique used to decorate this casket, with a mastic ground overlaid with fine sections of mother-of-pearl to create a fluid vegetal design. It was most likely produced in the capital city of Ahmedabad, an attribution based on the in situ survival of mastic-inset mother-of-pearl decoration on the tomb canopies of Shah Alam at Rasulabad and Shaykh Ahmad Khattu at Sarkhej, both erected between 1605 and 1608. A reference to Ahmedabad and mother-of-pearl furniture is made by the minister at court Abu’l Fazl ibn Mubarak (1551-1602) in his ‘Ain-i akbari. Although a number of works of varying sophistication were produced using this difficult technique, including a small group of caskets such as this one, penboxes, shields, and game boards, the present piece represents a rare addition to a corpus of less than ten known caskets of identical form (see The Heritage of Rauluchantim, Lisbon, 1996). One of the closest examples, with tall flowering trees against a ground of swirling foliate vines, is now in the Monasterio de las Descalzas Reales, Madrid (inv. no.00612591). The other casket of similar design but later highlighted with gem studs once featured in the inventory of the Archduke of Austria Ferdinand II in 1596 (f.468V) in Ambras Castle, Innsbruck, and is now in the Green Vault, Dresden, inv. no.Nr. PA 861 (see Exotica: Portugals Entdeckungen im Spiegel fürstlicher Kunst- und Wunderkammern der Renaissance : eine Ausstellung des Kunsthistorischen Museums Wien mit Unterstützung des Calouste Gulbankian Museums in Lissabon, 2000, no.64. Further comparable caskets of note are in the Islamic Arts Museum Malaysia, Kuala Lumpur, inv. no.2020.4.1 and the Arthur M. Sackler Gallery, Smithsonian Institution, Washington, D.C, inv. no.S1988.1.

The tall palm trees and flowering trees surrounded by lace-like vegetation on this chest recall the extraordinary window jalis of the Sidi Saiyyed mosque in Ahmedabad. Constructed in 1573 under Mughal rule, this monument is iconic landmark of the last Gujarat Sultanate, and one cannot help but imagine that the craftsmen of this chest was directly inspired by its design. Parallel to this, one can observe a Japanese influence in the chequerboard details on the edges and on the band near the base of the chest recalling Namban lacquerwares which integrated mother of pearl and were produced for a European audience, notably the Portuguese. It is thus likely that one of these works would have found its way from Japan to Ahmedabad with a Portuguese merchant, further adding to this mixture of influences.

The mother-of-pearl used on this casket most probably came from the shell of the turbinella marmoratus (ibid, pp.149-150, fig.23). Mainly found in the Indian ocean, these shells are known for their pinkish hue, an indication of both provenance and rarity. The thin layers of mother-of-pearl which were used became highly prized and symbolic of exoticism and wealth. The painted interior of the present casket is equally impressive and in fine condition. For further discussion, please see Art of the Expansion and Beyond, Jorge Welsh Books, London, 2009, pp.68-75, no.4.