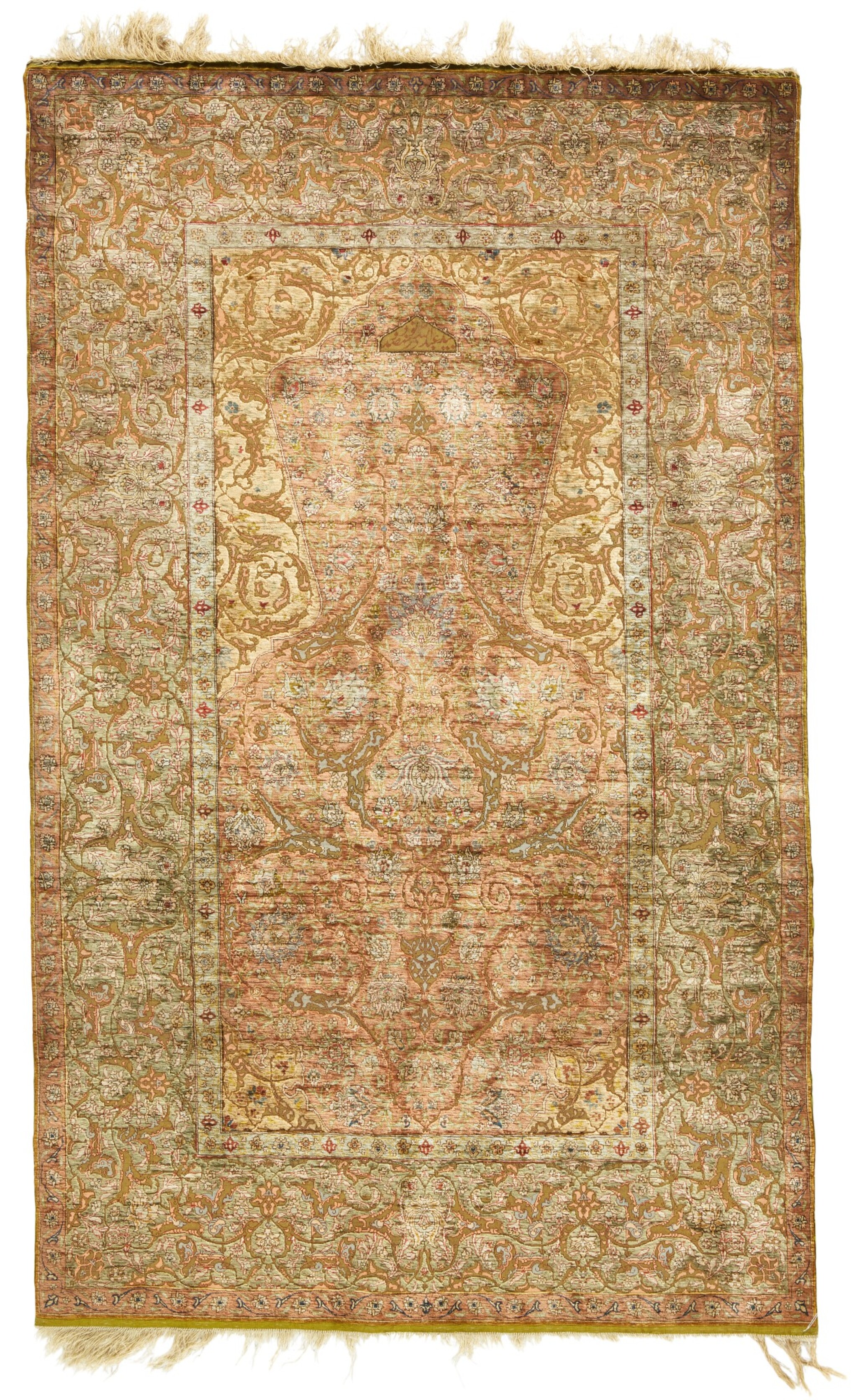 Pile overall in very good condition, dense, evenly sheared and probably near its original depth. Polychrome silk and metal thread brocading. Unable to locate signature, although stated as Zareh when previously sold at Bonhams, hence the 'attributed to'. There is a sheath stitched to the upper edge on reverse to take a hanging rod - rug has probably mostly hung considering pile dept. Upper end fringes in very good condition, lower end with silk kilim; losses at lower end to fringes. There are a handful of small splits along the left hand side (see additional images on request) and one section where the side cords have become detached approximately 20cm from the top edge (see additional images on request). Conservation cleaning and stabilisation recommended

The advent of the fine silks of Istanbul, termed Kum Kapi (literal translation ‘Sand Gate’) after the location of the workshop, in the late 19th and early 20th century, is largely indebted to two great masters, Hagop Kapoudjian (d. 1946) and Zareh Penyamin (1890 - 1949). Not a great deal is known about these men, originally from Kayseri, aside from the research undertaken by Pamela Bensoussan and the leading collector George F. Farrow (1916-2001), both of whom were assisted by Duncan Miller and Arto Keshishian - whose father, Karnik Keshishian, knew the early masters personally. This piece is attributed to Zareh Penyamin; a cartoonist for the Ottoman Court, Zareh was a perfectionist who oversaw and curated all aspects of any single work with the utmost attention to detail, demanding the highest standards from his weavers. The design of the present lot, known as 'Sultans Head', is based upon the Safavid 16th and 17th wool prayer rugs found in the Top Kapi treasury; Zareh may have seen these pieces whilst in the Sultan's employ, or located them in the Istanbul marketplace. The Persian inscription on the present lot suggests the tantalising possibility it might have been copied from a now lost original, since the catalogue of known examples of Top Kapi prayer rugs, collated by Michael Franses, see Eiland, M.L., Jr. and Robert Pinner, eds., Oriental Carpet and Textile Studies, vol. V, part 2: The Salting Carpets, ICOC, 1999, does not include an example with this particular inscription. When sold at Bonham’s in 2014, the cataloguer noted ‘Cartoons found in Zareh's portfolio include a typical design from a well known Top Kapi prayer rug that shows the use of cloudbands, inscriptions, arabesques and palmettes similar to those found in the present rug’. The Kum Kapi 'Sultan's head' prayer rugs when they include script more often bear text from the Qur'an, to the larger three borders, each repeating 'Ayat al-Kursi'. The smaller corner cartouches are also usually differing names for God,; ya sami, rafi’, mani’ and rafiq. The small letters to the border of the mihrab are verses from a qasida, or eulogy, by the 11th century Persian poet Manuchehri and the central cartouche to the mihrab the phrase “This, too, will pass”. Similar combinations of inscriptions are found in a number of the extant original Top Kapi prayer rugs, so Zareh certainly knew those pieces. The Kum Kapi production differs of course quite profoundly in its use of materials; the rugs are piled in silk, not wool, and the colours used reflect a late 19th and early 20th century taste for the pastel colours of the boudoir, rather than the rich and vibrant colours of the Safavid pieces. The metal thread is silvered metal on a copper strip and both the metal and coloured silk brocading is supplementary, rather than weft faced as it is in the original rugs. For extensive discussion of the Safavid originals, please see the catalogue note to the preceding lot.