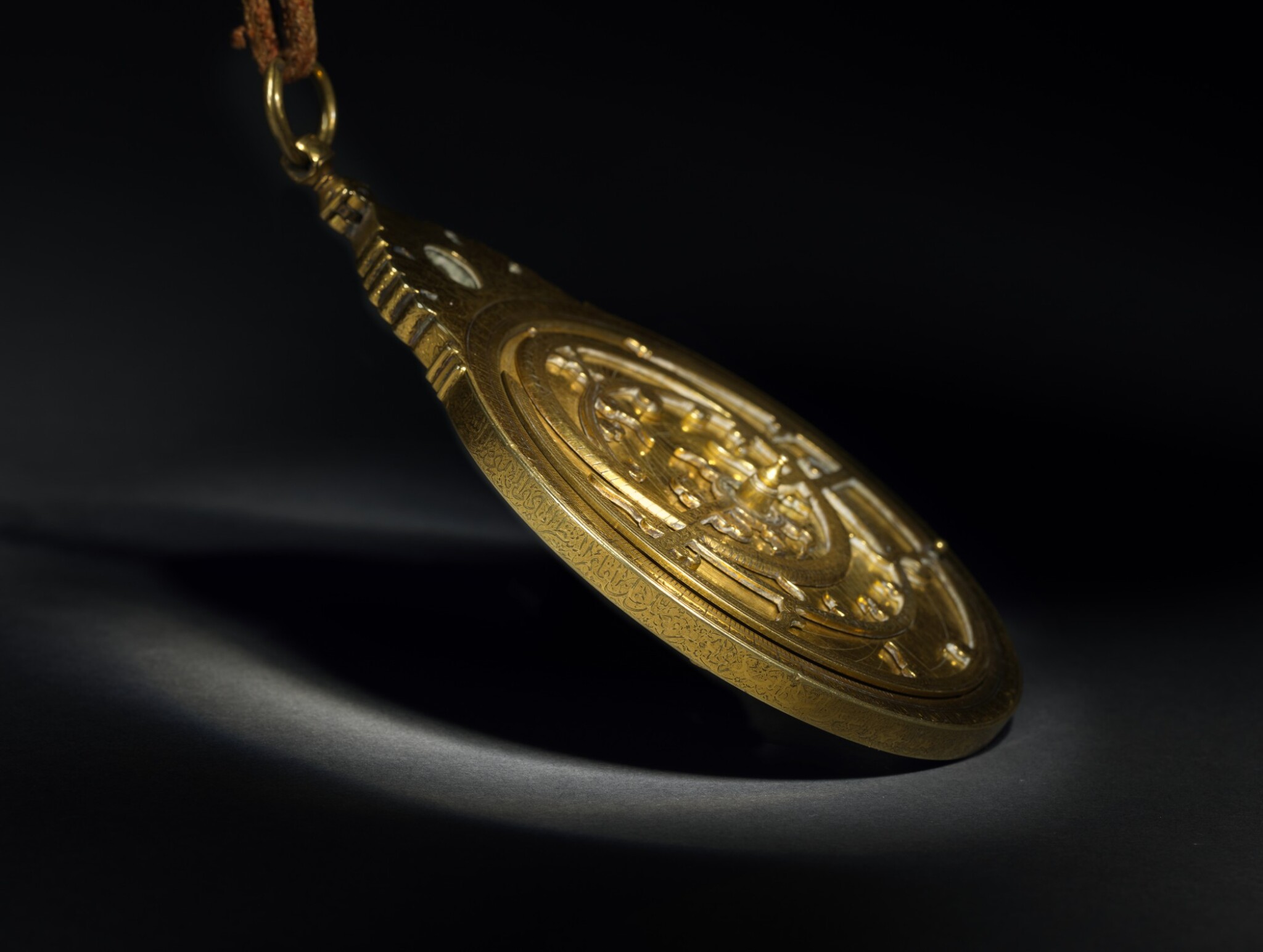 cast brass, with gilded mater and original rete, the gilding possibly added later, hammered and engraved with elaborately designed cusped throne designed with compass (now missing) and hook, the rim of the mater gradated into 360 degrees divided by 1°, engraved in elegant naskh, containing five plates engraved on both sides, four with specific latitudes and stereographic projections: the azimuth every ten degrees and altitude every three degrees, one plate with a stereographic projection on one side and the hours of prayer on the other, the finely designed foliate rete with twenty-four star pointers, the reverse typical of Safavid productions, with a trigonometric quadrant with horizontal parallels for each 1° in the upper left, in the upper right is a solar quadrant with curves displaying graphically the altitudes of the sun at midday for a series of latitudes and the altitudes of the sun when it is in azimuth of the qibla at a series of cities, including Isfahan, below a double shadow square and cartouche with Muhammad Mahdi al-Yazdi's signature, Muhammad Husayn ibn Muhammad Baqir al-Yazdi's signature at the upper right hand curve of the mater's reverse, alidade missing sighting edges and missing pin, hook at top with suspension cord

The mater and rete gilt at a later date, the rete with some rubbing to central ring and reverse with oxidisation, the mater also gilt, the reverse rubbed with discoloration, part of inscription with decorator's signature rubbed but visible, missing compass in throne, later cord for suspension with wear, the alidade missing sighting plaques and pin for fastening missing, the plates each with oxidisation (one in which the discoloration is more evident than the others), and some light scratches consistent with use, as viewed.

﻿This elegant astrolabe was made by two of the leading instrument-makers of Safavid Iran in the mid-seventeenth century: Muhammad Husayn ibn Muhammad Baqir al-Yazdi (the maker) and Muhammad Mahdi al-Yazdi (the decorator). That the inscription on the throne tells us it was made for an important Imam and theologian proves the high esteem in which these two craftsmen where held at the Safavid court.

The astrolabe is a model of the universe in two dimensions, with it one can simulate the apparent rotation of the celestial sphere about the horizon of the observer and solve numerous problems of mathematical astronomy and astrology, such as timekeeping by the sun and stars and setting up the basis for the casting of horoscopes. Muslim scientists and craftsmen made an object of beauty out of the astrolabe, preserving its scientific integrity by engraving the astronomical markings with an astounding mathematical accuracy and decorating as befits what they saw essentially as a mirror of God's universe (D.A. King, Astronomical Instruments between East and West, 1992).

Several hundred astrolabes, many exquisitely fashioned, were made in Iran during the Safavid period, mainly in Isfahan between the years 1650 and 1715. However, only a small minority are presentation pieces made for the shahs or of a quality fit to have been presented to important figures and dignitaries. The remainder, the vast majority, were made for private use and pleasure.

This finely-crafted astrolabe was made for an important Safavid theologian, Mirza Razi al-Din Muhammad al-Husayni al-Musawi, who was also Imam Jum’ah and a teacher in Isfahan. Born in Shiraz, Musawi spent the latter part of his life in Isfahan where he died on 11 September 1701. Unusually, the outer edge of the mater features the inscription 'God to bless the Fourteen Innocents, may God bless them all'.

This is a historically significant piece the maker of which can likely be identified as the Muhammad Husayn who made one of three surviving world-maps engraved on circular brass plates that caught the attention of the scholarly world some twenty years ago. The maker's father, Muhammad Baqir al-Yazdi, was the leading mathematician of Safavid Iran who wrote many major treatises on astronomy and science and taught a number of the most prolific instrument makers of the Safavid period (see D.A. King, World-maps for finding the direction and distance to Mecca, Innovation and Tradition in Islamic Science, Leiden, 1999, p.131).

For more on Muhammad Husayn see ibid, pp.255-6. For more information on the decorator, Muhammad Mahdi al-Yazdi, see L.A. Mayer, Islamic Astrolabists and their Works, Geneva, 1956, pp.70-71). An astrolabe by Muhammad Husayn Baqir al-Yazdi, dated 1057 AH/1647-8 AD, was sold in these rooms, 24 October 2007, lot 188. To the best of our knowledge the present astrolabe represents the only other example known that bears his signature.