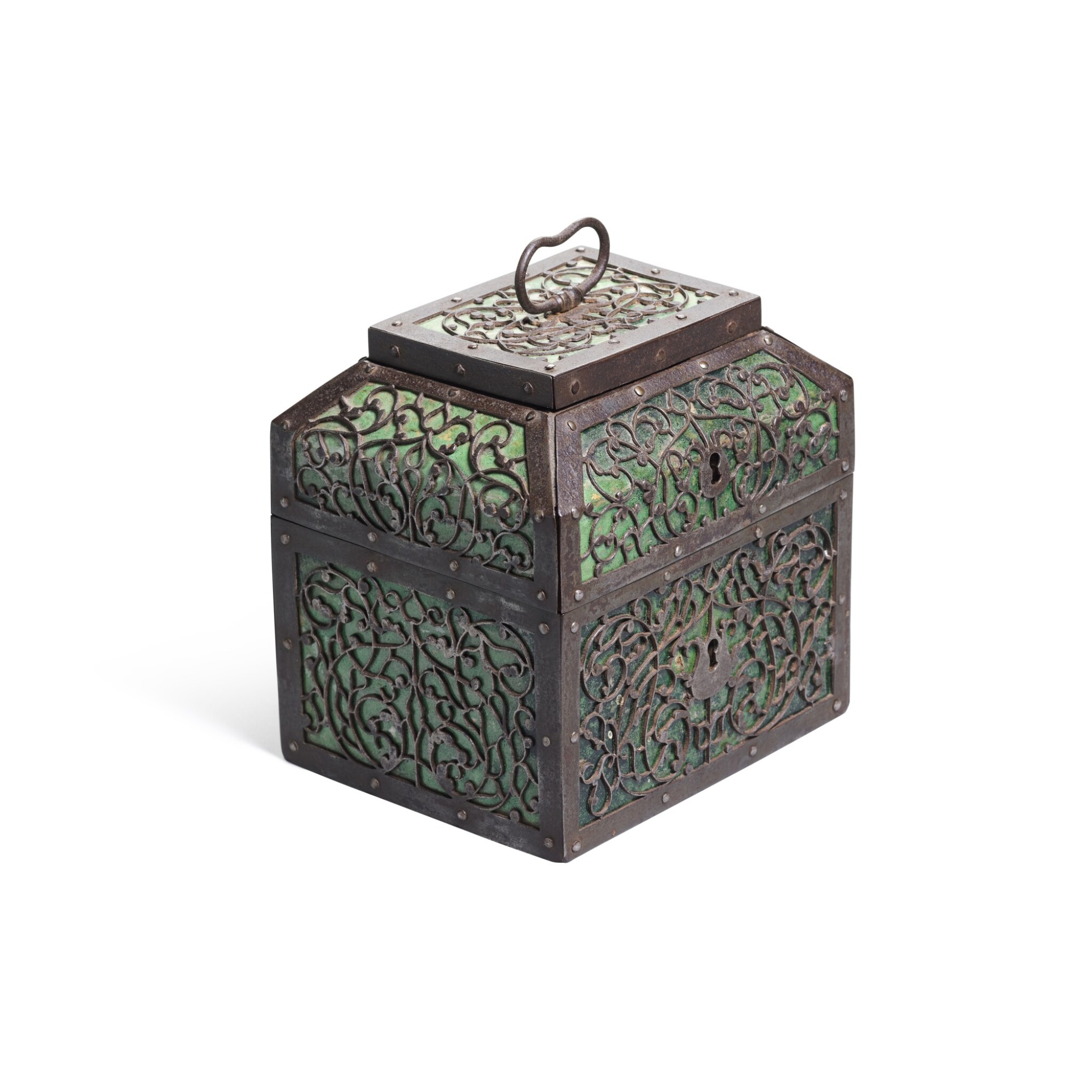 of tall rectangular form, with hinged lid leading to a smaller hinged lid revealing an internal upper compartment, both velvet-lined, the lower compartment with working lock, the wood body lined with green mica panels covered with cut-steel openwork panels of scrolling arabesques, with small steel pins throughout for fastening, loop handle to top

The design clear, lock key for bottom compartment working, upper compartment with key-hole but no key, surface with some oxidisation and abrasion to steel as well as to mica underneath and discoloration in areas of the green, one side with a break to a part of the steel design with associated restoration, mica on lid with some cracks and a small chip, internal compartments with wear and dust to velvet consistent with age and use, as viewed.

Please note the following amendments to the printed catalogue: Please note that this lot can be attributed to either India or Europe, 17th or 18th century, and not India or Persia as previously stated in the online catalogue.
Christie's London, 25 April 1997, lot 351.

The influences of Safavid Persia can be seen on this box in its use of fine steel-cut arabesques on its surface whereas the mica ground and shape are firmly of the Deccan tradition. The cut-metalwork industry in India in the seventeenth century is known by a number of surviving objects, notably arms & armour such as a vambrace now in the Jagdith and Kala Mittal Museum of Indian Art, Hyderabad, inv. no.76.1526, attributed to Golconda (The Indian Heritage, Court Life and Arts under Mughal Rule, London, 1982, p.137, no.453).

The particular delicacy of the arabesques on this casket is striking and would have taken a highly skilled craftsman to achieve. A particularly beautiful example of this type of work is a perforated gilt-copper hawk-form standard in the Victoria and Albert Museum, London, inv. no.IM.163-1913, said to have been produced in Delhi in the seventeenth century (see M. Zebrowski, Gold, Silver & Bronze from Mughal India, London, 1997, p.289, pl.485). The green mica which can be seen between the cut steel forms is also typically Indian. Mica is a mineral found throughout India which was formed between the strata of granite, the mixture of heat and pressure creating fine transparent layers that were cut into thin sheets and often painted. See: (http://www.vam.ac.uk/content/journals/conservation-journal/issue-35/conservation-of-indian-mica-paintings/)