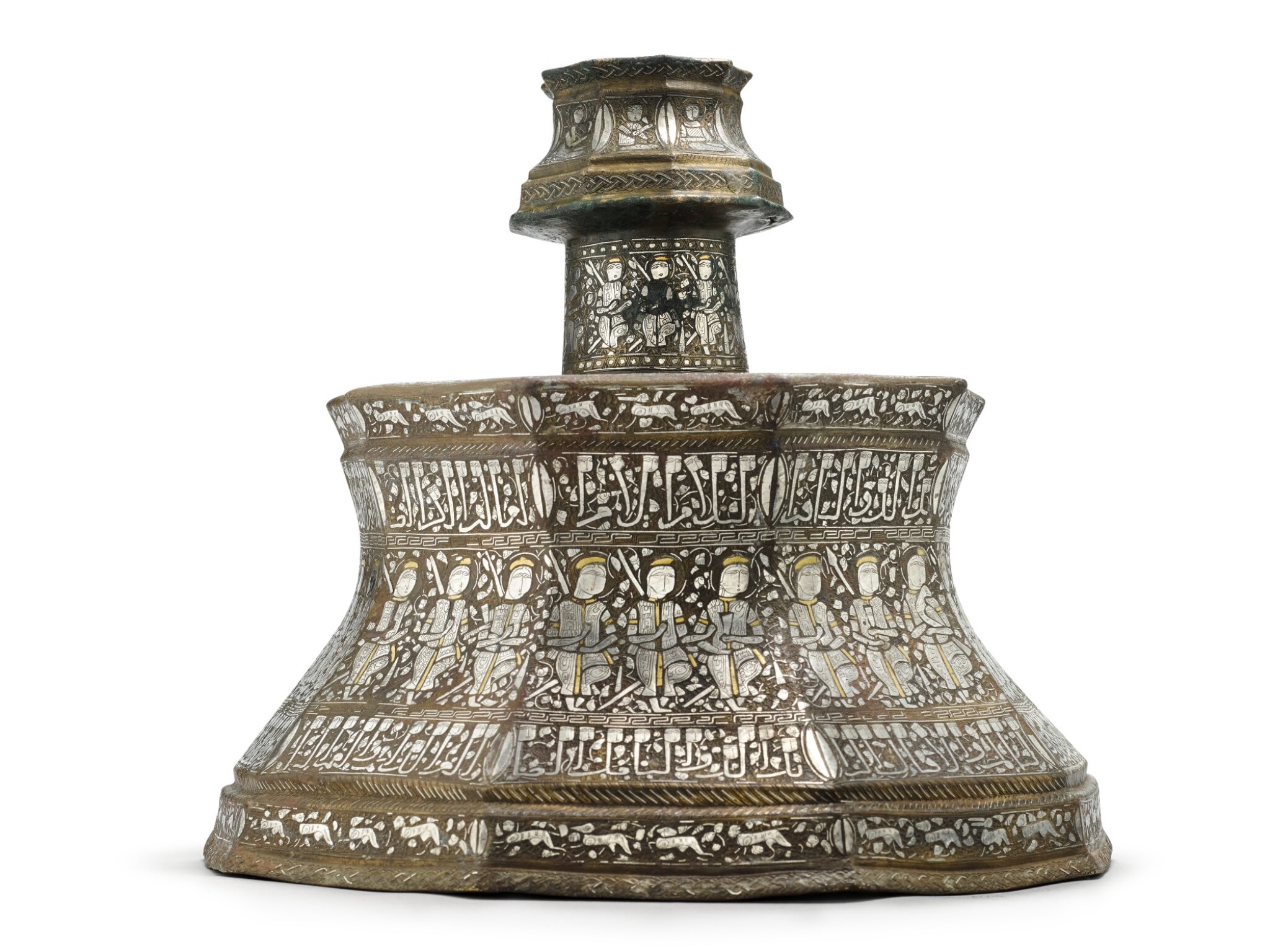 with truncated nine-sided faceted base, slightly depressed drip-pan with petalled edges, cylindrical neck with bulging socket, brass inlaid in silver and gold with incised details, the central band with a frieze of standing courtly figures between two friezes of anthropomorphic script and running quadrupeds, drip pan with figures and foliate designs within arches, smaller figures on the neck and seated musicians on the socket, underside with rosette

The silver remarkably well preserved, as well as gold highlights to robes on figures of central frieze, body with areas of oxidisation and abrasion resulting in some minor losses to silver and gold inlay, notably to the drip-pan with particular abrasion and losses, slight rust to edge of socket, one small crack to one facet near the base, the interior with oxidisation and abrasion including losses to the metal and some encrustation, as viewed.

On the body, upper band:
'Perpetual Glory and Safe Life and Increasing Prosperity and Perfect Good-fortune...'

The present candlestick is one of the largest and most imposing examples of a distinct family of facetted candlesticks produced in the Jazira in the thirteenth and early fourteenth centuries, and the fine condition of its silver and gold inlays make it a sumptuously radiant object. It is one of very few with large-scale figural decoration, and the only one to have a continuous frieze around the body. The frieze provides scope for a parade of soldiers and courtiers, suggesting strongly that this was a courtly commission. It is attributed here to Mosul a decade or two after the city fell to the Mongols in 1262. Mosul had been the premier centre for inlaid metalwork in the Near East in the first half of the thirteenth century, but the Mongol sack has long been thought to have ended its production – a view that is now increasingly being challenged. This candlestick marries large figures with a developing taste for elaboration, and demonstrates how metalwork in Mosul in the second half of the thirteenth century achieved the same level of technical virtuosity as work from the first half.

On the evening of 23 January 1333, the Mamluk sultan in Cairo, al-Nasir Muhammad, “sat at the palace gate and the emirs approached one by one according to rank, bringing with them candles. When the first had presented the candle he had brought he kissed the ground and withdrew. The sultan continued to sit there until their offerings were complete. The number of candles was 3,030 and their weight 3,060 qintar.” Three months later, on the eve of the marriage feast, those candles were lit at the palace gate. As al-Maqrizi relates, “All the emirs approached, each emir himself carried a candle, with behind him his mamluks carrying candles. They approached according to their order of rank and kissed the ground one by one throughout the night.” The night ended however in revelry as the sultan asked the wives of the emirs to dance “so they danced one after the other, while musicians beat on their tambourines.” (Allan 1982, pp.82-83).

These courtly ceremonies, charged with pomp and hierarchy, radiant with the light of thousands of candles, and pulsating to the sound of music and dance are brilliantly embodied in this impressive candlestick. Its body is decorated with a stately parade of twenty-seven courtiers, its neck and shoulder with eleven standing courtiers, and its socket with nine seated musicians, including two who play a tambourine. Its imagery gives a sense of both the silence of formal palace parades and the noise of joyous celebration. No ruler is included in the scenes but his presence is implied. This was an object fitting to light up a pageant at court.

This candlestick’s practical utility in no way lessens its prestigious status. That prestige was proclaimed by its generous use of silver inlay heightened by details in gold, and by its courtly iconography, but it was also inherent in the status of candles in this period. Candles – solid, often tubular, masses of wax or tallow encasing a central wick – are so familiar to us that we easily forget that beeswax candles in particular were expensive items eight centuries ago in both the Middle East and Europe. One of the emirs on this occasion, ‘Alam al-Din Sanjar al-Jawli, is said to have taken “a great deal of trouble over them and had them made in Damascus. They were very remarkable objects.”

The present candlestick is not, however, a Mamluk object. It was produced over half a century earlier, in Northern Iraq rather than Egypt, at a time when the region was under the control of the Mamluks’ great rivals, the Ilkhans. Its courtly imagery nonetheless belongs to a repertoire that featured in Mosul metalwork in the first half of the thirteenth century, and that was inherited by the Mamluks and the Ilkhans. An attribution of this candlestick to Mosul is borne out in detail by stylistic features, and more broadly by the candlestick’s form.

The present candlestick belongs to a distinctive species with concave, facetted bodies. At least twenty-five facetted candlesticks are known that can be attributed to the Jazira and Western Iran from the 1260s or 1270s to about 1330, and they divide into four sub-species, one of which, as with the candlestick here, has plain facets (for further information on these four groups, please contact the department). In the entire species this candlestick is exceptional in having large-scale standing figures — they form a steady parade around the body, their clockwise motion contrasting with the anti-clockwise movement of the framing bands of running animals and inscriptions. Additionally, it is not only one of the earliest of this type of candlestick, but one of the largest.

These facetted candlesticks include cast and raised examples. The present lot is raised, and on the underside features a rosette of a type found on numerous Mosul candlesticks and ewers from the first half of the thirteenth century (Raby 2012). This hints at a Mosul provenance but is not conclusive, as such rosettes were not exclusive to Mosul. The inlaid decoration of the candlestick, however, points strongly to a connection with Mosul.

The connections are evident in the treatment of the figures and their clothing. The standing courtiers strike a distinctive pose, one foot raised, toes pointing straight down to the ground. The raised knee caused the robe to billow out in front and then curve sharply inwards. This determinedly awkward pose is first recorded in miniature painting, seen in the frontispiece of volume XVII of the Kitab al-Aghani, produced in 1218 or 1219 AD for the ruler of Mosul Badr al-Din Lu’lu’. It became increasingly frequent on inlaid metalwork from the second half of the thirteenth century and into the next, but with increasing, often inept, stylisation and even misunderstanding. The treatment here belongs to a stage before these distortions, and can be compared to the that of two basins signed by Mawsili craftsmen, one by 'Ali ibn Hamud al-Mawsili, dated 673 AH/1274 AD, and another by 'Ali ibn 'Abdallah, attributable to the last quarter of the thirteenth century.

The courtiers on the candlestick have noticeably thin arms and long hands, and many of them hold their arms horizontally across their stomach, raising their right hand at a sharp, rather uncomfortable angle. They wear robes decorated with elaborate scroll folds or drop-repeat hexagons. All of these are traits found on 'Ali ibn 'Abdallah’s basin and characteristic of Ilkhanid inlaid metalwork in the late thirteenth century. A further connection is the use of a z-meander band and of gold inlay, a feature that became increasingly common in the last quarter of the thirteenth century.

These figural and decorative traits connect the craftsman who made our candlestick and 'Ali ibn 'Abdallah to a wider group of objects clearly made by several different craftsmen, with the number of objects and the number of different hands pointing to a vigorous output. 'Ali ibn 'Abdallah’s idiosyncratic manner is echoed, for example, on a group of high-quality wares that include a spherical incense burner in Berlin and pen boxes in Pesaro and Doha. Several other objects include imitations of his style, the influence of which continued into the fourteenth century, but the trend in these objects was towards increasing stylisation.

This candlestick belongs to a period following the fall of Mosul to the Mongols in 1262. The Mongol attack disrupted but did not destroy the city’s skill in inlaid metalwork. As late as the 1330s it was a major centre, as proved by the fact that the Ilkhanid ruler Abu Sa'id ordered from the city the largest surviving extant silver-inlaid object of the period, the Nisan Tasi, for the shrine of Jalal al-Din Rumi in Konya (now in the Mevlavi Tekke Museum, Konya). This candlestick belongs to the earliest phase of the revival of metalwork in Mosul after 1262. It demonstrates how the metalworkers were developing changes in the figural style and decoration, yet maintaining the highest levels of skill and craftmanship.

Our maker’s name remains unknown, but anonymity does not represent demotion, for he produced one of the most imposing of all the known facetted candlesticks and one of the most stately figural scenes from Mosul production of the second half of the thirteenth century. Above all, his candlestick is witness to the quality of the revival of Mosul metalwork after the Mongol devastation. His candlestick was surely proud enough to have spoken the words that 'Ali al-Sankari al-Mawsili’s candlestick uttered half a century later:

“I carry the flame and its repeated flickers.
Dress me in yellow garments.
I never attend a majlis
Without lending the night the raiment of the day”.

For a full report of this candlestick by Julian Raby, please contact the department.