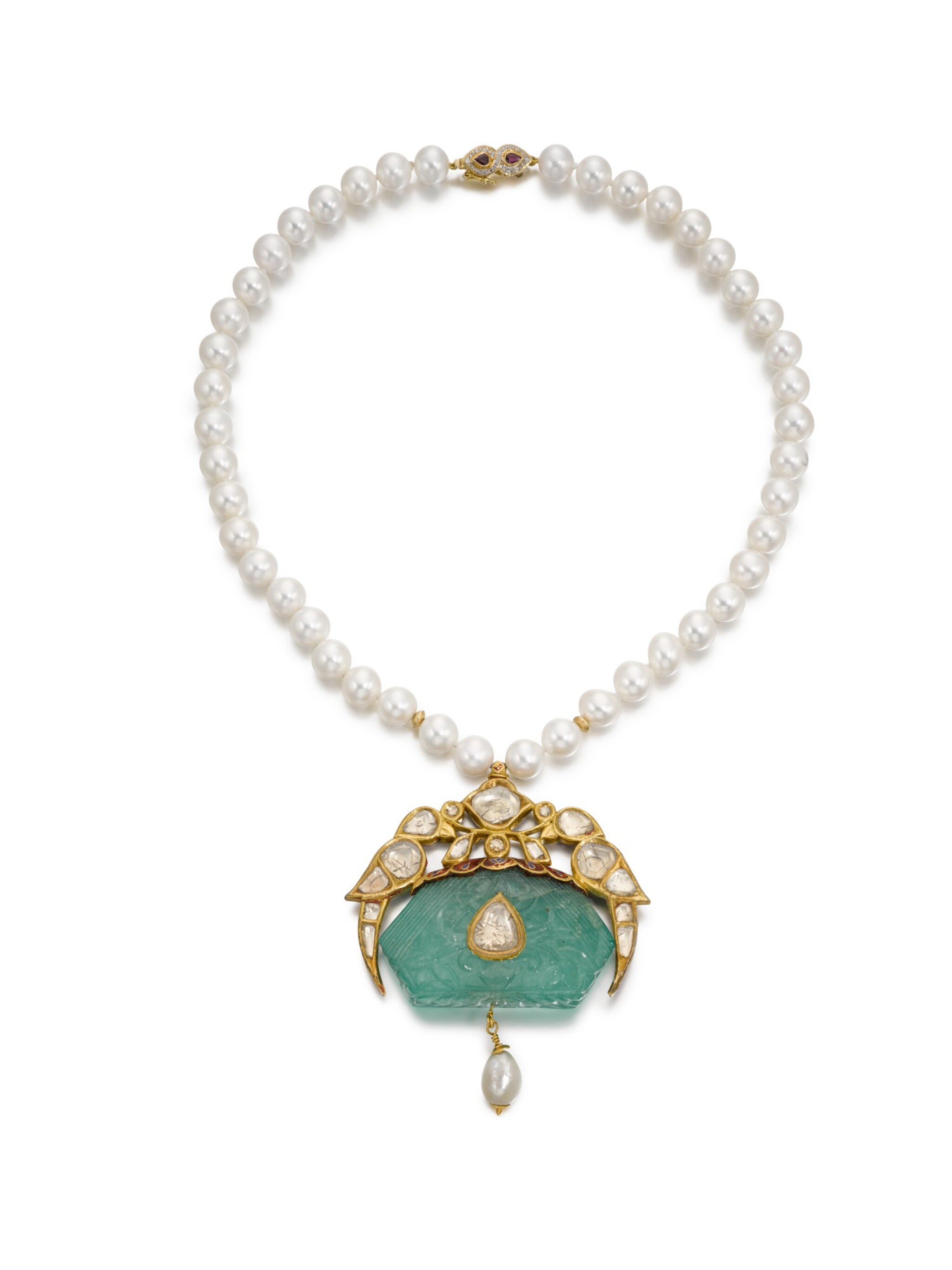 the large central emerald carved with foliate details around a lasque diamond to the front between parallel triangular lines, leafy motifs to base, the reverse with an arch between two meandering plants, with a suspended pearl, on a gold mount designed as two facing parrots set with lasque diamonds to the front and polychrome enamelling to the reverse, on a cultured pearl necklace

The emerald with natural inclusions, with vertical drill hole down centre from which hangs pearl (the pearls have not been tested), the diamonds with internal inclusions and very slight oxidisation to foiling on underside, some of the enamel on the mount, particularly to front, rubbed, but overall bright and generally in good condition, pearl necklace of later date, probably cultured, with modern clasp, as viewed.

Previously in the family collection of Shaikh Gholam Muhyi ad-Din, Governor of Kashmir (1832-45).

Shaikh Gholam Muhyi ad-Din held a number of roles under Maharajah Ranjit Singh, the first Sikh Emperor, also known as 'The Lion of the Punjab' (1780-1839), and his son, Maharaja Sher Singh (1807-43); including as deputy (mukhtar-i-kar) under Kirpa Ram. A number of silver coins stamped with his name and dated to his governorship are now in the British Museum, London (see inv. nos.1936,1017.10; 1853,0606.48).
India boasts an unbroken tradition in the decorative arts that can be traced back at least five thousand years. A notable spurt in the traditional jewelled arts of India took place in the late nineteenth century, a period that witnessed a marriage between the traditional craft knowledge of the Subcontinent and European fashions and taste of the time, as highlighted by this necklace.

Up until the death of the Mughal Emperor Aurangzeb (1707) it was common practice for the Mughal emperors to perform the ceremony of khil'at, where deserving courtiers and subjects would be presented with gifts as a reward for good service to the state.  Such gifts would include honorary robes, be-jewelled daggers, sashes (kamarband), and turban ornaments (sarpech). The regular bestowing of gifts to courtiers required a constant supply of jewels to be on hand.  Abu'l-Fazl (Ain-i Akbari, vol III, p.14) tells us of Akbar's twelve treasuries (khanzana) three of which were for precious stones, gold and jewellery. Along with these treasuries there would have been workshops within the palace complex, with craftsmen carrying out the many royal commissions. Abu'l-Fazl (Ain-i Akbari, vol III, p.16) mentions that the gems in the treasury were stored according to weight with emeralds coming first, followed by rubies, diamonds, pearls and sapphires. Retention of weight was an important factor in the fashioning of these gems so excessive cutting and carving was generally avoided. Rubies, emeralds and sapphires were often left en cabochon, the form in which they were naturally found.  Inscribing gems with the emperor's name was seen as a mark of appreciation for the quality of the stone.

This tradition continued into the nineteenth century and it is interesting to note that the emerald on this necklace was identified by Gübelin as being of Russian origin. Historically, emeralds were mined in Columbia and reached India via Spanish merchants as trade goods. Enormous quantities of emeralds were acquired by the Mughals and a strong trade developed with the Mughals purchasing the largest and finest quality of emeralds. The discovery of emeralds in Russia first took place in the early nineteenth century in the Ural Mountains, coinciding with the dating of the current example and demonstrating the continued desire for these gemstones by Indian patrons and the opening of new trade networks.

The mount for this emerald features two diamond-set gold and enamelled parrots facing each other. In Hinduism, the parrot was considered as a vehicle and messenger of Kama the 'God of Love' given the bird's capacity to imitate human speech. This is most illustrated by the Tutinama or Tales of the Parrot which comprises a collection of moralising fables compiled by Ziya' ud-din Nakshahbi in Persia in the fourteenth century. These centre on a pet parrot who, on successive evenings, recites fifty-two stories to keep his mistress enthralled at home whilst her husband is away rather than succumb to an adulterous affair with her lover. Eventually the bird is killed by her, thus enshrining the concept of faithfulness. Illustrated manuscripts were twice produced for the Emperor Akbar and are among the earliest extant works produced by his atelier (the majority of the miniatures from these now dispersed manuscripts are in the Cleveland Museum of Art and the Chester Beatty Library, Dublin).

The mount, designed as two facing parrots between a foliate branch, is set with foil-backed flat-cut diamonds. This was achieved by use of the kundan technique by which precious stones were set into hyper-purified gold that was refined into strips of malleable foil which develops an adhesive quality at room temperature. The gemstones, in this case diamonds, were then placed directly into this setting, on a polished gold or silver foil to highlight the gemstone’s reflection and colour. This rich design is further enhanced with a bright and colourful enamel layer to the reverse.

The present carved emerald necklace embodies the historical love of the Mughal elite for important gemstones, the symbolism attached to motifs such as parrots and the continued influence of Mughal jewellery on the European style.

This lot is accompanied by a Gübelin report numbered 16038051, dated 21 March 2016, stating that the emerald is of Russian origin, with indications of minor clarity enhancement. It also includes a Striptwist Ltd. report numbered 170567, dated 18 May 2017, confirming a confident attribution to the nineteenth century. Please contact the department for copies of these reports.