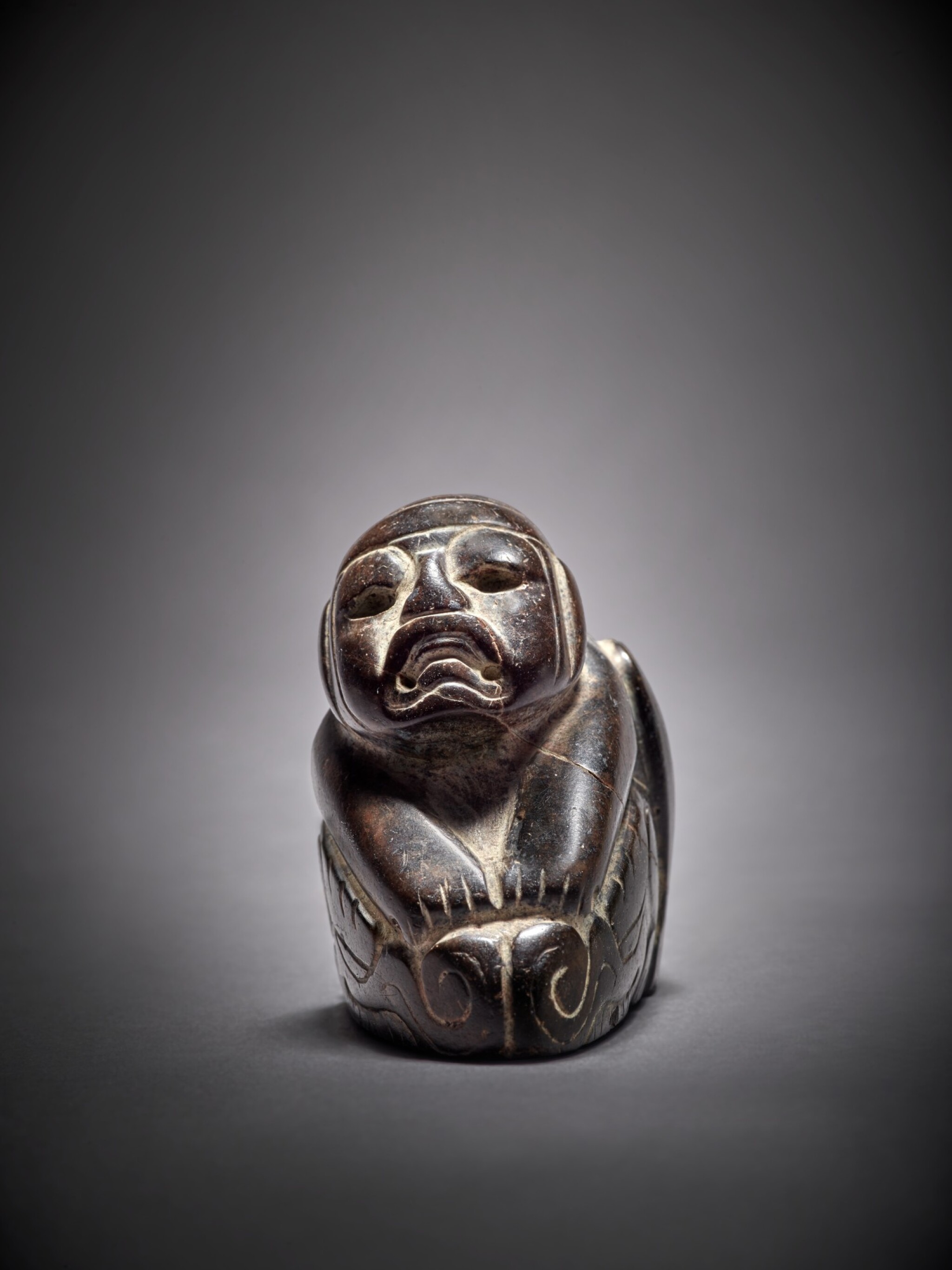 The ultimate representation of the shamanic journey traversing the levels of the cosmos is shown on this sculpture of a figure riding on the back of a supernatural Olmec dragon. The propulsion of the journey is conveyed with the contours and tensions of the shaman, as he looks upward, clinging with both arms stretched stiffly forward and his hands grasping the top of the snout. The figure is hunched forward with his legs tightly bent around the back (intact on left haunch), his large rounded head is encased in a helmet secured with bands and he wears a loincloth at the waist. The face is carved with classic Olmec features of trapezoidal full, parted lips, flared nostrils, deeply recessed eyes, and fleshy cheeks. As noted in catalogue for The Olmec World, the scholarly exhibition, “Carved in compact simple volumes, the stone is incised with geometric clarity.” (Michael D. Coe, et al., The Olmec World: Ritual and Rulership, Princeton, 1995, p. 186).

His vehicle for the cosmic journey is his spirit companion or nahual, the crocodilian cosmic dragon. The saurian is carved in low relief, with long curling snout baring teeth, elongated eyes beneath flame brows, and tightly bent limbs.

The supernatural dragon was one of the primary Olmec deities and was a cornerstone of Mesoamerican mythology and ritual power. Inspired by the common crocodile, Crocodylus moreletii, these saurians were known to grow to over 12 feet, and were adept and fearsome hunters that skimmed through the water surface with only eyes, scuts, and snout visible. They were the model of a liminal creature, able to navigate land and water thus traversing levels of the world.

Representations of this important crocodilian avatar were made in ceramic vessels, stone amulets, and large basalt carvings. For the Early Preclassic (1200 BC) ceramic vessel of the jaguar/dragon from Tlapacoya, see Elizabeth P. Benson and Beatriz de la Fuente, eds., Olmec Art of Ancient Mexico, Washington, D.C., 1996, p. 193, cat. no. 29. For the large basalt sculpture of the world-crocodile, Kaminaljuyu Monument 2, see Daniel Finamore and Stephen D. Houston, Fiery Pool: The Maya and the Mythic Sea, New Haven, 2010, pp. 226-227, pl. 71. The important La Venta Monument 6, is a sarcophagus of the Olmec dragon in which a ruler was placed for his journey to the afterlife.

The imagery of transporting a shaman figure on the back of a spirit companion was linked to the mythology of the creation of the world. For the ritual stone bloodletter carved with a figure on its stomach riding a supernatural, see Kent Reilly, “Art, Ritual and Rulership in the Olmec World”, in Michael D. Coe, et al., op. cit. p. 42, fig. 35, and see ibid., p. 185, cat. no. 63, for the Olmec Supernatural deity figure riding the back of a jaguar. In the later Maya era, a ceramic lidded vessel at the Dallas Museum of Art, (inv. no. 1972.10a, b), depicts the aged creator deity Itzamna riding a peccary, referencing the origin of the cosmos.