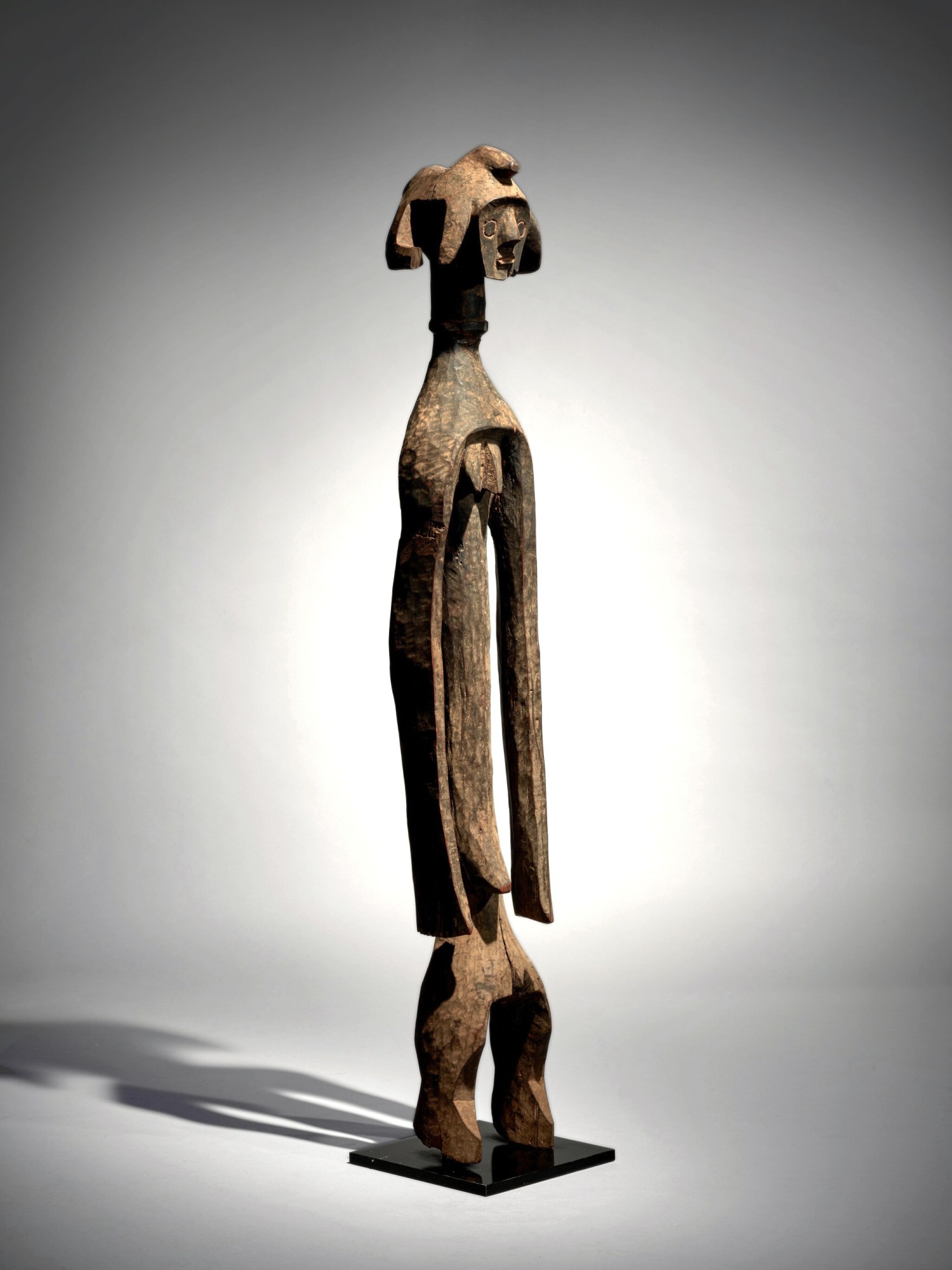 Jacques Kerchache, Paris
Private Collection, acquired from the above in August 1969

The art of the Mumuye people is one of the most celebrated and innovative sculptural traditions from Africa. Their distinctive and ingenious mode of representing the human form as a set of geometric volumes captured the wider attention of the outside world at a relatively late date. It was not until the 1960s that Philippe Guimiot discovered the extraordinary statuary of the Mumuye people, and Philippe Guimiot and Jacques Kerchache were the first to reveal this major form of African art to an audience of Western connoisseurs. The present figure entered the current collection in 1969, when it was acquired directly from Jacques Kerchache.

One of the only Western art historians to witness these statues being used in their original context was Arnold Rubin, who noted: "The high degree of stylistic diversity is paralleled by the variety of functions of Mumuye figures: some were used as oracles, others in connection with healing, and still others reinforced the status of important elders as embodiments of vaguely conceived tutelary spirits. Sometimes, one figure was employed in two or more of these capacities. A particular function cannot be correlated with size, style, or other formal attributes." (Arnold Rubin in Susan M. Vogel, ed., For Spirits and Kings: African Art from the Paul and Ruth Tishman Collection, New York, 1981, p. 155).

The dynamism of the figure's volumes are strikingly reminiscent of the vocabulary of Cubism, and the plastic study of movement undertaken by modern artists in general. As Christine Stelzig observed: "In view of their subtle configuration and overall design Mumuye sculptures remind the viewer not only of Brancusi, but also of Giacometti - or, to put it more correctly: many of Brancusi's and Giacometti's works are reminiscent of the magnificent works of these African sculptors." (Christine Stelzig, "Masterpieces of Sculpted Form: Mumuye Figures", in Oliver Wick and Antje Denner, eds., Visual Encounters: Africa, Oceania, and Modern Art, Basel, 2009, folio VIII, n.p.).

Prior to Guimiot's discovery of Mumuye statuary in situ in the late 1960s, the only accessible example of this tradition in Western museums was a figure that entered the British Museum in 1922 (inv. no. Af1922,0610.2; illustrated in William Rubin, ed., "Primitivism" in 20th Century Art: Affinity of the Tribal and the Modern, New York, 1984, Vol. 2, p. 597). There it did not fail to capture the attention of the young British sculptor Henry Moore, who studied the Mumuye figure's volumes in careful drawings made in his notebook of 1922-24 (ibid.; see p. 595 et. seq. for further discussion).