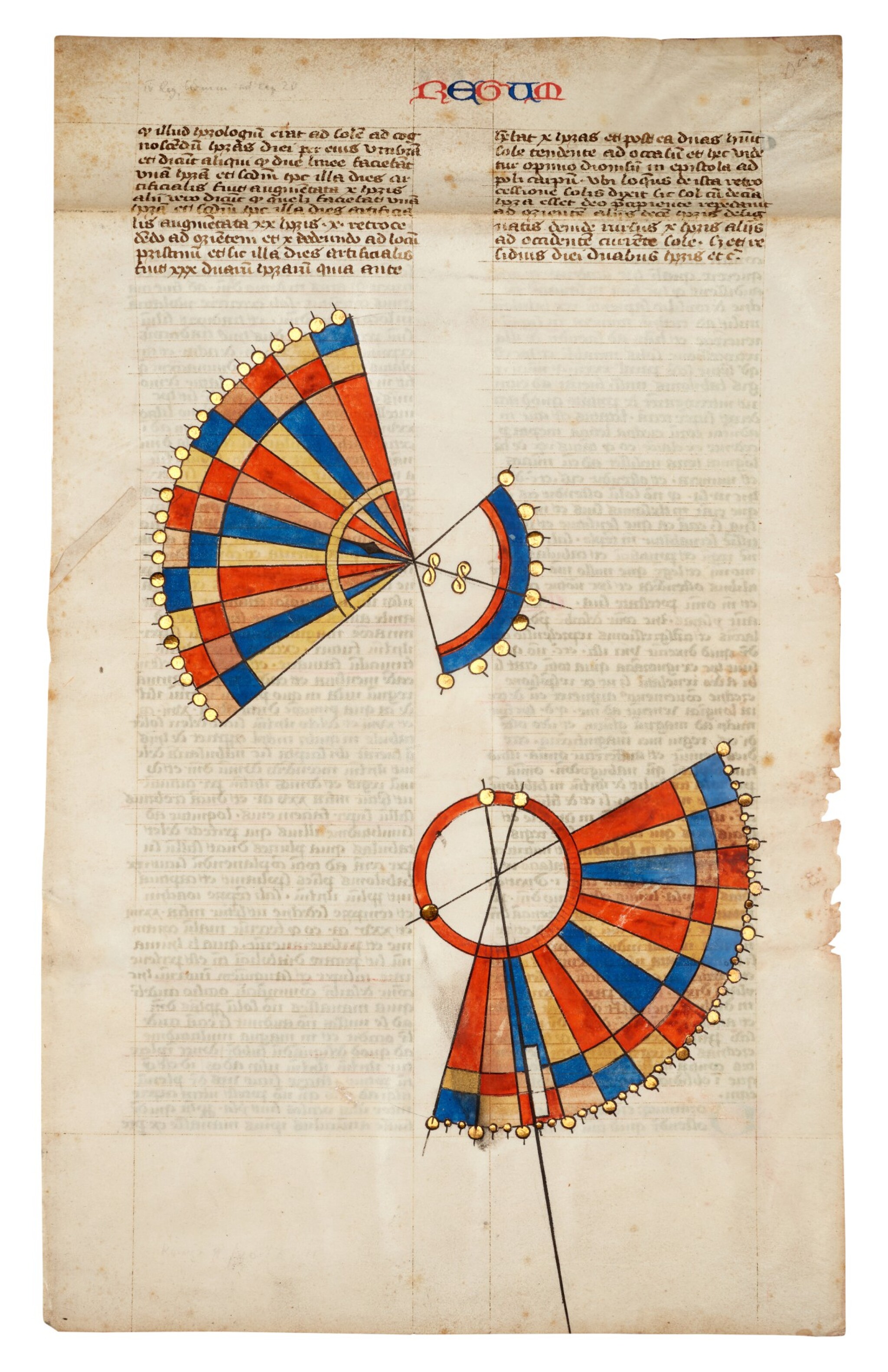 Diagrams depicting King Ahaz’s Sundial, on a leaf of from Nicholas of Lyra (d. 1349), Postilla Litteralis (Literal Commentary) in Latin

410×250 mm, a single leaf, ruled in ink for two columns of 66 lines (c.320×193mm), written in gothic bookhand, rubric in red, biblical quotations underlined in red, paraphs alternately red or blue, one two-line chapter initial in blue with red flourishing, running heading in alternate red and blue characters, ‘Regum IIII’, the text comprising chapters 20:9–21:16, followed by TWO VERY LARGE DIAGRAMS DEPICTING KING AHAZ'S SUNDIAL in red, pink, yellow blue and gold, with one horizontal crease 7 lines (c.65mm) from the top, some overall wear and staining, especially in the upper margin, slight damage to each side margin, including a slit with a medieval(?) parchment repair, not affecting any text or decoration, and overall in better condition than most of the sister-leaves.

The biblical references to the sundial of King Ahaz (Isaiah 38:8 and IV Kings 20:11) are often described as the oldest known mentions of any form of clock. The text relates how King Ahaz (also called Ezechias) prayed to God because he was sick and near to death; God told Isaiah that he would allow Ahaz to live for another fifteen years, and as a sign that his prayer had been heard, offered to move the shadow of Ahaz’s sundial either forward by ten degrees, or back by ten. Isaiah replied that the shadow would go forward by itself, so as a sign it should go backward, and this is what happened. The implication is that the sun temporarily reversed its direction across the sky before resuming its normal course.

The text is not very rare, but many manuscripts have blank spaces where the illustrations should go, and very few have decoration as lavish as the present copy. Yet the pictures are not merely optional embellishment: they were part of the author’s original plan and are often described or referred to in his text. Above the diagrams on the verso of the present leaf is the end of his explanation (which starts on the recto): from ‘quod illud horologium erat ad solem ad cognoscendum horas diei per eius umbram … currente sole sed et residuis diei duabus horis etc.’.

While some the other leaves depict easily recognisable subjects, such as the elevation of Solomon’s Temple and the ground-plan of the Tabernacle, the present diagrams are extraordinary for their apparently abstract designs, further emphasised by their striking colours and burnished gold.

Five leaves each with a miniature are described and reproduced in Bruce P. Ferrini, Catalogue One: Important Western Medieval Illuminated Manuscripts and Illuminated Leaves (Akron, 1987), nos. 28–32, and a sixth with an illuminated initial and border was sold in our rooms, 22 June 1999, lot 12; they were all acquired by the Schøyen Collection, Oslo and London (MS 221); subsequently deaccessioned, and acquired in 2011 by the Metropolitan Museum, New York (Inv. nos. 2011.20.1–6) www.metmuseum.org/art/collection/search/479483

Rudolf Martin (1864-1925), Swiss anthropologist, Professor at the universities of Zurich and Munich, with his(?) light pencil marginal inscriptions; thence by family descent. Other parts of his collection have been sold in Arts of the Islamic World, sales our rooms, e.g. 7 October 2009, 25 April 2012, and 24 October 2018